The Peerless Prognosticator is ON THE AIR!!! -- Caps vs. Rangers, October 8th

It’s Hockey Night on Fun Street as the Capitals host the New York Rangers. And today’s issue is – goaltending. Our precocious young netminder with the quick reflexes and the twitchy glove has been having his problems lately. For those of you keeping score, Semyon Varlamov has allowed at least four goals in each of the last six appearances, his last four playoff game appearances last May and his first two appearances in the 2009-2010 season. In those six appearances, he is 2-3-0, 4.94, .867. And if a technical weakness has been found, it is in his having a glove hand with holes in it.

So, this being a technical problem, we consulted a technical expert. Our old friend, Dr. Vynot Schootdepuck, Director of Advanced Applications at the Bettman Institute of Technology and Competitive Hockey. Dr. V, thanks for all your help. How have things been going at BITCH? 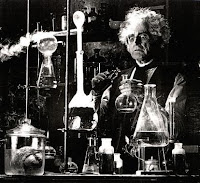 “Ja, vee are tezztink zum new gizmos und gedgets for ze goaltender who vants to be on ze cutting edge.”

And how has it gone so far?

The same Roberto Luongo with the 4.55 GAA and .820 save percentage?

How did that work?

So how do you think you can help Semyon Varlamov, Dr. V?

Well, it looks as if young Mr. Varlamov will have to wait to test the latest technologies from BITCH, because it is likely to be Jose Theodore getting the call for the Caps in tonight’s tilt against the Rangers. The Blueshirts come into this game a very different club than the one that lost to the Caps in seven games in the Eastern Conference Quarterfinals last spring. Of the 18 skaters that dressed for Game 7 in that series, seven have departed. Gone are Nik Antropov (Atlanta), Scott Gomez (Montreal), Lauri Korpikoski (Phoenix), Paul Mara (Montreal), Derek Morris (Boston), Fredrik Sjostrom (Calgary), and Nikolai Zherdev (as far away as possible).That is 64 goals worth of offense that has departed from a team that only had 200 goals last year.

The Rangers expect to make up at least half of that missing offense with newcomer Marian Gaborik. The trick there is keeping him on the ice. Since playing in 65 games for the Minnesota Wild in the 2005-2006 season (one in which he finished 38-28-66), he missed 104 games over the next three seasons. But even playing in only 142 games over those seasons he managed to score 85 goals. That’s a 49-goal pace over a full 82-game season. The term “high-risk/high-reward” certainly applies to Gaborik. If he can stay upright for 65-plus games, he could be a 40-plus goal scorer. If he plays half or fewer games for the Rangers, it’ll be an early spring.

The Rangers also added some offense in the form of Chris Higgins (12-11-23 in 57 games with Montreal last year), Vaclav Prospal (19-26-45 with Tampa Bay), and Ales Kotalik (20-23-43 in splitting time with Edmonton and Buffalo). They’ll join Chris Drury, who now has the burden of being the object of attention for his mega-contract ($7.05 million/year cap hit for the next three seasons) now that Scott Gomez is gone. In two years, he had had respectable scoring totals (25-33-58 two years ago and 22-34-56 last year), but he hasn’t been nearly the impact player the Rangers had hoped for.

But in adding these four forwards, the Rangers appear to have gotten softer, especially if uber-pest Sean Avery sits this one out. And that is where Donald Brashear comes in. Brashear is one of those super-heavyweights who no longer has to actually fight to influence the environment. Last year he had 11 fights (tied for 29th in the league), which was lower than his average of 15 fights per season in his 13 full seasons in the league. The difficulty faced by Brashear is that his talents seem ill-fitted to the way the league has evolved since the lockout. In the eight seasons preceding the lockout, Brashear averaged 8-12-20 per season playing an average of 74 games a year. Since then, he has averaged 4-5-9 a season, also averaging 74 games a year. Once a bruiser who could provide minimal production as a fourth liner, he has evolved into largely a one-dimensional player. Whether that dimension will be of sufficient value to the Rangers to merit $1.4 million in each of the next two seasons is debatable.

If the Rangers have a heart and soul player, though, it is Brandon Dubinsky. A player who is fearless about using his body to gain advantage, Dubinsky has enjoyed modest success as an offensive player, scoring 40 and 41 points in the his two full years with the club. A drawn out negotiation of his contract resulted in a two year, $3.7 million deal, and it could be a bargain. Dubinsky comes into this game leading the team in scoring (3-2-5) and is plus-5 in three games.

The blue line is a source of considerable uncertainty for New York. Wade Redden and Michal Roszival had seasons last year that were very difficult at times, and when you’re occupying $11.5 million of cap room, any difficulty you have will be magnified. Playing in New York magnifies it times ten. The two led the Rangers defense in scoring last year (Reddan was 8-22-30, and Roszival was 3-23-26), but the two were also securely on the negative side of the ledger (Reddan at minus-7, Roszival at minus-5) while each logging more than 22 minutes of ice time a night. With the more physical Paul Mara and Derek Morris gone, these two will have to raise their game.

At the other end of the spectrum, the Rangers have three very young defensemen, experience-wise. Michael Del Zotto and Matt Gilroy are rookies. Marc Staal is a comparative gray beard with 165 games at age 22.

But in the end, the Rangers’ fortunes rise or fall on the talented (and perhaps poufy) shoulders of goalie Henrik Lundqvist. Last year he had his “worst,” if you could call it that, goals against average in four seasons (2.43), the first year of his career that he was not a Vezina Trophy finalist. He did, however, set a career high in wins (38). He is already sixth in the all-time wins for the Rangers (144) and should leapfrog Dave Kerr (157) to reach the fifth spot before the season is half over. Among goalies playing in more than 100 games for the Rangers, Lundqvist ranks third in career goals-against and is first in career save percentage. Against the Caps he has been effective, if not particularly efficient. He is 8-3-2 against the Caps in the regular season for his career, 2.78, .905, with one shutout.

Are the Rangers, at this point in time, a reasonable approximation in temperament of their head coach, the excitable, often irritable John Tortorella? Probably not. The Rangers have some skill, but not in depth. Their defense really lacks physical presence and the feistiness that Tortorella brings to the bench. It is a team that could be prone to intermittent lack of focus, a trait that might be reflected in Tortorella’s taking a time out only 1:24 into the game against the Devils on Monday when the Rangers came out flat. It seemed to have the desired effect – a 3-2 win for New York – but it isn’t the sort of thing that can be regularly applied.

Gaborik has the ability to take over games at one end of the ice, and Lundqvist has the ability to do it at the other. More often than not, it seems, that will have to be the recipe for Ranger success this year. In this game, they cannot match the Caps depth of skill. It is that depth that should have the capacity to wear down a green defense and pound pucks at Lundqvist… that is, unless they try to get cute for the home folks.

It’ll be handshakes and head-rubs all around for the men in red, though.