The Peerless Prognosticator is ON THE AIR!!! -- Game 58: Capitals at Flames, March 8th

Now it gets serious.  After winning the last two games of their three-game home stand, the Washington Capitals head to western Canada on a three-game road trip.  And their journey begins by facing one of the most formidable teams in the league at the moment, the Calgary Flames, on Tuesday night

What a turnaround it has been for the Flames.  Last season, Calgary finished 26-27-3, fifth in the Scotia North Division and out of the postseason.  The Flames will go into Monday’s game against Edmonton with a 33-14-7 record, good for first place in the Pacific Division and eighth in the league overall.  That eighth-place league ranking does not do justice to how the Flames have played recently.  On January 22nd, they dropped a 5-3 decision to Edmonton to fall to 18-12-6 on the season.  Since then, however, Calgary is 15-2-1, the best record in the league over that stretch in points earned (31) and points percentage (.861).

The Flames have done it, in part, with a prolific and balanced offense.  Of 20 skaters to dress for Calgar over those 18 games, 17 have goals and 18 have points.  They have been led in goal scoring over this period by Elias Lindholm with 15 goals in 18 games tied with Patrik Laine and Gabriel Landeskog over tha period, dating back to January 23rd.  Lindholm’s career to date cleaves into two pieces as far as goal scoring is concerned.  The fifth-overall pick in the 2013 Entry Draft by Carolina, Lindholm spent his first five seasons with the Hurricanes, posting 64 goals in 374 games, a 14.0 goals per 82 games pace.  Since he arrived in Calgary in trade with Noah Hanafin for Micheal Ferland, Adam Fox and Dougie Hamilton in June 2018, he has 102 goals in 261 games in four seasons, including this one, a 32.0 goals per 82 games pace.  And, with 27 goals in 54 games so far this season, Lindholm is on a pace to finish with his first 40-goal season (41).

The odd thing about Lindholm’s production overall is that he has as productive, on a per-game basis at home (12 goals in 24 games) and on the road (15 goals in 30 games).  Of immediate concern to the Caps in terms of his home-road splits is that he has goals in eight of his last nine games at Scotiabank Saddledome (nine goals) after posting only three in his first 15 home games.  Lindholm is 10-5-15, even, in 23 career games against the Capitals.

Matthew Tkachuk is tied with Lindholm in total goals for the season, but what might be more interesting over the course of his career is a symmetry – 403 career games played, 403 penalty minutes.  One half of a brother team playing in the NHL (Brady plays for the Ottawa Senators), is perhaps the less ornery of the two, but such things are relative (no pun intended).  Brady averages 1.61 penalties per 60 minutes over his 250 career games, while Matthew averages 1.33 penalties per 60 minutes.  And, Matthew has a knack for drawing penalties, his net plus-54 in penalties drawn and penalties taken is more than three times better than his younger brother (plus-17).  Matthew also averages far fewer hits per 60 minutes (4.90) than does Brady (12.28). 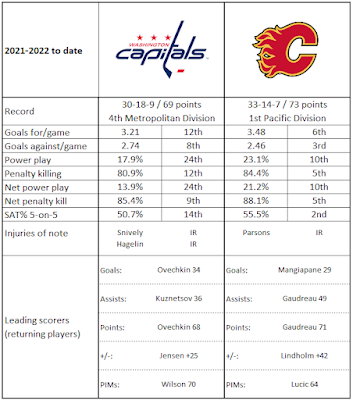 1.  On their recent 15-2-1 run, Calgary ranks second in the league in scoring offense (4.28 goals per game) and second in scoring defense (2.22 goals allowed per game).  Their plus-2.06 goal differential is best in the league, more than twice that of the next teams in line (Colorado, Tampa Bay, and Florida, all with a plus-1.00 goal differential).

3.  The Flames’ 91.9 percent penalty kill on home ice leads the league, and their minus-2 in net goal differential on the penalty kill at home (shorthanded goals scored, less power play goals allowed) is also best in the league.

4.  Only Nashville has allowed fewer goals in the first periods of home games (12) than Calgary (16).  The Flames are the only team in the league to allow fewer than 20 goals in each of the first, second, and third periods of games on home ice.

5.  Calgary has allowed the first goal in games only nine times in 24 home games, tied with Nashville and Colorado for fewest in the league.

2.  Alex Ovechkin has 242 shots on goal this season.  With eight more, he will hit the 250 shot mark for the 15th time in his career, tying Mike Gartner for second place, all-time.  Marcel Dionne did it 16 times.

4.  Washington has spread power play scoring around on the road.  Eight Caps have at least one power play goal on the road; 11 have points, including four with five or more points (Kuznetsov, Ovechkin, Backstrom, and Carlson).

5.  Only Toronto has more players with two or more shorthanded goals (three) than the Caps (two – Tom Wilson and Evgeny Kuznetsov).  However, Nic Dowd is the only Capital with a shorthanded goal on the road this season.

“Mangiapane” in Italian means, “eat bread.”  Small wonder that Andrew Mangiapane is nicknamed “Bread Man.”  And his season to date brings to mind a quote from former Capital Broks Laich – “"If you want money, go to the bank," Capitals forward Brooks Laich said two seasons ago. "If you want bread, go to the bakery. If you want goals, go to the net."  Mangiapane has been baking bread in batches this year, figuratively speaking.  In 54 games, the former sixth-round draft pick (166th overall by Calgary in 2015) has a team high 29 goals going into Monday’s action, eclipsing his previous career high of 18 goals in56 games last season with the Flames.

He has done it by being an uncommonly efficient shooter, his 21.6 shooting percentage ranking second in the league among 201 skaters with at least 100 shots on goal (Anaheim’s Troy Terry leads at 23.3 percent).  And it is not a fluke.  He has improved his shooting percentage in each of his four full seasons in the league, including this one, posting a 12.3 shooting percentage in 2019-201 and following that up with seasons of 15.6 and 19.8 percent before topping 20 percent this season.  Of 354 skaters recording at least 300 shots over those four seasons, Mangiapane ranks fifth in shooting percentage (18.1). Over those same four seasons, he leads the Flames in goals per 60 minutes (1.23) among 53 skaters to dress for at least 10 games.  And, his goal scoring matters.  In 24 games in which he has goals this season, Calgary is 18-5-1.  He goes into Monday’s action with 10 goals in his last 14 games (10-7-17, plus-12), over which the Flames are 12-1-1.  Mangiapane is 2-2-4, even, in four career games against the Caps.

The Caps, who were severely tested by Carolina last week and passed impressively, will be severely tested once more by another of the best teams in the league and the best home team in the league over the last seven weeks.  But the Caps are hardly pushovers on the road, their 16-7-4 record tied for sixth-best in the league by points percentage (.667).  It should make for an interesting battle to open the road trip.

Posted by The Peerless at 7:44 PM No comments: