Right out of the box in Tarik El-Bashir's weekly Q-and-A over at the Washington Post, a question about the playoffs came up...

...are the playoffs still a possibility, or are we in yet another rebuilding year...at what point do we make management changes?

Tarik El-Bashir: That's a tough question. It's way too early to say that they are completely out of it. But they've dug themselves quite a hole. They've got 13 points and there are six teams between them and a playoff spot. Are all of those teams going to tank? No. In fact, some of them, like Pittsburgh, are going to pick it up at some point. I would have to say it's going to be very difficult for the Caps to make up that ground.

Very difficult?...Here's how difficult. The Caps have 13 points in 18 games. If 92 points is enough to get in, they need 79 points in their remaining 64 games.

That is a 101-point pace over a whole season.

Now, go ahead and repeat the question in your own mind.

TSN.ca reports that in a half hour, Ilya Bryzgalov is going on waivers. He carries a manageable contract ($1.0 million this year, $1.363 million next year), is young (27), and has a sturdy record behind Jean -Sebastien Giguere in Anaheim.

If the Caps are going to shake up the team, goaltending hasn't been their problem, but...

edit...the figures in Bryzgalov's contract appear to cover the 2006-2007 and 2007-2008 seasons (the original TSN story indicated otherwise, since corrected), making him a UFA after this year, but...

Thanks to PuckMan93 on The Official for the directions to this story.
Posted by The Peerless at 11:26 AM 3 comments:

The Peerless Prognosticator is ON THE AIR!!! -- Caps vs. Lightning, November 16th

Yes, Caps fans, we must put last night’s excruciatingly frustrating 2-1 loss to the Florida Panthers aside, because today, it is a trip to the other side of the peninsula to face the Tampa Bay Lightning, and “lightning” is just what they’re playing like.

But it’s early in the morning, and we were perusing the morning paper (yes, we do read that ancient and archaic form of media each and every day…uncool as it might seem to some). And two stories caught our eye…the first was a story about new scans of an old critter – the “Nigersaurus” – that looks like an odd cross between Dino, from the old show, “The Flintstones,” and a platypus.

But there was another story, buried deep…very deep, you might say…in the news. It had to do with another discovery, one that will interest Caps fans. It was the discovery of…oh, shoot, let’s just go to the story…

Bratislava, SV (PPI*), November 15. Researchers from the Slovakian Academy of Prehistoric Studies (SAPS) disclosed today that they have uncovered an ancient “scoring beast,” as they put it, in a bog in the southeastern region of the country. 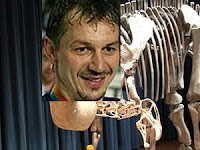 Researchers unearthed the skeleton of the dinosaur and named it “bondrasaurus,” or “scoring lizard.” The skeleton, measuring slightly less than two meters in length, suggests a creature built for speed. The legs of the bipedal creature permitted it to stay low to the ground – or in its case, ice, given its environment – and accelerate quickly toward its prey. The skeletal structure of the arms and wrists also suggested an ability to grasp implements and to yield them in a variety of ways, perhaps in a fashion where projectiles were shot at targets.

One of the researchers in the expedition commented that, “it is striking how this creature was built for what amounted to a singular purpose – to use its speed and eye-hand abilities to close in on its prey and propel objects at it, probably using fallen branches or other available instruments.”

Research indicates that the discovery is distantly related to the “bureasaurus,” a finding of which was discovered near Moscow a short time ago, and the “mogilnyasaurus,” discovered in the far east of what is now Russia.

Another member of the expedition remarked that, “curiously, the beast seems well adapted to its environment, but also could flourish in this era.” When asked in what capacity, the researcher said, “probably as a hockey player. There are teams that could use a creature like this that looks like it could score some goals.”

Well…how ‘bout that? Before we get to our second cup of coffee, what about the Lightning? Well, they’re on a roll. After losing six in a row, the last five of them in regulation, they’ve snapped off four wins in a row. In doing so, they’ve outscored the opposition 19-5. Clearly, they haven’t been having trouble scoring goals. They’ve been getting them from the usual suspects, too…Vincent Lecavalier has five of them (including a hat trick his last time out, against Carolina), and Martin St. Louis and Vaclav Prospal have three each. Their power play hasn’t been extraordinary – 3-for-18 over those four games (16.7 percent), but their penalty killing has slammed the door shut – 12 of 13 (92.3 percent).

If you’re looking for someone else to look out for (and “look out” might be heard a lot by Olaf Kolzig this evening), it might be Paul Ranger. He’s got a goal in each of his last two games, one of them being against the Caps, and he’s got respectable numbers from the blue line against the Caps – 2-4-6, +4, in 17 career games against Washington.

Johan Holmqvist has been in the nets for all four of those wins, posting a GAA of 1.25 and a save percentage of .958. Oddly enough, the team against which he has yielded the most goals in this mini-stretch…Washington. Yeah, it’s only two goals, but we need to find a ray of sunshine somewhere.

On the other side of the ice…it’s cold. 3-12-1 since the three-game winning streak to start the season. Here is how cold it is…

-- Michael Nylander is second on the club in scoring (5-12-17). That would be fifth on the Lightning.

-- Nylander is second in goals (five). Thet’d be..yup, fifth on the Lightning.

-- Viktor Kozlov’s nine assists, while second on the Caps, would be sixth on the Lightning (behind the aforementioned Paul Ranger).

-- Brian Pothier leads the Caps at +7…that would be, again, fifth on the Lightning.

And it’s not as if the Lightning have all that spectacular a record. At 9-8-1, they stand seventh in the Eastern Conference. But, they are 7-1-1 at home. Compared to their record at home (2-5-0), the Caps are veritable road warriors (4-6-1), but one would have to say that Tampa is coming into this game holding all the cards…

…well, maybe not. There are two Caps to watch tonight. In 29 career games against Tampa Bay, Michael Nylander is 9-23-32 and has three game-winners. Tomas Fleischmann might have only seven regular season games against the Lightning in his brief career so far, but he’s made them count. He’s 3-3-6, +3, and has a game-winner himself. If the Caps are going to get some offense from others, these might be the places to look.

The Caps beat Ottawa with their eight game winning streak in their own rink, the Caps can beat this team in its rink. And you know what?...they will…

Caps 3 – Lightning 2
* PPI...that's "Peerless Press International"
Posted by The Peerless at 7:52 AM No comments: 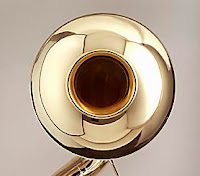 Okay, Caps fans, rise and shine, and don't forget your jerseys 'cause it's cooooold out there today.

It's coooold out there every day. What is this, Miami Beach?

Well, yeah…the Caps just lost there, 2-1. And you know, you can expect rough going later today with that, you know, that, uh, that lack of scoring thing.

Yessss, he is. But you know, there's another reason why today is especially grating.

Especially grating, okay, but the big question on everybody's lips...

On their chapped lips...

On their chapped lips, right: Do ya think Charlie is gonna come out and see his shadow? 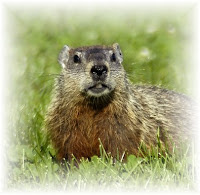 If Charlie sees his shadow, the Caps will have six more weeks of no one scoring. And one gets the feeling that Charlie has painted his shadow on the ground outside his hollowed tree trunk.

Another day, another Ovechkin goal…and no others. The Caps sank a little deeper into the league’s basement last night with a 2-1 loss to the Florida Panthers. It was another fine defensive effort wasted as the Caps couldn’t find any offensive traction, going long stretches of the game without any apparent strategy or purpose in the offensive end.

For those of you keeping score, Ovechkin – who scored his 12th goal of the season last night – has scored 11 of the Caps total of 34 goals in their 3-12-1 slide since the three game winning streak to start the year. For the year, Ovechkin has registered 12 of the Caps’ total of 41 goals. His 29.3 percent of production trails only Ilya Kovalchuk (30.6) among the top dozen goal scorers (Ovechkin is tied for fourth).

As for the game, it had that sameness to it that has characterized the Caps for the past month…an inability to finish opportunities, a power play that had difficulty entering the offensive zone under control (let alone doing anything once there), and an ill-timed error in judgment that ended up in the back of the net (and that in this case was the game-winner when Tom Poti threw a puck across ice, only to have it intercepted by Kamil Kreps, who reversed field and lifted a backhand past Olaf Kolzig).

Poti’s folly was the only really bad play of the night for the Caps, who otherwise played a pretty solid road game. But the trouble is, Groundhog Day lovers, that that Caps are getting nothing from anyone other than Ovechkin on offense, and that is itself breeding an interesting dynamic. In the three wins to start the season, Ovechkin averaged 19:54 in ice time. Since the Toronto game, over which the Caps have gone 1-5-1, Ovechkin has averaged 22:30. In his last four games, he’s gone: 20:45, 21:26, 24:49, 25:50. Part of last night’s heavy log was the fact that the Caps had to kill off only one power play, but there is a dog-chasing-tail aspect to this, too…other Caps aren’t contributing, but they’re not getting quite as much ice time, while Ovechkin gets more ice time, because the bench sees who is getting goals, but there is only so much he can do as one player, while other Caps aren’t contributing, as they are getting less ice time…It is in this respect that the absence of Semin is being felt. He might be eating up a few more of those minutes in an effort to getting something – anything – out of the rest of the roster.

It might not be that Ovechkin is bearing a larger share of the offensive load than in his previous two years, but the fact that he bears so much of it this year is especially striking, given what is supposed to be the offensive talent elsewhere on this roster, even with Semin out of the lineup.

If one looks at the numbers for this game, they really aren’t bad…the Caps had fewer misfires (10 shots blocked, 13 misses), they were roughly even in hits (18 to the Panthers’ 21), they had a few more turnovers (13, to nine for Florida), they dominated the faceoff circle (winning 29 of 47 draws). It really came down to one bad play…and a lot of plays the Caps just couldn’t, and at this point can’t, finish.

Pretty soon, the only thing "finished" will be the Caps' hopes of a playoff berth.
Posted by The Peerless at 6:26 AM 2 comments: