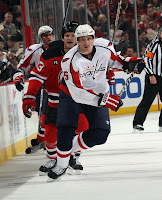 Theme:  “Nobody is forgotten when it is convenient to remember him.”
-- Benjamin Disraeli

There is one area in which Schultz has improved, though.  Last season he finished with his highest hits-per-game (0.91) in his six-year career.  It was comparable to the values for Karl Alzner (0.90) and Mike Green (0.84).  We mention this because some Caps fans seem to place considerable importance on this statistic with respect to Schultz.

Can we get back to semi-serious stuff?  If there is one thing that might linger as a reason Schultz will lurk on the edge of a third-pair spot it is that in 29 playoff games he is a minus-10.  He has been on ice for 27 goals against is 29 career playoff games (0.93/game).  That looks a lot like Mike Green (0.94 in 50 career playoff games), but there are two differences.  First, Schultz is a “defensive” defenseman.  He doesn't do anything else than to keep the other team from scoring.  If he is not doing that, then is there a reason for him to be out there?  Second, if looks to me like Green’s numbers are headed in the right direction faster than Schultz.  In his first three playoffs Green was on ice for 34 goals in 28 games (1.21/game).  In his last two post-seasons that number dropped to 13 in 22 games (0.59).  Compare that to Schultz, who was 13 goals on ice in 11 games in his first three playoff seasons (1.18) and 14 in 19 over his last three post-seasons (0.74).

The Big Question… Is Jeff Schultz suited to the sort of game Adam Oates wants to play?

Again, no one has seen Adam Oates coach a game in anger yet, so his philosophy is a big unknown to Caps fans.  We hear he will not be as buttoned down as Dale Hunter, but not as Animal House as Bruce Boudreau.  Even if he achieves a happy median, it might not look too good for Jeff Schultz.  After all, Schultz dressed for only 33 of 60 games under Hunter, and he did not distinguish himself in ten playoff games (no points, minus-7) in place of Dmitry Orlov, who was effectively benched for the post-season.

For Schultz, will a game that could be more up-tempo than what Dale Hunter implemented be compatible with his skills?  Well, Schultz was that plus-50 under Bruce Boudreau, so it is not as if he is a slug out there.  The answer to the question might be more in whether Schultz can shake off any rust that playing in only 126 of the last 164 regular season games might leave him with or if he can find happiness – or at least stability – with this, his third coach in the space of 11 months.

Last season was Schultz’ first as a “minus” player in his six-year career.  And while a minus-2 did not have quite the impact of a minus-8 from Dennis Wideman or a team-worst minus-15 from John Carlson, five defensemen playing more than 25 games for the Caps were on the plus side of the ledger.  Being a minus player should not be an expected result.  And for those who are counting, Schultz has the third most regular season games played for the Capitals since the lockout among defensemen (373), one fewer than Shaone Morrisonn and 25 fewer than Mike Green.  Youth is not an excuse for sub-par play, and at age 26 he is too young for regression in his game to seep in and be accepted as part of the normal course of a player’s career.

Morrisonn actually is an apt comparable here.  Let us set aside the irony that Morrisonn and the first round draft pick that became Schultz came to Washington in the same trade (along for a second roundr pick for Sergei Gonchar).  Morrisonn was almost exclusively a defensive defenseman who might put up 10-15 points, but who was expected to be solid, if not flashy in his own end.  He was just that for Washington for his first three-plus seasons in DC, seasons in which he averaged more than 20 minutes of ice time a night and was plus-14 in 237 games.  But then his ice time was cut (from 20:16 a game in 2007-2008 to 17:59 in 2008-2009) and slightly more again (17:34) in 2009-2010.  He left Washington for Buffalo as a free agent at the end of the 2009-2010 season.

It was a case of some – including Schultz – perhaps passing Morrisonn by.  Now we might have Schultz being passed by in ice time by Karl Alzner, John Carlson, and Dmitry Orlov.  It will be interesting to see if Schultz’ can recover enough of his game, if not to be the near 20-minute-a-game player he was in 2009-2010, to be a player who gets a sweater on a night-in, night-out basis.

Posted by The Peerless at 3:38 PM No comments:

Theme:  “Live as if you were living already for the second time and as if you had acted the first time as wrongly as you are about to act now!”
-- Vince Lombardi

At this time last year Dmitry Orlov was in rookie camp preparing himself for what was expected to be a season in Hershey in which he would develop both on and off the ice.  In fact he would be assigned to the AHL Hershey Bears in the first week of October, one of the last cuts of training camp.  His ability to stick around through both rookie and training camps was a harbinger of things to come.

Orlov, who already had 19 regular season and six playoff games for Hershey at the end of the 2010-2011 season, would not last that long at Hershey in his second visit.  He was recalled from Hershey on November 20th after 15 games with the Bears, the Caps needing a spark in the midst of 3-6-1 stretch.  It was a bit much to think that a rookie call-up could provide enough of a spark by himself, and the Caps continued their slide, culminating in the firing of Head Coach Bruce Boudreau a week after Orlov’s promotion.

Orlov stuck, though, playing in 60 of the last 64 games of the regular season.  He would finish the regular season fourth in total scoring among rookie defensemen, tied for second in assists, fifth in hits, 16th in blocked shots, sixth in takeaways, and in the top-25 in average ice time.  It was a very productive season for a youngster who was supposed to spend the year in Hershey.

His underlying numbers were what one might have expected of a rookie who was not thought of in the preseason as being a lock to make the parent roster.  He got a break in terms of quality of competition (173rd of 198 defensemen playing in at least 40 games) and offensive zone starts (82nd among that same group).  Even with those advantages his Corsi value relative to quality of competition was 170th of those 198 defensemen, and his offensive zone finishes were 156th  (all numbers from behindthenet.ca).  There were possession issues in his game that should not have been a surprise.

But with 60 NHL games under his belt he got a jump start on his development.  That is what makes the lockout unfortunate in terms of Orlov’s progress.  Delaying the chance to build on that experience for a month or two, or worse an entire season, jeopardizes those fortuitous gains.

Let us remember that Orlov is still only two months removed from his 21st birthday.  Since the lockout Orlov is one of only 14 defensemen between the ages of 18 and 20 in their first season who played in at least 60 games and recorded at least 19 points.  And that list is rather impressive, including as it does: Tyler Myers, Andrej Meszaros, Dion Phaneuf, Drew Doughty, Michael Del Zotto, Cam Fowler, Victor Hedman, Justin Faulk, and Erik Karlsson.

Guys, here are two words for you…”play offs.”  Orlov did not play so much as one second in the post season.  Jeff Schultz, who dressed for only 29 of the last 55 regular season games, got a sweater for 10 of the Caps’ 14 playoff games.  John Erskine, who dressed for one game – one game – out of the last 33 regular season games, got the other four playoff games as the sixth defenseman instead of Orlov.  Is he really ready for prime time?

Base on the company he keeps in terms of his first-year production, the temptation is to say “no.”  But of course, this is really a question that has only a speculative answer in advance.  His being withheld from the post-season did not appear to be a clear product of any late-season slump.  He was 1-8-9, plus-3 in his last 20 games while averaging almost 17 minutes a game.  It is certainly harder to shelter a player when the level of competition ramps up, as in the playoffs.  It will be difficult to do so this season if Orlov gets some of the minutes that Dennis Wideman took to Calgary.  But that is going to be part of the pain to be endured as Orlov develops the defensive side of his game.  His offensive game is further developed at this stage than his game in his own end, and one might expect in that regard that he will not suffer such a sophomore slump.

In the history of the Washington Capitals franchise, do you know how many defensemen aged 20 or younger played 60 or more games in their first season with the club?

Scott Stevens in 1982-1983, Robert Picard in 1977-1978, and Dmitry Orlov last season. Both Stevens and Picard enjoyed long NHL careers, Stevens playing for 22 seasons and Picard playing for 13 seasons.  This is not to say that Orlov’s upside is the Hall of Fame career assembled by Scott Stevens, but he has at least a toe-hold on the ladder to a productive career in the NHL.

Given the state of the Capitals’ roster, Orlov probably gets slotted as the fifth defenseman.  He has the offensive game to at least spell Mike Green or John Carlson on the power play squad (he averaged 44 seconds of power play time per game last season).  And while it is probably convenient to say he has to work on his game in the defensive zone, he was on ice for only 36 goals against in 60 games last season.  His goals against on-ice per 60 minutes at 5-on-5 was second best on the club.  That is a value that has to be taken in the context of his advantageous minutes and situations (especially when you consider that John Erskine had the best such mark), but he did not necessarily fail to suggest there is something to work with there.

For Dmitry Orlov the trick is going to be playing this season in a way in which he corrects the shortcomings of his first season.  That is how he can quickly become a fixture in the Capitals’ lineup for years to come.

Posted by The Peerless at 2:46 AM No comments: