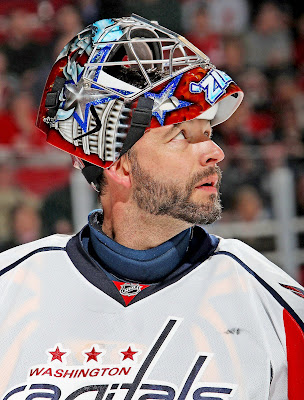 Olaf Kolzig's season is over in Tampa Bay. The St. Petersburg Times has the news from Tampa...

"Lightning backup Olie Kolzig will have surgery on Saturday to repair a ruptured distal biceps tendon in his left forearm. The surgery will be performed in Washington by orthopedist Ben Shaffer, a Capitals team physician who treated Kolzig when he played in Washington. Lightning head trainer Tommy Mulligan said Kolzig will be out three to four months. Unless Tampa Bay makes the playoffs, his season is over. It is unclear how this will affect the 17-year veteran's career. Kolzig spoke during Wednesday's practice and said he will not make any decisions about his future until the summer. He admitted, however, 'In my mind, there's a lot of doubt for my future as far as hockey goes.'"

If this is the end of Kolzig's NHL career, he has compiled an impressive body of work:

One hopes Kolzig can return from this to play another season and retire on his own terms, but this news -- and his comments -- is not good news in that regard.
Posted by The Peerless at 3:08 PM 2 comments:

"No franchise in the league needs more help than the Islanders, the team that time has forgotten. And no city could do more with the spotlight [of a Rangers/Islanders Winter Classic] than New York. The biggest market could use some love once in a while, too."

"The {Phoenix] Coyotes operate under an onerous lease. But that's exactly what previous owner Steve Ellman signed on for in exchange for his land-grab in Glendale, which was exactly the wrong spot to build a new arena and everyone but everyone knew it. Ellman didn't care. He got his land. But now the NHL is supposed to bail out the franchise? Now the NHL is supposed to pump money into an organization that, somehow, is paying head coach Wayne Gretzky more than $5.5M this year and will pay Gretzky between $7-and-8M next season? Please."

Bet you're thinking these are unrelated comments from unrelated writers. Well, you'd be wrong. They would have been penned by the same hand -- the first on January 18th, the second only last weekend.

Seems it's just fine for the league to put the 2010 Winter Classic outdoor game in New York for what is likely to be a deadly dull matchup between the Islanders and the Rangers just to save what looks to be a dying franchise on Long Island. It's just fine in Larry World (otherwise know as, "New York") for the league to forego ad revenue that a more attractive matchup might realize (and perhaps some potential additional ad buzz if the game is a hit). Brooks as much as acknowledges that a Caps/Penguins game -- the example he cited -- would generate higher ratings. But save Phoenix? Surely, you jest.

"Tampa Bay management can deny, deny, deny in the best tradition of all sorts of scoundrels, but it is most certainly true that 2008 first-overall draft pick Steven Stamkos is available for trade, at least according to two franchises that have been in contact with the Lightning and have no reason to fib about it."

What's in that guy's morning coffee?


Thanks to Krazijoe on The Official for the latest Larryism. 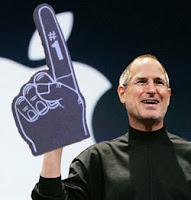 We do not think of this as a one-point game on a January night against the Bruins, but as Game 3 in a playoff series (the first two won by the Caps). These are teams that seem as likely as not to meet in the playoffs come the spring, and it’s as good a time as any to think in those terms.

That said, and after all the knashing of teeth about a “lucky bounce” (we think it might not have been so “lucky,” but we’ll get to that), the Caps lost game three because they couldn’t – yet again – kill penalties. Boston scored two of their three goals with the man advantage (on five opportunities). The Caps… 0-for-6. Game.

Let’s return to the first Bruin power play score at 14:12 of the second period. The Caps got to running around a bit (in the end, too much) in their own end. It starts with Patrice Bergeron diving to poke the puck and keep it in the offensive zone, but while he’s doing that, the Caps had their two forwards pointed – headed, it seemed – in the wrong direction… to exit the defensive zone. 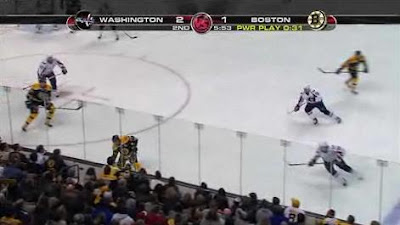 Then, three Caps are pinned to the left side of the ice as Bergeron passes the puck across to Marc Savard at the edge of the right wing circle… 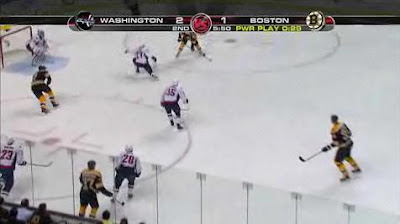 The Caps are left with two defenders – Boyd Gordon trying to get back into the play and Karl Alzner – in a nether land with Savard alone to shoot and Milan Lucic camped in front of Jose Theodore... 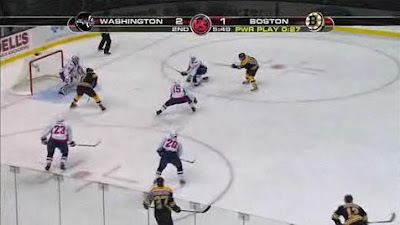 The result was predictable... 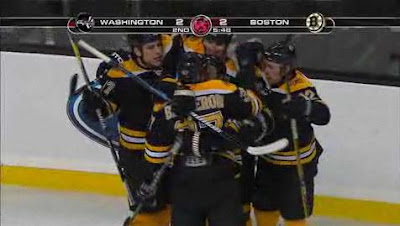 This makes nine consecutive games having allowed at least one power play goal. In that span, the Caps are 35-for-49 on the penalty kill – 71.4 percent. Just as alarming, that is seven times in the last eight games that the Caps have had at least five power plays to kill. The Caps are bad at penalty killing at the moment, and they’re getting lots of chances to demonstrate that lack of skill.

Almost lost in this was the pair of scares that the Caps got from the Alexes. Ovechkin suffered what was described as a “stinger” when he was checked by Zdeno Chara and fell awkwardly into the boards. Semin took a stick in the neck early in the third period from Chuck Kobasew but did return to play almost six minutes in the third period.

Way back in training camp, Michael Nylander, Tomas Fleischmann, and Chris Clark were matched on a line. There was some reason to think this could be a productive scoring line. Last night was the first time this season (49 games) the three combined on a scoring play, Nylander from Fleischmann and Clark.

Ovechkin suffering a stinger didn’t keep him from finishing with 16 shot attempts – or seven hits for that matter.

The Caps were credited with no giveaways… none. Every city seems to have its quirky scoring aspects. This must be Boston’s.

Nicklas Backstrom won seven of nine draws. Was somebody practicing over the break? Trouble is, that was his hooking penalty in the extra period that led to the final goal, and he otherwise had a pretty quiet game.

We’ve looked at that winning goal on replay a few times now, and we can’t help but think that when Shaone Morrisonn went down, David Krejci edged in with the purpose of trying to shoot the puck off of the defender. Sure, he might have been trying to thread a pass through to Marc Savard on the other side, but it sure had the look of Krejci gingerly shooting the puck with Morrisonn’s leg in mind.

Stop us if you’ve heard this before… outshoot the opponent 14-8 in the first period… other goalie plays well enough to keep his team in it… Caps can’t put the game away, carry only a one-goal lead into the intermission (and that coming on a goal with 21 seconds left). Outplaying a team as much as the Caps did (and have done with some regularity) early, and failing to put them away, only leads to bad results.

Michael Nylander played 16 minutes. That might not seem especially noteworthy, but it is only the second time since Christmas that he’s played more than 15 minutes (and no, he didn’t get any ice time in overtime).

The good news is that the Caps have earned five of a possible six points against the Bruins this season and have “won” the season series (The Bruins can earn only four points). But in the larger scheme of things, the series is now 2-1. But this was the first game in a treacherous 16-day span of seven games. Detroit comes to town on Saturday. That game is followed by contests against team that individually pose their own unique problems for the Caps. Relatively poor teams such as Ottawa or Los Angeles already have beaten the Caps this year, the Devils are hot, Florida has a very good defense, and the Rangers have Lundqvist.

And what makes this especially dangerous is that the Caps are depending on things that they probably can't sustain, things that in fact have shown some cracks -- winning every game at home (they've lost two of their last three) and keeping the other team from scoring any even strength goals (Boston scored one last night). The Caps simply have to find ways to kill penalties and to win on the road. If they don't...


Screen shots from NHL.com video.
Posted by The Peerless at 5:46 AM 3 comments: