Bloggers are the root of all journalistic evil (well, a lot of it)

“And he said unto them, Ye will surely say unto me this proverb, Physician, heal thyself: whatsoever we have heard done in Capernaum, do also here in thy country.”

There is an article in the Vancouver Sun, penned last Friday by Iain MacIntyre, that covers a lot of matters pertaining to potential player movement, but there was one part of it that homes in on bloggers in a less-than-flattering light…

“The hottest rumour from earlier in the week -- that the Columbus Blue Jackets were about to acquire the negotiating rights to Pittsburgh Penguin Ryan Malone and sign the power forward to a five-year, $25-million-US contract before he becomes an unrestricted free agent on July 1 -- was shot down by the player himself.

"’I don't want any team I go to to give up a possible teammate, Malone told the Columbus Dispatch. ‘So we're going to wait until the first.’

“The Blue Jackets do want to acquire Malone. But the story got ahead of the facts.

“That happens frequently in the Age of the Blogger, who has chewed down the standards of journalism the way the pine beetle has decimated B.C. forests (emphasis added).”

You’ll read about this in other places (Barry Melrose Rocks, Japers’ Rink, Tom Benjamin’s NHL Blog), and they do a good job of conveying the offense taken among bloggers who do, in fact, try to adhere to journalistic standards in a blogging context. But there is another aspect of this that had me rolling my eyes in amusement…

As in, “spare me the indignation.”

Anyone who takes the craft of journalism seriously, who has studied it and practiced it over the years will, as is true for any profession, respect and follow the standards that govern it. But it isn’t as if you can’t see a hint of cracks in the armor right there in McIntyre’s article (got to read further, after the sermon)…

“It was [Anaheim Ducks General Manager Brian] Burke, of course, who admitted then that NHL GMs will lie, deceive, confuse, distort and fabricate with impunity if its helps their position leading up to the draft.

"’It's like a British officer who's taken prisoner; it is their sworn duty to try and escape,’ Burke reiterated Thursday of lying at the draft. ‘If I can get someone to take a player because they think I want him, that means the guy I really want drops one more space. Everyone does it; I'm just the only one to admit it. I think it's more fun to toy with the group when you have a high pick’…

"…’GMs are liars,’ one player agent said, as if stating the obvious. ‘That's their whole thing. If they want stuff out there, they know who to contact. You see a lot of media types who stand in front of television cameras holding their BlackBerrys.’"

Imagine that…GM’s trading on desires among the “media types” (or “journalists,” if you will) to get the story first – often at the sake of accuracy (we are dealing here, after all, with what amount to lies).

Getting things wrong in a head long race to be first is of some (but not much) consequence, but generally, a persistence in the practice leads to becoming an object of ridicule. But sometimes, it matters (the 2000 Presidential election in the U.S. comes to mind, and I’m not aware that bloggers had anything to do with calling one, then the other candidate, then no candidate as the winner that night).

Blogging isn't as developed an art or science as is journalism. It is finding its way, which explains the desire among many responsible bloggers to respect journalistic standards in the absence of such standards for blogging. It doesn't make blogging the root of evil or the equivalent of pests denuding whole forests of journalistic standards. There is enough shoddy reporting among mainstream professional journalists to tempt one – well, me – to shout, “Please!…spare us the indignation reflected in comments comparing bloggers decimating journalistic standards to pine beetles decimating whole forests!!” First, it overstates the influence (in my opinion) of bloggers. Second, journalism would be better served by paying more attention to the admonition in the gospel according to St. Luke, “physician, heal thyself.”
Posted by The Peerless at 12:39 PM 5 comments:

If you click to an entry we made on the remaining free agents the Caps need to sign, you will find a couple of comments opining on the possibility of an offer sheet to be tendered to restricted free agent Mike Green.
This is not idle chatter or wild-eyed panic...it is a real possibility. Why, you ask? Well, just look... Green and new Lightning owner Oren Koules share a certain kinship with respect to hair style choices.
Throw this into the mix... 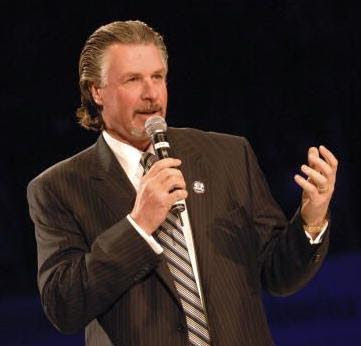 ...and there is more than a chance that the Lightning are poised to tender Green an offer.
Posted by The Peerless at 7:07 AM No comments: