The Peerless Prognosticator is ON THE AIR!!! -- Game 2: Capitals at Islanders, October 4th

The Washington Capitals wrap up their brief road trip to start the 2019-2020 season with a visit to Nassau Coliseum on Friday night, where they will face the New York Islanders in their season and home opener.  The Isles are coming off a remarkably successful, as well as unexpected season under first-year coach Barry Trotz.  The Isles, once among the elite franchises in the league, had descended into a mediocrity over the years bordering on irrelevance.  In 25 seasons before Trotz took over, the Islanders were 100 regulation losses under .500 (777-877-142, with 106 ties).  They reached the postseason eight times in those 25 seasons and reached the second round of the playoffs only once (2016).  They vacated a dilapidated structure in Nassau Coliseum in Uniondale in search of bigger crowds in Barclays Center in Brooklyn, and when that didn’t turn out as hoped, they made plans to return to their roots, if only temporarily.

Last season, the Islanders pushed the Capitals to the last weekend of the season before finishing second in the Metropolitan Division.  They did not do it with offense.  Anders Lee led the team in goal scoring (28), one of only three players with 20 or more goals for the Isles last season (Brock Nelson (25) and Casey Cizikas (20) the others).  Lee has had a bit of an up-and-down record as a goal scorer in his five full seasons with the club, going 25-15-34-40-28.  Nevertheless, Lee is among the top-15 goal scorers in Islander history (152/15th) and with a big season this year could jump into the top dozen (he needs 33 goals to pass Billy Harris for 12th place).

Last season, Lee was a streaky goal scorer.  Three goal scoring streaks of at least three games accounted for 11 of his 28 goals, and in addition he had a three-goals-in-four-games run to bring the total to half his goal output.  Conversely, he had four streaks of five or more games without a goal, including an 11-game drought from January 18th through February 14th.  To that add the four-game streak without a goal to end the regular season, and there were some dark spots on his resume.  It was a cold streak in the postseason that hurt the Islanders last spring; Lee had one goal on 20 shots in eight games.  Lee is 7-3-10, minus-6, in 22 career games against Washington.

Mathew Barzal led the team in points last season (62), but that total ranked only in a tie for 67th place league-wide (with Florida defenseman Keith Yandle).  And, 23 teams had point leaders with more points than Barzal.  Had Mark Stone not been traded from Ottawa to Las Vegas, that number would be 24 (Stone had 62 points with Ottawa).

As for Barzal’s season, it would be hard to say a 62-point season for a 20-year old second year player was a “sophomore slump,” but it was a significant drop from the 85 points he posted as a rookie, a total good enough for him to win the Calder Trophy as top rookie in 2017-2018. It was a case of a weak finish for Barzal last season.  He was 17-33-50 over his first 58 games, a dropoff from his rookie pace, but not alarmingly so.  However, in his last 24 games he was just 1-11-12 with an anemic 2.7 percent shooting percentage, and half of his points came in three two-point games in that stretch run.  In nine career games against the Capitals, Barzal is 1-4-5, minus-4.

The Islanders did not get elite level scoring from their defense last season, but they did get balanced contributions on offense.  Six defensemen finished the season with at least 18 points, a group led by Ryan Pulock (9-28-37, plus-21).  Pulock was part of a 2013 draft class that was deep in defensemen with the likes of Seth Jones, Darnell Nurse, Rasmus Ristolainen, and Josh Morrisey taken ahead of him, and even Nikita Zadorov, Shea Theodore taken behind him in the first round.  The 15th overall pick of that draft completed his second full season in the NHL last year, and in addition to leading the blueliners in goals (nine), assists (28), and points (37); he led the defense in ice time (22:22 per game), shots on goal (180), game-winning goals (three, equal to the combined total of the rest of the defense), power play goals (three), and was one of two Islander defensemen to appear in every game (Nick Leddy was the other).

Pulock is another of those Islander players who can make a surprising leap up the franchise record ladder.  With 35 points this season, he would pass Dave Langevin (107 points) and into the top-20 all-time in career points for Islander defensemen.  In nine career games against Washington, Pulock is 1-4-5, even. 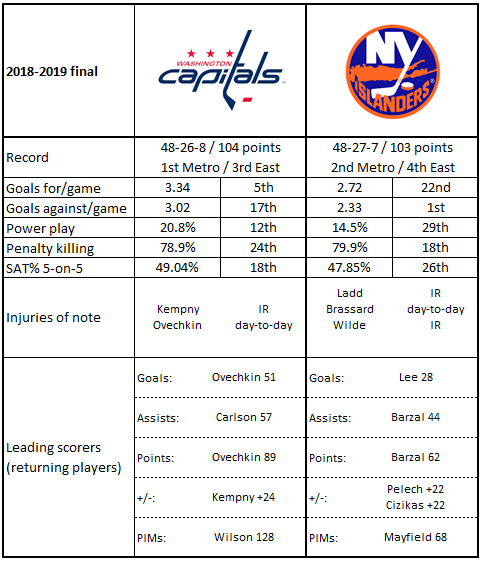 1.  The 48 games that the Islanders won last season was their highest win total since the 1983-1984 season, when they won 50 games and reached the Stanley Cup final for the fifth straight season.  Their run of four straight Cups was ended by the Edmonton Oilers in five games.

4.  Their poor shot attempt numbers aside, New York still managed to come out on top in close games.  They tied for the fourth-best record in the league in one-goal decisions (.594, with the Caps).

5.  Another manifestation of shooting not having much of an effect on Islander results, no team had more wins last season when out-shot by opponents than the Isles (31).

1.  With one point against the Islanders, Alex Ovechkin will have third place to himself in career points by a Capital against the Islanders.  He is currently tied with Calle Johansson and Bengt-Ake Gustafsson (54 points) and trails Peter Bondra and Michal Pivonka (62 points apiece).

2.  Ovechkin is the only active Capital with at least one overtime goal against the Islanders.  He has five.

4.  The Caps were among the most penalized teams in the league last year in one respect.  They had 31 games in which they were hit with ten or more penalty minutes, tied for seventh with the New Jersey Devils.  Four Metro teams (Rangers: 33; Flyers: 33; Devils: 31; and Capitals: 31) were in the top-eight (none of the Caps’ instances were against the Islanders).  If you are wondering, Tampa Bay led the league (35).

It has been more than 13 years since goaltender Semyon Varlamov was taken by the Capitals with the 23rd overall pick in the 2006 Entry Draft.  It would end up being a draft that for goaltenders might be described as “enigmatic” There was Jonathan Bernier, the first goalie taken in that draft (11th overall by Los Angeles), who has 324 career appearances in the league, but who has compiled them with five different teams, four in the last four seasons (Toronto, Anaheim, Colorado, and Detroit).  There is Steve Mason (3rd round/69th overall), who won the Calder Trophy in 2008-2009 as the league’s top rookie, in part on a league leading ten shutouts (one of only nine goalies in league history to record ten or more shutouts as a rookie and the first to do it in almost 40 years).  There was Michal Neuvirth, also selected by the Caps and with whom Varlamov battled for the number one spot, who ended up playing with four teams and would endure an injury-riddled career.

Varlamov played parts of three seasons in Washington, never appearing in more than 27 games in any of those seasons, before being traded to Colorado in July 2011 for a first and second round draft pick in 2012.  That first rounder would be used to draft Filip Forsberg.  We’ll just set that matter aside.  Varlamov played eight seasons in Colorado, and at the end of last season he was second in career games played in goal for the franchise (389, trailing only Patrick Roy with 478), second in wins (183, to Roy’s 262), second in save percentage (.915, to Roy’s .918; minimum: 50 games played), third in goals against average (2.72; minimum: 50 games), and second in shutouts (21, to Roy’s 37).  Then, last July, he signed a four-year/$20.0 million contract with the Islanders as an unrestricted free agent.

Varlamov takes over for Robin Lehner, now of the Chicago Blackhawks, who won the Jennings Trophy last season (with Thomas Greiss) for fewest goals scored against and who finished third in Vezina Trophy voting.  Varlamov is not unfamiliar with postseason recognition; he finished second in Vezina Trophy voting in 2013-2014 after leading the league in wins (41) and fourth in Hart Trophy voting.  What he has not done is appear in the postseason since that 2013-2014 season, and he bears a considerable burden in ensuring that the Islanders make a return trip.  Varlamov is 3-4-1, 2.50, .933, in eight career appearances against the Caps.

That point-per-game theme is something Oshie is also carrying over from last season.  In the 42 games he played in the 2019 portion of last season, he was 14-24-38, which was enough to propel him to 54 points, the fifth season in his last six that he topped 50 points and the fourth time in that span he passed the 20-goal mark (25).

How Oshie starts the season will be something that Caps fans will be watching closely, given how his season ended, with a broken clavicle suffered in Game 4 of the opening round playoff series against Carolina last spring.  The Caps lost that Game 4 and two of the next three games to head for the exits earlier than planned.

Oshie is not always thought of as part of the “core” that includes homegrown types such as Alex Ovechkin, Nicklas Backstrom, Evgeny Kuznetsov, John Carlson, and Braden Holtby.  But in his four years in Washington, Oshie is second to Ovechkin in goals scored (102 to 183), fifth in assists (106), fifth in points (208), second among returning Caps in plus-minus rating (plus-51, second to Kuznetsov’s plus-55), fourth in game-winning goals (16), and tops among returning Caps in shooting percentage (17.1).  This despite missing 37 games over those four seasons (seventh in games played: 291).  In 22 career games against the Islanders, Oshie is 10-13-23, plus-10.

The Capitals are a known quantity as the season starts with a winning pedigree in recent years, although the variable is now the backup goaltending situation and whether the new backup – Ilya Samsonov – gets the call in the front end of a back-to-back set of games.