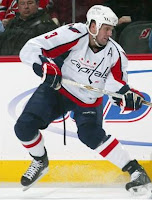 
Fearless’ Take: You kind of covered it in “the tens,” cuz…

23 assists in his last 56 games…that was on a pace to be his third best year in terms of assists, and he wasn’t getting the power play time that Mike Green was getting – more than two minutes fewer per game (2:39 for Poti to 4:41 for Green).

Poti also served as an effective pairing with Jeff Schultz over the second half of the season as the youngster was earning experience in his first full season in the NHL. On balance, while there remain some holes in his game, Poti proved to be a reliably good performer, if not the power play/offensive specialist that folks might have envisioned him being. There is every reason – with a full season in Washington under his belt – that he will continue to provide that kind of consistency in 2008-2009.

Cheerless’ Take: Two goals ties Poti’s lowest total in a full season in his career (he had two in 66 games in 2001-2002, split between the Rangers and Edmonton). It was the first season in his career he failed to notch a single power play goal. It was his first season without a game-winner. His strength is supposed to be as an offensive defenseman. And then there is the playoff thing…he’s been a “plus” performer only once in six playoff appearances. None of those six teams advanced past the first round, and they have a combined record of 7-24 in games. He’s been around long enough to ask, “do you think that’s going to change?”

The Peerless’ Take: Tom Poti arrived in Washington to fill a need. What was painfully absent in the two years following the lockout was scoring – or even a scoring threat – from the blue line, particularly on the power play. No Capitals defenseman had as many as 30 points in either of those two years. Only three times did a defenseman top 20 points. The top scorer over those two years, combined, among defensemen?...

This is the void that Poti was to fill. He was a minute-eater under the abbreviated tenure of Glen Hanlon, logging no fewer than 22:47 under Hanlon. But in those last 56 games, Poti logged less than that 25 times, including 10 games of less than 20 minutes. That was a function, it would seem, of the unforeseen emergence of Mike Green. But in those fewer minutes, Poti was more effective than he was under Hanlon, perhaps also a product of better health. Given his improved performance with fewer minutes, and the emergence of Green, it represented a win-win for the club. Poti might have found his niche as a second pair, second power play unit defenseman getting 20-22 minutes a night, capable of contributing more if need be.

Posted by The Peerless at 6:16 PM No comments: