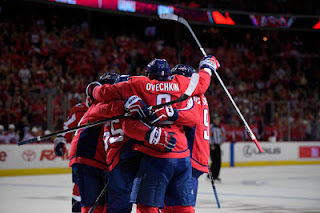 Well, here we are.  Again.  The Washington Capitals, tied with their postseason opponent, heading into a Game 5 on home ice that could be the key to moving on to the third round for just the third time in franchise history, or going home.  Again.  Another “two-and-through.”

On Saturday night, the Caps will host a Game 5 after splitting the first four games of a seven-game playoff series for the tenth time in franchise history.  The worst you can say about their history is that they are not very good at this.  The best thing you can say is, they’re getting better. 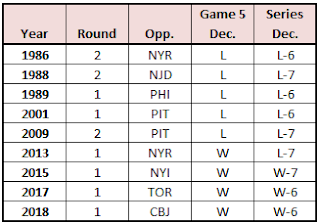 Perhaps there is something to “getting better at this” as far as the core group is concerned.  But every season – every postseason – is different.  The Caps will be trying to ensure that it is more of the same, extending their streak of series wins when tied after four games and home ice advantage to four.  They will hope it is different in that they finally vanquish this opponent.  And Caps fans who might be thinking that this year’s team really is something different will be hoping they don’t get fooled again.

Note: This has been edited to include this year's first-round series against the Columbus Blue Jackets.
Posted by The Peerless at 7:14 AM No comments: