The Peerless Prognosticator is ON THE AIR!!! -- Game 75: Washington Capitals at Minnesota Wild, March 28th

At this time of year a successful team is pursuing regular season milestones and records, and it certainly is true for the Washington Capitals as they head out on a five-game road trip, their longest of the season, beginning in Minnesota on Tuesday night when they visit the Wild.

The Caps set a franchise record on Saturday night when they defeated the Arizona Coyotes, 4-1, to secure their 31st home win, most in franchise history.  They also won their 105th game over two seasons, a record for wins by the club in consecutive seasons.  On Tuesday night in Minnesota, the Caps will seek to become the fifth team in franchise history to win 50 games in a season and do it in consecutive seasons for the second time in club history (they won 50 games in 2008-2009, then they won 54 games in 2009-2010).

These two teams met just two weeks ago, the Caps winning by a 4-2 margin at Verizon Center.  Since then, the Wild are 1-5-1, part of a longer struggle in which Minnesota is just 2-9-1 over their last dozen games.  In that span of time, Minnesota went from having a one-point lead on the Chicago Blackhawks at the top of the Central Division and Western Conference to falling seven points behind the Blackhawks in the Central Division and Western Conference standings.

Things really have not improved for the Wild since they faced the Caps back on March 14th.  They have had trouble scoring (15 goals, an average of 2.14 per game), and they have had problems keeping opponents from scoring (23 goals, and average of 3.29 per game).  Their scoring over those seven games has been led by a couple of veteran imports – Zach Parise (1-5-6) and Eric Staal (3-2-5).  Parise is in his fifth season in Minnesota (where he was born) after spending his first seven NHL seasons in New Jersey with the Devils.

If there are two things that characterize Parise’s five seasons in Minnesota, one is his scoring, the other is his durability, or sporadic problems with it.  Over the last five seasons, Parise is the leading goal scorer for the Wild by a wide margin (122 to 78 to Nino Niederreiter).  On the other hand, over those same five seasons he has missed 47 games to a variety of maladies (foot, concussion, lower body, upper body, back, illness).   And for the Wild, it matters.  Parise, who is fifth on the club with 17 goals this season, is on a pace to finish with 20 goals, which would be his lowest total in a full or injury-free season since his rookie year in 2005-2006, when he finished with 14 goals in 81 games with New Jersey.   The 17 goals he has this season have come in 15 games in which the Wild are 10-3-2; they are 34-21-7 in games in which Parise has not recorded a goal.  He is 8-16-24, minus-1, in 30 career games against the Caps.

Eric Staal leads the club in goals over the seven games since facing the Caps (three), adding to his team-leading total of the season (26).  Staal has been one of the most reliable goal scorers for the Wild in March, posting nine in 14 games this month, including goals in his last two contests.  It is quite a change from a February in which Staal recorded just one goal in 12 games.  What sets apart Staal’s goal scoring so far this season from previous seasons, it is his efficiency.  With 26 goals on 192 shots on goal, his 13.5 shooting percentage is his best since he shot 16.1 percent in 2005-2006.  He is a bit more efficient on home ice (14.3 to 12.9 percent), but his 26 goals have been split evenly, home and road.  Staal is 28-44-72, plus-3, in 73 career games against the Caps.

Playing defense is a tough job in the NHL, one that generally requires a physical presence that can stand up to the pounding one gets on a nightly basis.  It makes someone like Jared Spurgeon, all 5-feet, nine-inches and 164 pounds, look like an outlier (he is the lightest defenseman to have dressed in the NHL this season).  Still, he has had enough talent and moxie to survive seven seasons and 443 regular season games in the NHL, all with the Wild, although he was originally a sixth-round draft pick of the New York Islanders in 2008.  This season his 32 points is second among Wild defensemen to Ryan Suter’s 37 points.  Those 32 points are part of what is a career year on offense for Spurgeon, eclipsing the 29 points he recorded last season in 77 games.  Spurgeon, who is second among the club’s defensemen in shots on goal this season (133, to Suter’s 152), has only eight shots on goal over the seven games played by the Wild since they faced the Caps, none finding the back of the net.  He has liked home cooking, though, going 5-15-20, plus-19, in 37 home games compared to 3-9-12, plus-11, in 34 road games.  Spurgeon has little exposure to the Caps in his career, going 2-0-2, minus-3, in four games against Washington. 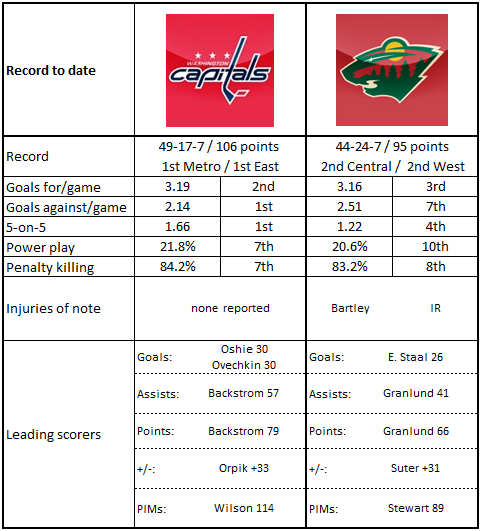 1.  Small wonder that the Wild have fallen on hard times recently.  Since they lost to the Caps, they are tied for 18th in goals scored (15), and only Colorado has allowed more goals (27) than the Wild (23).

3.  Minnesota has dressed nine defensemen this season. Eight of them have goals.  Only Gustav Olafsson has failed to record a goal, going without one in 13 games.

5.  For a playoff team, one that counted itself among the top clubs in the league a short time ago, the Wild struggle with possession.  They rank 21st in Corsi-for at 5-on-5 overall (48.82 percent), 20th when adjusted for score, zone, and venue (49.71 percent; numbers from Corsica.hockey).

3.  The Caps will be looking to reverse a poor stretch of road play on this trip.  They are 3-5-1 in their last nine road games.

5.  Washington is third in the league in Corsi-for when adjusted for score, zone, and venue (53.81 percent; numbers from Corsica.hockey).

Devan Dubnyk has had two distinctly different seasons in 2016-2017.  In his first 45 appearances he was 32-10-3, 1.97, .934, with five shutouts, and was a candidate to be a Vezina Trophy finalist.  However, in 16 appearances since then, he is 5-9-1 (one no-decision), 2.92, .897, and he is has slipped somewhat from the Vezina conversation.  It is really the first sustained stretch of adversity he has faced since joining the Wild in January 2015 after being traded to Minnesota by the Arizona Coyotes for a third round draft pick.  He has been among the best goalies in the league over the last two seasons, seventh in goals against average (2.26), fifth in save percentage (.922), and tied for second in shutouts (ten), even with his recent struggles.  If he is looking to come out of his slump against the Caps, that might be a tall order.  Dubnyk is 2-4-0, 3.39, .893 in six career appearances against Washington.

Marcus Johansson might be having the quietest career season imaginable.  He already has a career-high 22 goals and has a career high 48 points.  His plus-21 has obliterated his previous best (plus-12 last season).  He is shooting a career best 19.0 percent, and he is within a shift’s worth of time of his career high in average ice time (16:59 versus 17:32 in 2013-2014). Johansson is in the midst of his fourth consecutive and fifth overall 40-plus point season and seems a virtual lock to hit 50 points for the first time in his career.  With 18 even strength goals, he could reach 20 for the first time in his career.  And yet, he does it well within the boundaries of the rule book.  Johansson is the only active player in the league having appeared in more than 450 games (493) with fewer than 75 career minutes in penalties (62).  He has ten minutes in penalties this season, and his career high is 16 minutes in a season (2015-2016).  How few is that?  Since he came into the league in 2010-2011, there are 249 players who have had single games with 16 or more penalty minutes.  Johansson is 2-2-4, plus-6, in eight career games against Minnesota.

This is an opportunity for the Caps to take advantage of a team that is struggling.  Even at home, the Wild have had their problems, losing four of their last five games on home ice.  As for the Caps, they are in a bit of an odd position with this opponent.  Even with the Wild’s struggles, they are on a path to host a first round playoff series with, it would appear, either Nashville or St. Louis, and little would seem to be in the cards to affect that result.  Rather, it is the Caps who find themselves in a more urgent situation with regard to their standing.  They have a slim three-point lead on the Columbus Blue Jackets and Pittsburgh Penguins in the Metropolitan Division.  Depending on how they fare on their five-game road trip that begins in Minnesota, the Caps could solidify their position at the top of the standings, or they could find themselves in the unenviable position of giving up home-ice advantage in the first round of the postseason.  For the Caps, this is more of a “must-win” game than it is for the Wild.

Posted by The Peerless at 8:45 PM No comments: