The Washington Capitals and Columbus Blue Jackets locked horns tonight at Nationwide Arena in Columbus, and in a fight-filled contest the Caps came out with a 5-3 win to take the season series from the Blue Jackets.

It did not take long for things to get started in this one.  Alex Ovechkin scored his 42nd goal of the season in the fourth minute of the game when he set up in the slot and deflected a drive from the left point by Brooks Orpik past goalie Sergei Bobrovsky.

Eric Fehr doubled the Caps’ lead late in the first period, taking advantage of a loose puck off a shot from Tim Gleason.  Standing to the right of Bobrovsky, Fehr was left unattended, and before Scott Hartnell could close the distance to tie him up, Fehr snapped the puck past Bobrovsky from the edge of the blue paint of the crease.

That would do it for scoring in the first period, but Columbus halved the lead early in the second on a slap shot from the top of the right wing circle.  The one-goal margin lasted less than a minute.  Columbus was caught with too many men deep in the Caps’ zone, and when the puck squirted out to the top of the zone, Jason Chimera and Tom Wilson were off on a two-on-one break.  Chimera’s tried to deke Bobrovsky to the ice and curl the puck around him, but Bobrovsky made the initial save.  Trailing the play, Wilson popped the rebound into the back of the net, and the Caps were up 3-1.

Scott Hartnell scored for Columbus at the 15:03 mark on a redirect from the high slot of a Jack Johnson shot from the left point to make it 3-2 heading into the second intermission.  Ovechkin got his second of the game in the fourth minute of the third period on a power play when he one-timed a shot from the left circle that seemed to handcuff Bobrovsky.

-- Jason Chimera added a pair of assists for the Caps, his second multi-point game in his last four contests.

-- The Caps and Blue Jackets had four fights in this game.  That makes seven for the season between the two clubs, one fourth of the Caps’ total for the season (28).

-- Ovechkin’s second goal was the game winner, giving him game-winning goals in consecutive games and three game-winners in the Caps’ last four wins.

-- Tim Gleason and Michael Latta were the only Caps not to record shots on goal, and Latta skated only 3:38, departing early in the second period with an injury.

-- Curtis Glencross had an uneventful debut for the Caps.  He had two shots on goal (no points), three hits (led the team), and two blocked shots, but he was on ice for Columbus’ first two goals.

-- Each team had 40 minutes in penalties for the game, but there were only four power plays, two for each team, each team converting once.

-- Tim Gleason’s assist on Eric Fehr’s goal was his first point as a Capital and broke a personal 15-game streak without a point, including 14 in a row with Carolina.

-- This was Washington’s 17th road win of the season, matching their total for all of last year.

It was a rough and tumble game, but it was a good win for the Caps.  It enabled the Caps to close to within a point of Pittsburgh for third place in the Metropolitan Division and to within a point of the Detroit Red Wings for fifth place in the conference.  The nine goals scored over the last two games is the most over consecutive games in two months (ten in wins over Florida and Toronto on January 4th and 7th).  It sets the Caps up well for the remainder of the week, games against Minnesota and Buffalo that are certainly in the winnable category.  On this night, though, the Caps did what they had to do – deal with a struggling opponent effectively and move on to the next opponent.

Posted by The Peerless at 10:45 PM No comments:

Experience and Partnership: The Effects of Recent Events on Mike Green 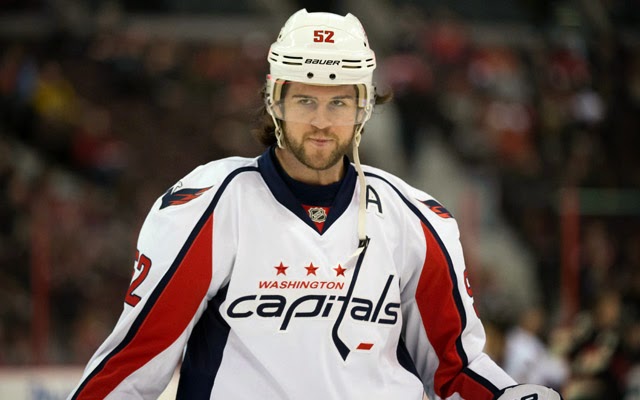 Over the past few days, the topic of defensemen has figured prominently here and here over at Japers' Rink.  The point being that the Washington Capitals have a sixth defenseman, and one that adds experience to what is already a much more experienced group than the team dressed last season.

However, there is another point to this that we would like to explore.  Over the first 63 games of the season, that sixth defenseman spot was one that might have made the fifth defenseman – Mike Green – feel as if he was engaged in a speed dating session (even if it did last 141 days).  The first pair of John Carlson and Brooks Orpik was a stable offering on a night-to-night basis, as was the second pair of Karl Alzner and Matt Niskanen.  However, until the Caps obtained Tim Gleason from the Carolina Hurricanes this past weekend with the aim of filling that role, Green had a lot of suitors sitting in that chair across from him in an effort to be that sixth defenseman.

For Green, the stability that comes with knowing who his partner would be on a consistent basis was absent from his game this season.  How has that instability manifested itself?  There is the immediate notion of partner time shares.  If you look at the pairs, consider first the share of 5-on-5 ice time through the Caps’ first 63 games spent with other defensemen by the Carlson-Orpik pair (all 5-on-5 ice time numbers from stats.hockeyanalysis.com):

Carlson and Orpik have logged the most 5-on-5 ice time individually, and more than 80 percent for each one has been spent with the other.   Even with the preponderance of ice time spent with the other there is something to note about their time spent with Green.  Carlson has a history with Karl Alzner, his partner of years past; Orpik has a familiarity with Matt Niskanen, who came with him from Pittsburgh as a free agent.  For both, though, their third most frequent partner is Green.  This should not be all that surprising, given that these five defensemen lead the team in games played (Carlson, Orpik, Alzner, and Niskanen played in all 63 games covered in this review; Green played in 54 contests).  And, it is certainly possible that the ice time totals for any partner other than their regular partner has a certain amount of noise associated with ice time shared during changes on the fly during games (this might account for some of the “righty-righty” ice time of Carlson and Green, for example).

As for the second pair of Karl Alzner and Matt Niskanen, a similar pattern applies with respect to their time spent together and with others:

Again, we have individuals having spent more than 80 percent of their time with each other, and we have the flip side of the discussion above, that once you get past the familiarity each member of this pair has with their second most frequent partner (Carlson for Alzner, Orpik for Niskanen), there is Mike Green.

Which brings us to Green and that well-frequented spot on his left.  Let’s look at Green and the other defensemen to have dressed for the Caps this season and their respective 5-on-5 ice time: 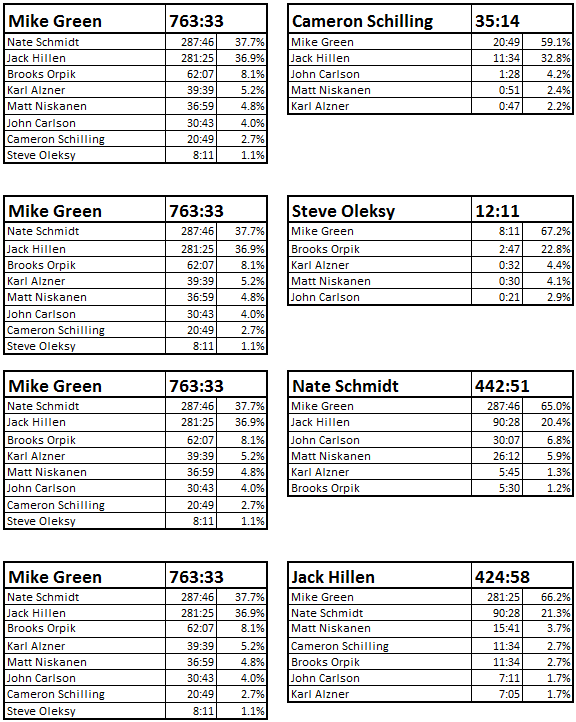 First, there is Green’s ice time.  Whereas each of the defensemen in the top two pairs have spent more than 80 percent of their 5-on-5 ice time with their principal partner, Green has not spent half of that (as a share of total ice time) with any defenseman.  The majority of his 5-on-5 ice time (about three-quarters of his total) was roughly split between Nate Schmidt and Jack Hillen, one a youngster in his development phase, the other a depth defenseman of modest achievement and whose presence in the Caps’ lineup was intermittent (his longest streak of games played this season was 15, largely the product of Schmidt sustaining a fractured shoulder blade after he was reassigned to Hershey to benefit from more ice time).

There is also the nature of Green’s partners.  In years past, whether that partner was a Jeff Schultz (with whom 58 percent of Green’s 5-on-5 ice time was spent in 2009-2010 and 2010-2011 seasons) or a Karl Alzner (with whom Green spent 78 percent of his 5-on-5 ice time in 2012-2013), Green has had the benefit of a stay-at-home partner that gave Green a measure of freedom to exhibit his offensive gifts (his bouts with injury seemed to interrupt his performance more than his partners).

That changed some last season when Green spent the largest share of his 5-on-5 ice time with Dmitry Orlov (41 percent), more of an offensive defenseman than previous partners, but last year Green started seeing significant shares of his ice time spread among more defensemen.   In addition to that of Orlov, Alzner occupied about 20 percent of Green’s 5-on-5 ice time as a partner, Nate Schmidt about 18 percent, and Jack Hillen about 11 percent.

Looking at things from the other side of the ice, the other four defensemen that were not part of a steady pair and who were paired with Green intermittently – Schmidt, Hillen, Steve Oleksy, and Cameron Schilling – had Green as their principal partner in each instance.  All had Green as their partner from 59 – 67 percent of the time at 5-on-5 (although in the instances of Schilling and Oleksy the total 5-on-5 ice time for each amounted to 35 or fewer minutes).  It almost seems that, at least in the case of Schmidt, Oleksy, and Schilling (a combined 92 games of NHL experience coming into this season), there was a revolving mentor/apprentice relationship that characterized the third pair more than a steady relationship built over the course of a season.

This year, Green has lacked the steady partnership that characterizes the top two pairs.  That matter has, as the Caps and their fans hope, been rectified by the acquisition of Tim Gleason from Carolina.  It might be that Gleason’s contributions are meager, at least from a top end numbers perspective.  However, what might bear watching in the new relationship is how the partnership affects Mike Green.  He will have that regular stay-at-home partner that he has not had over the past two seasons, and it might be that having that sort of got-his-back partner will once more open up Green’s 5-on-5 game and give the Caps an added dimension to an attack that has enjoyed considerable contributions from the back line this season.

Posted by The Peerless at 1:02 PM No comments: