Your Simulated Caps at the Simulated 30-Game Mark

With their simulated win over the simulated Tampa Bay Lightning last night, the simulated Washington Capitals wrapped up their first 30 games of this simulated 2012-2013 season.  The Caps hit the 30-game mark with a record of 17-10-3.  Their 37 standings points have them trailing Carolina by one point in the Southeast Division (17-11-4) and leave them fourth in the Eastern Conference.

To date, the Caps’ longest winning streak has been six games, from October 31st through November 10th.  Their longest losing streak has been four games (0-3-1) from October 20th through October 29th.  Special teams have been efficient, if in some respects not effective.  On the penalty kill the Caps rank fourth, killing off 87.2 percent of their shorthanded situations.  On the power play side the Caps rank second in power play efficiency at 21.1 percent.  However, they rank last in the league in power play opportunities (76).

As for the skaters, the leaders are as follows: 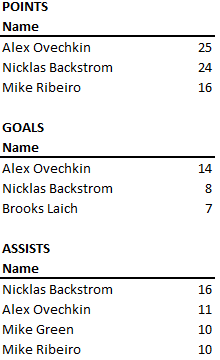 Posted by The Peerless at 11:07 AM No comments: 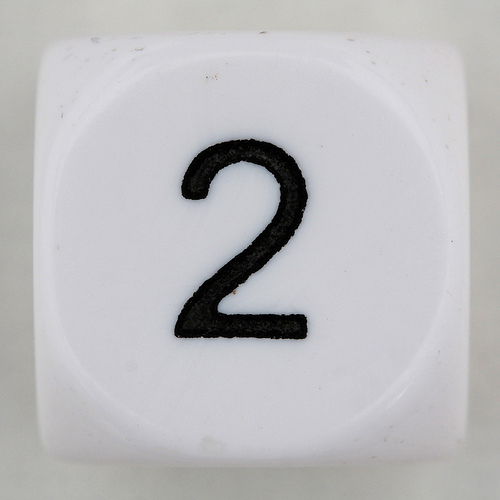 Saturday night in Washington and another Southeast Division matchup.  The Washington Capitals were looking to get back on a winning track after their 3-2 loss to Philadelphia at home on Thursday night.  Saturday’s opponent was the Tampa Bay Lightning, a team the Caps defeated in Tampa in early November by a 4-2 score.  Saturday was Tampa Bay’s first visit of the season to Washington.

The Caps proved to be inhospitable in the early going.  Washington opened the scoring a little over three minutes in when Nicklas Backstrom collected the puck that ricocheted off the end wall from an Alex Ovechkin shot and whipped it into the Lightning net before goalie Mathieu Garon could cover the near post after defending the Ovechkin shot.

The goal served as a wake-up call for the Lightning, who managed to put consistent pressure on the Caps in their own end.  Goalie Michal Neuvirth was sharp, though, twice turning away Steven Stamkos one timers and a point-blank drive from Teddy Purcell in the first ten minutes.  Neuvirth’s play allowed the Caps to get out of the first period with their one-goal lead intact.

The second period started with more even play, neither team able to sustain any territorial advantage or engineer scoring chances.  That changed when Ryan Malone was sent off for boarding at the 7:08 mark of the period.  The Capitals took advantage of the power play opportunity when Nicklas Backstrom won a faceoff to the right of Garon.  He pulled the puck back cleanly to Alex Ovechkin, who took a couple of strides to his right and sent a wrist shot over Garon’s glove to give the Caps a 2-0 lead.

Washington made it 3-0 later in the period off a Lightning turnover.  Defenseman Brian Lee tried to complete a stretch pass from his own goal line, but Nicklas Backstrom was jumping on for a line change as Lee released the puck.  Backstrom got in front of the pass at the Tampa Bay line, then found Troy Brouwer at Garon’s left with a pass.  Brouwer snapped the puck over Garon’s left pad at the 13:08 mark to give the Caps the three-goal lead.

Tampa Bay narrowed the gap late in the period.  Matt Carle gloved down a clearing attempt and walked down the blue line looking for a passing opportunity.  He sent the puck deep to Neuvirth’s left.  On its way through, the puck was deflected by Teddy Purcell through Neuvirth’s pads for his sixth goal of the season.  That would close out the scoring for the second period, the Caps holding a 3-1 lead after 40 minutes.

The third period opened with Tampa Bay renewing the pressure they were able to exert on the Caps early on.  The Caps complicated the problem when Mathieu Perreault was sent off for four minutes for high-sticking Benoit Pouliot.  The Caps killed off the first half of the double-minor penalty but could not wrap up the second half.  Stamkos recorded his 11th goal of the season when Martin St. Louis found him between two Caps defenders for a one-timer from the edge of the right wing circle.

Michal Neuvirth kept the Lightning from inflicting any more damage on the scoreboard, and the Caps took advantage of Neuvirth’s solid play at the 13:34 mark when Alex Ovechkin scored his second goal of the game and 14th of the season by ripping a wrist shot past Mathieu Garon’s blocker.  Nicklas Backstrom was credited with the primary assist, his third helper of the game and fourth point.

That might have ended the suspense as far as the outcome was concerned, but Dmitry Orlov was sent off for delay of game when he shot the puck off the rink with 2:57 left in regulation.  The Lightning would make it a 6-on-4 advantage when they pulled Garon for an extra attacker in the last 30 seconds of the power play.  Neuvirth was equal to the task, though, and kept the Lightning from finding the back of his net over those last 30 seconds of the power play.

The Lightning would get their goal just after the penalty expired, however.  The Caps were unable to clear the puck out of their own end, and as Orlov was trying to get into defensive position after serving his penalty, Vincent Lecavalier lifted a shot over Neuvirth’s glove to bring the visitors within a goal with 52 seconds left.

That was as close as the Lightning could get, though.  Washington skated off the last 52 seconds without allowing a Lightning shot on goal, and the Caps escaped with their 17th win of the season, 4-3. 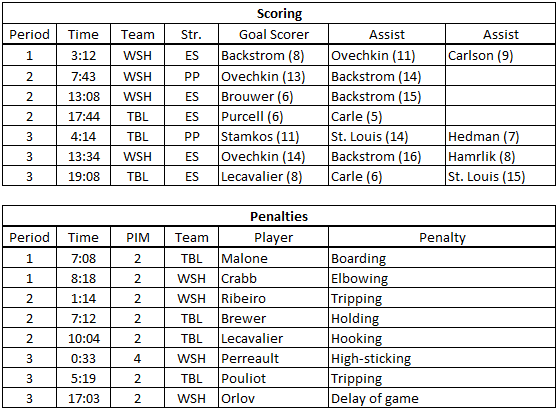 Posted by The Peerless at 8:33 AM No comments: