The Peerless Prognosticator is ON THE AIR!!! -- Caps vs. Canadiens, December 28th

It’s the week between Christmas and New Years when folks are basking in the holiday glow and… what the heck is THAT, cuz? 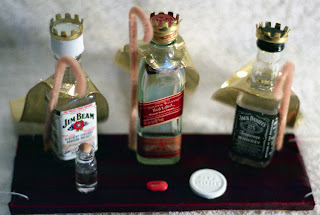 Well, this is the last game indoors before the Caps head outside on Saturday, and it marks the first time that the Caps have faced the Montreal Canadiens since the Habs ended the Caps season on Verizon Center ice in Game 7 of last season’s opening round of the Stanley Cup playoffs. Last spring the Caps managed to find the back of the net only three times on 134 shots in the last three games of the opening round playoff series against Montreal, and once more the Caps face a Canadiens team that can keep the puck out of the net. Only two teams have allowed fewer goals per game than have the Canadiens, and only one team has a more efficient penalty kill. The overall numbers look like this… 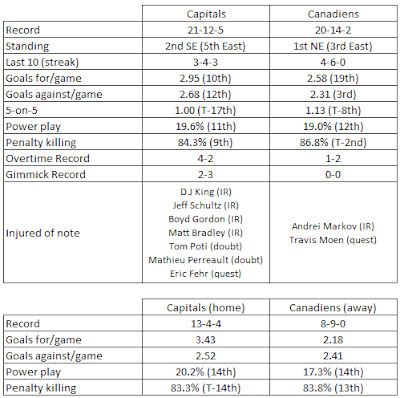 What the Caps will not face this time around is a goaltender wearing number “41.” Jaroslav Halak has taken his show to St. Louis, leaving the number one netminding chores to Carey Price. No goalie has more wins (going into last night’s play) than the 19 Price has. Among goalies having played in at least half of his team’s games, Price is fourth in goal against average (2.27) and fifth in save percentage (.923). He is also tied for third in shutouts with four. However, he’s hit a rough patch lately, going 2-5-0 in his last seven appearances (3.60 GAA, .870 save percentage). Why is he hitting this bump in the road? Well, as this article points out, Price is undertaking what for him is an unprecedented workload. Should he get the start tonight and finish the first period, he will hit the 2,000 minute mark. That would be the first time in his career he hit that minute mark this early in a season. Last season Price was 2-1-1 against the Caps, but his 3.39 goals against average and .899 save percentage suggest he can be solved.

The Canadiens have been enduring a problem Caps fans are familiar with over the last few weeks, an inability to put the puck in the net. Over the last eight games (2-6-0), Montreal scored a total of 18 goals (2.3/game), and only once – in a 4-3 win over Boston – did they record more than three. Like the Caps, the leading scorers haven’t been leading by scoring. Top point getter on the season Tomas Plekanec is 2-3-5 in the last eight games. Andrei Kostitsyn is 1-3-4. Brian Gionta is 3-0-3. Montreal has, however, gotten some reliable production from Michael Cammalleri and Scott Gomez lately. Cammalleri has points in ten of his last dozen games (5-7-12), while Gomez is 1-7-8 in his last six games.

On the back line the Canadiens will miss Andrei Markov, who is out for the season after undergoing surgery on his right knee. Montreal does not lack for veteran leadership back there, though. Roman Hamrlik, Jaroslav Spacek, and Hal Gill have more than 3,000 regular season games’ worth of experience among them (3,032 to be precise). That would seem to be sufficient to provide a measure of stability in front of Carey Price.

P.K. Subban is ranks highly among rookie defensemen as the season heads to its half-way point. Subban ranks fourth in total scoring, first in power play goals (his only two goals of the season), first in shots on goal, fifth in total ice time, first in hits, fifth in blocked shots, third in takeaways. He also ranks first in another stat – penalty minutes. Of the 15 minor penalties he has taken, ten of them are of the “obstruction” sort – interference (three), hooking (two), and tripping (five). It suggests that while talented, he can be pressured into making mistakes that he has to make up for by going outside the rules.

The last time these teams met, Semin was launching 14 shots at goalie Jaroslav Halak. Eight of them reached Halak. None got past him. In fact, Semin fired 95 shot attempts at the Montreal net in last spring’s first round playoff series. Forty-four of them made it to the Canadiens’ net. None of them crossed the goal line. He comes into this game on another cold streak. Semin has no goals in his last ten games (on 26 shots) and is 0-5-5, plus-1 overall over that span. He does, however, have an assist in each of his last two games. The Caps seem to have put their December disaster behind them, but Semin hasn’t yet come out of his drought.

3. Step Up. The Caps could have as many as seven players out of the lineup tonight. It is another opportunity for players such as Jay Beagle and Andrew Gordon to show coaches and management what they’ve got, a product of a deep and talented organization. Gordon doesn’t have a point in either game since notching his first NHL goal; Beagle doesn’t have one in either of his appearances since getting the game-winner against the Devils on December 21st.

In the end, these are two teams of similar records that have traveled different roads to get there. Washington, despite consciously trying to show it can play the close, low scoring game, remains an explosive offensive force. Montreal relies on defense and Carey Price for their success. Neither has had an especially memorable December – Montreal is 5-6-1 for the month, Washington is 4-6-3 and assured of having their first sub-.500 month under coach Bruce Boudreau.

This has the potential to be an aesthetically unappealing game, the sort that the Caps too often sleepwalk through. If they do that, Montreal will thank them and take their two points out of DC. We’re betting the Caps won’t, though, but you already knew that…