Just thought we would remind you that there is a second 2012 first round draft pick for the Caps out there (the one the Caps obtained from Colorado in exchange for Semyon Varlamov), and at the moment looks to be a pretty high one... 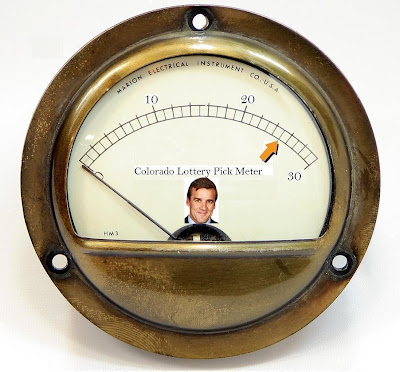 Still "Smilin' George."  The Avalanche are 2-3-0 in December (one win coming via a Gimmick), and they have lost their last three by a combined 13-3 margin.  Colorado has a tough schedule ahead -- home-and-home against San Jose, the Caps, the Flyers, and St. Louis in their next five.  They do get four of those five games at home, but it still won't be easy.  If Colorado stumbles, he might become "Laughin' George" soon.

Now, if we could only find a picture of McPhee actually laughing...
Posted by The Peerless at 11:15 AM No comments:

Week 9 might be looked back upon as “Turning Point” when the season’s history is completed. One could certainly feel more confident by week’s end about the Caps being the team we’ve come to know and love (at least until the spring) over the past few years, at least as far as winning goes.  Style?  That might be a different matter.

Last week was another instance of not being how you start, but being how you finish. That could apply to games (we will get to that) and to the week in general. After a 1-2-0 week, the 2-1-0 week brought new coach Dale Hunter to “even” in his short tenure behind the bench, reaching .500 at 3-3-0. It was the first “winning” week since Week 4, when the Caps went 2-1-0.

It was a good week for the Caps on the offensive side of the ledger, especially considering that they scored 11 goals in the last seven periods of hockey for the week. They were especially adept – this week at least – in finishing strong. They recorded seven third period goals in the three games and now have the seventh highest total of third period goals in the league this season (31 in 28 games). The Caps spread things around quite nicely, too. Ten different Caps scored goals in the three games, three of them with two apiece (Brooks Laich, Dennis Wideman, and Nicklas Backstrom). Fifteen different Caps had points, defenseman John Carlson winning the week with seven points (1-6-7). For Carlson, it meant finishing the week in a tie for sixth in scoring among defensemen. He is 3-10-13 in his last 11 games.

Two weeks ago, the Caps were awful. Last week, they were better. This week, they were…well, we are not exactly sure what. “Awful” would be an apt description as they opened the week, allowing the Florida Panthers to launch 24 shots on goal and all five goals in the first two periods of a 5-4 loss. But after that, opponents managed only 68 shots on goal and five goals in seven periods to close the week. They allowed only two third period goals for the week (only one at even-strength), and perhaps most encouraging, did not lose a lead in the third period once they had one. Here is something to think about. If you consider the “shut-down” quintet as being the line of Joel Ward, Brooks Laich, and Jason Chimera; and the shutdown defensive pair as being John Carlson and Kark Alzner, they skated together for 32 shifts for the week (source: timeonice.com). At no time were they on ice for any goals against as a group.

The numbers look worse for what happened early in the week. Michal Neuvirth allowed five goals on the first 20 shots he faced in a 5-4 loss to Florida on Monday. But with Neuvirth stopping the last ten shots he faced in that game, and Tomas Vokoun stopping 57 of 62 shots he faced in the two Caps’ wins for the week, the goaltenders finished up 67-for-72 (.931 save percentage). Still, Neuvirth’s performance is troubling. He has yet to allow three or fewer goals in consecutive appearances this season, he has stopped 90 percent of more of the shots he faced in only three of ten appearances, and he has allowed 27 goals on 194 shots in seven appearances since stopping 24 of 25 shots in a 5-1 win over Carolina on November 4th. For whatever reason, he is not adapting well to being the backup and is not performing well enough to be considered the number 1 or even the “1A” netminder.

Another case of slow start, strong finish. The Caps opened the week coming up short on two power plays against Florida. Then they came up empty on their first two power plays against the Ottawa Senators, including 1:47 of a two-man advantage. But they recorded one goal on their final two man advantages in that game, then went 4-for-6 against Toronto to end the week (returning the favor bestowed upon them by the Maple Leafs when Toronto was 3-for-5 against Washington in the first meeting of the clubs on November 19th). The Caps scored their four power play goals in those last two games on 19 shots, a 26.3 percent shooting percentage. Going five for their last eight chances for the week allowed the Caps to jump 11 places in the league power play rankings from the previous week.

The penalty kill went hand-in-glove with the power play. It started the week allowing power play goals to Florida on three of its first five power plays (five power plays in barely 22 minutes itself being a problem). But the Caps closed the week killing off eight of nine shorthanded situations. They improved on shots allowed as the week unfolded, allowing ten (three goals) to Florida, nine to Ottawa (one goal), and only two shots on goal to Toronto (both by defensemen) to end the week. The lingering question, though, is whether that game against Florida was a blip on the radar, or a symptom of inconsistency. The three goals allowed were the only time in the past ten games in which the Caps allowed more than one power play goal. In the other nine games the Caps were 25-for-27 (92.3 percent).

It was not a big week in either hits or blocked shots for the Caps. If there was anything noteworthy about the hits recorded, it was their coming from unexpected quarters. Dennis Wideman (six), Mathieu Perreault (four), and Marcus Johansson (four) accounted for almost a third of the total for the week. Of course, there were the usual suspects – Troy Brouwer and Alex Ovechkin – with six apiece. These five players accounted for 26 of the 48 hits on the week’s ledger. On blocked shots, it was not a big week, but the players one would expect to be at the top of the heap were there. As a group, the defense had 22 of the 39 for the week. And looking at the “shutdown five,” Carlson, Alzner, Laich, Chimera, and Ward combined for 17 on their own.

The Caps won the week, and just as it was largely the product of one game the previous week, it was largely due to winning 41 of 72 draws (56.9 percent) against Ottawa in a 5-3 win. The spread for the week by zone did not indicate any sense of territorial dominance for either the Caps or opponents – 63 total offensive zone draws, 60 in the defensive zone, and 67 in the neutral zone. However, the Caps did have a good week in the offensive zone, winning 36 of those 63 draws (57.1 percent). Brooks Laich had an especially good week, winning the majority of his draws in all three games and going 31-for-48 overall (64.6 percent), including 10 for 12 in the offensive zone.

The Caps might have beaten the Toronto Maple Leafs, 4-2, in the last game of the week, but the four goals – all on the power play – masked an effort in which they had 25 turnovers (Maple Leaf takeaways plus their own giveaways) to 14 turnovers for Toronto. Seven of the 12 giveaways in that game came from defensemen. In fact, 11 of the 23 giveaways for the week came from blueliners (four of them from John Carlson). Of the 22 takeaways for the week, the line of Chimera-Laich-Ward had ten of them.

The Capitals might have turned a corner just in time. The Caps host the Eastern Conference-leading Flyers on Tuesday, then head west to face the pesky Winnipeg Jets (a loss and an overtime win for Washington) on Thursday and Colorado on Saturday. But for this past week, the fact of the matter is that the Caps faced three teams that were ahead of them in the standings at the time the games were played. Moreover, they played teams playing fairly well. Florida was 8-4-1 in games leading up to their meeting with the Caps and had to hold on for dear life at the end to escape with a win. Ottawa was 6-2-2 leading up to their game with the Caps, and Toronto was 5-3-1, starting with their 7-1 win over the Caps on November 19th.

What came out the week might be an indication of the kind of team fans will see under the new coach. It might not be as effervescent as it was for much of Bruce Boudreau's tenure here, but will be effective. It might not pounce on teams early and often, but it might squeeze the life out of them (as outscoring them, 7-2, in third periods this week might indicate). This might finally be the “playoff-ready” style the Caps will need down the road. Although at the moment, the operative word in that statement is “might.” We might have a better picture come this time next week.