The Peerless Prognosticator is ON THE AIR!!! -- Game 74: Capitals at Flyers, March 22nd

End of the road…for now.

The Washington Capitals bring their five-game road trip to an end on Thursday when they visit scenic south Philadelphia and the WellsFargoWachoviaFirstUnionCoreStatesCenter to take on the Flyers. From their start in Washington to Long Island on March 13th and 2,921 miles of travel among the cities they visited, the Caps are probably happy to be in Philadelphia because…

“Is there any other kind in Philly?”

I guess you’re a hockey fan, too…

“Hate ‘em…orange is a bad color, dude. Can I tell ya somethin’?”

Really, well, what advice would you give them against the Flyers?

Actually, I think it was because you can’t find a decent cheesesteak in Winnipeg.

Local cuisine aside, the Caps will be looking to do a little feasting on the Flyers after their solid win in Detroit on Monday. The team they will be facing is one that has all the classic symptoms of a change in momentum. The Flyers started off the month of March in fine fashion, winning seven of eight and climbing to within striking distance of the top spot in the Atlantic Division and the Eastern Conference. On March 15th they had a record of 41-22-7 and were just six points behind the New York Rangers and two behind the Pittsburgh Penguins.

Streaks are just that, though. They do not last forever, and one can often see the end coming before it actually arrives. For the Flyers, the wheels started to wobble a bit when after posting a pair of shutouts to extend a winning streak to five games, they came up short in a 4-1 loss in New Jersey. They rebounded by shutting out the Devils two nights later by a 3-0 score, but then they struggled to beat the lowly New York Islanders, 3-2, then lost in Boston to the Bruins in a Gimmick.

On Sunday, Philadelphia and Pittsburgh played in one of the more entertaining games of the season with the Flyers winning with less than one second left in overtime on a goal by Scott Hartnell. It might have taken a bit out of the Flyers, though, as they lost to the Florida Panthers on Tuesday, 2-1, to leave them 1-1-1 in their last three games coming into this one. Here is how the teams stack up against one another: 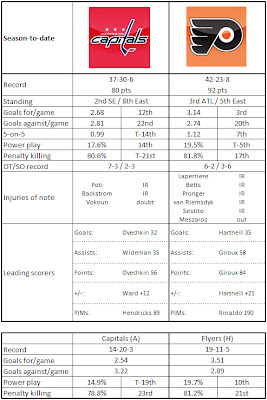 1. Ilya Bryzgalov is finally earning that big paycheck. The recipient of a nine-year, $51 million contract in the off-season as a free agent, Bryzgalov has been the workhorse in goal as the Flyers hit the top of the stretch. He has appeared in 15 of the Flyers’ last 16 games, and in them he has a record of 11-3-1, 1.82, .933, with four shutouts, three of them coming in consecutive appearances in mid-March, the other one coming at the expense of the Caps on March 4th. He has allowed more than two goals in only one of ten appearances this month.

2. The Flyers score a lot in the friendly confines of WellsFargoWachoviaFirstUnionCoreStatesCenter. More goals at home than all but two teams in the NHL, in fact (Detroit and Chicago). But they also allow a lot of goals at home, too, being one of eight teams having allowed at least 100 goals on home ice this season. Of those eight teams, only Philadelphia and Ottawa are currently playoff-eligible.

4. Philadelphia has taken 341 minor penalties in 73 games, a whopping 37 more than either Montreal or Dallas (before Wednesday night’s games) – a total more than 12 percent greater than those other two teams. Only two teams have faced more shorthanded situations at home than the Flyers’ total of 138 (3.94 per game), which goes with their having allowed more home power play goals (26) than only two teams.

5. More on penalties...The Flyers have a long, hard-earned tradition of playing past the edge of the rule book. This year’s edition is no exception. The Flyers have a total of 417 penalties this season, almost six a game. That total is 43 more than the second-place club (Ottawa). Further, that gap between first and second is the largest between any other rank and its next in line in the league (Ottawa has 18 more than third-place St. Louis).

1. The Caps have won five of their last seven games. It is their most sustained run of success since going 7-2-0 over a nine-game stretch from December 28th through January 15th.

3. Joel Ward has taken over the team lead in plus-minus (plus-12). He has gone 17 consecutive games without being on the minus-side of the ledger and only once in his last 28 games. On the other hand, the Caps have five players who are a minus-10 or worse. Over the previous four seasons, of all the players having played the entire season with the Caps, only three players recorded minus-10 seasons or worse: Jason Chimera (minus-10 last season), Alexander Semin (minus-18 in 2007-2008), and Michael Nylander (minus-19 in 2007-2008).

5. Of the eight teams currently playoff eligible in the Eastern Conference, only one has fewer wins by three or more goals than the Caps (10) – Florida (7).

With Alex Ovechkin ramping up his production lately (six goals in his last seven games), defenseman Kimmo Timonen could be a key in how this game unfolds. Timonen has often drawn the assignment of matching up against Ovechkin in these Caps-Flyers contests. His success in that regard – and that of his teammates – has been mixed. Ovechkin is 13-8-21 in 17 games against the Flyers since Timonen joined the club in the 2007-2008 season. But Timonen does bring some other tools to the job. He is 2-17-19 in 26 career games against the Caps and has 11 power play assists against Washington in those games.

Seems the lion in winter still has a roar. Mike Knuble is 3-1-4 in his last four games. There is also this odd fact about his goal scoring this season. Of his six goals, five of them have come against teams currently playoff eligible (Detroit, Chicago, Florida, Vancouver, and Pittsburgh). His last one came against a team for which he played once upon a time, and it would be a boost for him to repeat the deed against the Flyers. He has a 4-6-10 scoring line against Philadelphia in his career.

1. Quiet Please! There is a saying that the fans are the “seventh man” of a hockey team. That is perhaps true in only a few places. Philadelphia is one of them. That means that the Caps can’t stub their toe early and let the Flyers get off fast. It is not so important for the Caps to get out quickly as it is that the Flyers don’t. If they do, the fans will be like sharks in the water smelling blood, and the Flyers could feed off that and make things hard for the Caps.

2. Volume, volume, volume… When he lost to Florida on Tuesday, Flyer goalie Ilya Bryzgalov saw a nine-game streak without a loss in regulation end. In those last ten games he has faced only 275 shots. Twice he faced fewer than 20. Don’t make things easier for him than they already are. Get in his face.

3. Don’t use a Lamborghini to haul mulch. Cute won’t do it in Philly. The Flyers play with an edge, and the Caps will have to stand up to it. They’ll need to bring their pick-up trucks, not their sports cars, and grind out a win.

In the end, the five-game road trip comes down to this. Win, and it is successful. Lose, and it is not. That stark judgment is made clearer by the fact that the Caps now hold eighth place in the East only by virtue of a tie-breaker with Buffalo (regulation plus overtime wins). The Caps cannot lose that advantage if they lose this game, but winning will put more pressure on the Sabres, who play two of their next three games on the road (one in Washington).

Games like this are like playoff games, but with more dimensions. In a playoff game, you have only the team you face on the ice to worry about. You do not have to concern yourself with other series. But a game like this, against a long-hated opponent that you might see down the road, is played in the context of all the possible outcomes of teams and games around you that influence whether you make the playoffs at all. It means this game should have the Caps full and undivided attention.