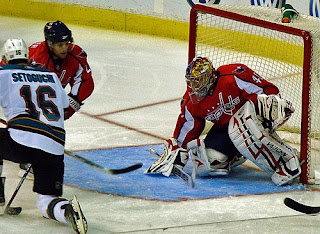 As Philadelphia and Chicago do battle to see who will end the 2009-2010 season as Stanley Cup Champion, we will take a look back at ten games of this season that mattered to the Capitals. As we have done before, we will look at some wins, look at some losses, and look at what might be taken away from them. They are in no particular order except chronological, which means we start with…

On this night, both teams found themselves having stumbled out of the gate and each with something to prove early. For the Sharks, the issue was turning over about half of their roster from that which took the ice in the last playoff game of 2009. For the Caps, the issue was the opportunity to face down a strong Western Conference team. San Jose posed a special problem for the Caps in two respects. First, the Caps hadn’t beaten the Sharks since February 20, 1999, going 0-11-1 in the 12 games since and getting outscored by 44-22. Second, goalie Evgeni Nabokov came into the game with a record of 8-0-0 against the Caps since the 2000-2001 season (1.98, .935) and recorded his first shutout of the season in his previous outing against the Phoenix Coyotes.

Why it mattered: After the Caps soundly defeated the Boston Bruins on opening night, they looked less formidable in beating the Toronto Maple Leafs in their next outing, then lost four in a row (0-2-2) leading up to this contest. On top of that, leading scorer Alex Ovechkin had not scored a goal in his previous three games after going 5-4-9, plus-5 in his first three games to open the season.

This game would be highlighted by the installation of right wing Mike Knuble – a free-agent pick up in July – with Ovechkin. The odd part of this was that they would be centered, not by Nicklas Backstrom, but by another free-agent pick up over the summer, Brendan Morrison. The recombination of forwards worked. Ovechkin scored two goals 28 seconds apart in the second period to give the Caps a lead they would not relinquish, Knuble getting both primary assists and Morrison getting both secondary assists. The first of these goals would close the register on NHL clubs Ovechkin scored a goal against, San Jose being the last blank line in that book. The Ovechkin-Morrison-Knuble line finished the night 2-4-6, plus-6, and Ovechkin had 13 shots on goal for the night.

It wasn’t just a case of rejuvenated offense, either. At the other end, the Caps allowed only 15 shots in the last 41:42 of the game, all of which were stopped by goalie Semyon Varlamov, who came on in relief of starter Jose Theodore, who left the game after the first period with back spasms. It was a particularly satisfying night in terms of Varlamov’s performance in that the 40 minutes of spotless goaltending came on the heels of two lesser performances – a four goals allowed effort (on 31 shots) against Toronto in a 6-4 win and another four goals allowed effort (on 25 shots) in getting a no-decision in 33:59 of a 6-5 overtime loss to the Philadelphia Flyers.

The Takeaway: The Caps would use this game as a springboard for a run that saw them win six in a row and earn standings points in eight straight games. Beginning with this game, Varlamov would go 11-1-2, 1.88, .929, and two shutouts before leaving the lineup with a groin injury in early December. And beginning with this game, Ovechkin would close the 2009 portion of the season 21-17-38, plus-12, in 26 games. On a higher level, it demonstrated an ability to play with the Western Conference big boys, an important consideration given that the Caps already had a 3-2 loss in Detroit on their early-season record. The win over San Jose would start a 4-0-1 run against Western Conference teams. They would not lose again to a Western Conference team in regulation at home until dropping a 5-3 decision to the Calgary Flames on March 28th.
Posted by The Peerless at 6:15 AM No comments: