The Peerless Prognosticator Brings You... The Eastern Conference Quarterfinals

Having posted the prognosto on the first round series between the Washington Capitals and the Toronto Maple Leafs, what lies in store for the other three Eastern Conference Quarterfinal series? We have an Original Six matchup, an Atlantic affair, and a neighbors-who-hate-one-another contest. And this is just the first round.

Two teams with more than 1,200 Stanley Cup playoff games between them, this will be the 16th time in their respective histories that the Montreal Canadiens and New York Rangers meet in the postseason. The Rangers hold an 8-7 lead in all-time series, the difference being their 4-2 win in games in the 2014 Eastern Conference finals. This season, the Canadiens swept the three-game season series. 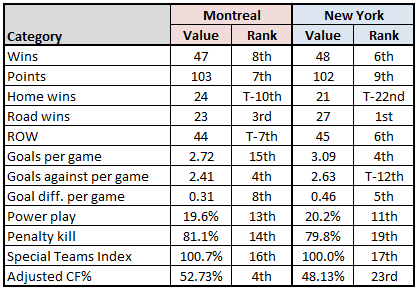 Canadiens: In the last ten games of the season, Montreal faced one playoff-eligible team (a 3-1 win over the Ottawa Senators).  They were 6-2-2 in those ten games, but it doesn’t seem as impressive as it looks, given the quality of competition.  Nevertheless, they did hold eight of the ten opponents to two or fewer goals.  On the other hand, two of those efforts were authored by Charlie Lindgren in his only two appearances this season for the Habs.  Carey Price had another Vezina-finalist quality season (37-20-5, 2.23, .923, with three shutouts), and given that the Canadiens finished just 15th in scoring offense (seventh among the eight teams in the Eastern half of the playoff bracket), he’s going to have to keep up that level of performance.  His job is made harder with a series of injuries to defensemen that have them on a day-to-day watch, including Shea Weber.

Rangers: New York could test Price in goal.  The third-best scoring offense among the Eastern Conference playoff teams, they did stumble a bit down the stretch, averaging 2.67 goals per game over their last 15 contests (more than a third of a goal per game under their season average).  It is a team that struggled over the last 15 games, going 5-6-4 and failing to win consecutive games at any point along the way.  Their problem is that they are a comparatively poor possession team, especially when compared to the Canadiens.  In that sense, the pressure will lie in a similar spot to that of Montreal – their goaltender.  Henrik Lundqvist is not coming into the postseason on a hot streak.  In his last eight appearances he is 2-4-2, 3.35, .898.

In the end… This is likely to be a close series, but not one of aesthetic grandeur.  If Montreal was in full health on the back line for this series, we’d say a combination of Montreal’s better possession numbers and Lundqvist’s recent off-play would make for a six-game series.  But given the uncertainty on the Canadiens’ back end in terms of health, we’re thinking…

The Ottawa Senators and Boston Bruins do not have nearly as much history as do the Canadiens and Rangers.  In fact, this will be the first postseason meeting between the clubs.  The Senators are making an appearance in the postseason after sitting out last season’s dance, while the Bruins are appearing in the playoffs after spending the last two seasons on the sidelines.  The Senators swept the four-game season series. 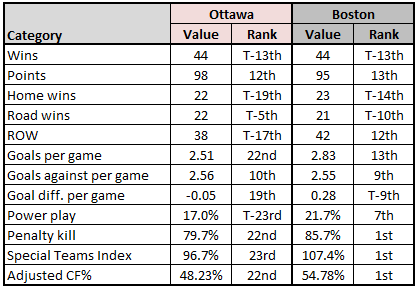 Senators: The Senators can be considered overachievers, if you look at their ranking in individual statistical categories.  They have a lot of rankings in the 20’s, yet they finished with 44 wins and tied for fifth in wins on the road.  Ottawa does not have a 30-goal scorer and have only Erik Karlsson with more than 65 points.  Worse, they have just four games in their last 15 contests in which they scored more than two goals and only once more than three.  Pair that with having allowed four or more goals four of their last seven games to close the regular season, and this is not a club on a pace to reach the second round.  Craig Anderson had a fine year in the face of considerable personal issues he and his wife had to deal with, and he closed the regular season with a 0.65 goals against average and a .972 save percentage with one shutout in his last three appearances to close the regular season.  But it is hard to think he could maintain that level of play, or even raise his game to another level over a seven-game series, given the shortcomings with which the club was negotiating over the final stretch of the season.

Bruins: Best possession team in the league, best combined special teams.  So why did they finish back in the pack?  Because frankly, they don’t have a lot of depth in terms of skill.  Brad Marchand (39 goals) and David Pastrnak (34) can fill the net, but things drop off quickly and by quite a bit after that.  Boston is a team that uses possession, not to place their skilled pieces on the chessboard to get them into the best places to score, but to grind out wins in a workmanlike fashion.  They would be most successful when they are most boring (Marchand’s proclivities for hijinks outside the rules notwithstanding).  It leaves a rather thin margin for goalie Tuukka Rask, who despite a 1.65 goals against average, .936 save percentage, and five shutouts over 34 playoff games the last two seasons, has a win-loss record of 21-13.  It’s a record that could be better with more support

In the end…  Ottawa was once a team that would try to skate opponents into the ground with speed and skill.  This team is not that one.  They will try to annoy opponents to death.  Boston, on the other hand, “plays” the game better than their results would indicate.  It could make for a uniquely unappealing series to watch, except for purists.  The Bruins are just better in more categories that matter...

A series of a team with a winning tradition in recent years against one trying to find that formula.  The Pttsburgh Penguins and Columbus Blue Jackets present a stark contrast in style.  The Penguins are a skilled team with two of the best, of not the best centers on the planet.  On the other side, the Blue Jackets are more egalitarian in terms of the distribution of skill and rely on a hard work ethic to generate success.  Both teams were 2-1-1 in the season series.  Chalk one up for extra-time hockey. 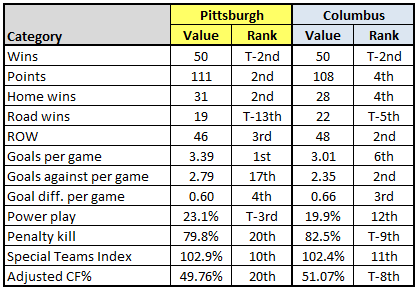 Penguins: It is possible that no team has done more with less in terms of health in the modern era of hockey than this year’s version of the Penguins.  They managed second in the league in wins and points despite injuries over the course of the year that left them with one player finishing the season playing all 82 games (Phil Kessel).  They had just six players finish with 75 games played and only 10 regulars missing fewer than 20 games.  It made for an odd year of reversals in which Sidney Crosby, the planet’s best playmaker, led the team and the league in goals (44), while Phil Kessel, usually thought of more as a finisher, led the team in assists (47).  Crosby tends to dwarf anyone around him in terms of attention, and the injuries were a continuing drama.  That made it easier for Matt Murray to hide a very nice season in goal (fifth in save percentage, 11th in goals against average among 35 goalies with at least 2,000 minutes played; four shutouts).

Blue Jackets: A “jack-of-all-trades” is said to be one who does a lot of things well, none of them in an extraordinary fashion.  Often it is a bit of an insult.  It could be used to describe the Blue Jackets, and not as an insult.  They did falter at the end of the regular season (3-6-2 in their last 11 games), but they still finished in the upper half of the rankings in every meaningful statistical category and top-ten in many of them (scoring offense and defense, penalty kill, adjusted Corsi-for percentage). Columbus had 12 players with ten or more goals, 14 with 20 or more points.  They had four players with 20 or more power play points.  “Balance” is their strong point on offense.  On the back end, Sergei Bobrovsky is a lock to be a Vezina Trophy finalist, if not the outright favorite to win it.  Only 12 games in 59 in which he recorded at least 50 minutes of ice time this season did he have a save percentage under .900.  At the other end, he had 16 such games in which he had a save percentage of .970 or better.  What he needs, though is playoff success.  In his sparse postseason experience to date (13 games), he is 2-6-0, 3.49, .890.

In the end… This might be the most competitive of the four opening round series in the East.  And, it will be a battle of the irresistible force in the Penguins meeting the immovable object in the form of the Blue Jackets.  Timing would seem to favor Columbus in this series.  Yes, they enter the playoffs in a slump, but over the course of the season were a better possession team than the Penguins and put together long stretches of top-end play.  Pittsburgh could get some of their wounded back, but they might not be in as playoff-ready shape as they would hope.  They compound this with being a sub-par possession club.  If they escape the Blue Jackets, it could make things difficult for their opponents down the road.  Unfortunately for them, however, that road ends in Pittsburgh in a deciding game…

Columbus in 7.
Posted by The Peerless at 1:59 PM No comments: