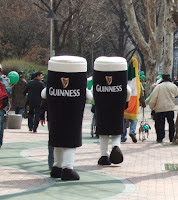 We’re long past the how…it only matters how many. And two points – no matter how ugly a manner obtained – is the object of the exercise.

The Caps picked up a hard-earned two points this afternoon against the Boston Bruins in a 2-1 shootout win.

The Bruins tried to rope-a-dope the Caps into an afternoon nap of a game, and it almost worked, the Bruins launching shot after shot at Caps goalie Cristobal Huet, and the Caps doing their part by trying—and failing, for the most part – to dent the four-wide defense the Bruins sought to employ to keep the Caps from gaining the Boston zone with any momentum.

In the end, though, it was a Russian twist on a St. Patrick’s Day weekend as Sergei Fedeorov netted the only regulation goal, and Alexander Semin and Viktor Kozlov potted goals in the shootout to earn the extra point. Who’d think that in a game where Russians were the only ones to rustle the twine, the one that would be absent from the party would be Alexander “Still on 99” Ovechkin.

Fedorov, who ended the game with more ice time than in any previous game in his short stint with the Caps (22:48) had another in a string of solid games. The goal was nice, but even without it (in which case, the Caps lose, of course), he was for the most part solid. Four shots on goal and 12 faceoff wins in 21 chances. For those of you keeping score, Fedorov has won 95 of 150 draws – 63.3 percent – since coming over from . If a club is going to play a possession game, it helps to start plays with the puck.

If there was a number that was cause for concern, it was this one – 21. That was the number of giveaways the Caps had ( had eight). And it was a group effort – 12 Caps (including Huet) had giveaways. Oddly enough, the player you might expect to have a couple – Alex Ovechkin (tied for third most in the league) – had none.

If you’re looking for a “grind your teeth into a fine powder” frustrating effort, you’d have to look to the side of the ledger. Three times this year, Marc Savard registered six shots on goal. In each of them he registered at least a point. Today, Savard had eight shots in 21:44 of ice time and had two others blocked. His return on that investment in effort?...nada, zilch, the big zero. No goals, no assists, no points. At least Chuck Kobasew netted a goal for his six shots worth of effort.

The runner up for frustration, though, might be Ovechkin, who had six attempts blocked (yet another example of ’s “get in the way” defense).

If you’re not aware of what time of year it is, spend a couple of minutes looking at the time-on-ice chart. Note the shifts by period…

None saw the ice in overtime. The bench got a might shorter, one might say, as the game wore on. Not surprising, considering the stakes.

OK…now what was that UFB* in the third period?! Alex Ovechkin is skating into the Bruin zone, trying to split two defenders, and is taken down when Mark Stuart hooks his shins, and Ovechkin is called for diving? Uh, sorry, no. That qualified as among the dumber calls one will see this year, and one is at a loss to understand the rationale for it. Maybe for an instant the referee saw an “8” and thought “Alexander Semin,” who has from time to time been accused of sharpening his thespian skills in pursuit of the two-minute call.

So now it starts…six games on the road against teams with a combined record of 204-192-44. Three of the teams – , , and – are either fighting to hold or fighting to gain playoff spots. The others all have records better than .500 at home. Four teams are fighting for that eighth playoff spot, two points separating them. In what is perhaps an odd scheduling quirk, only and play one another over the last stretch of games. None of the four play any of the other four teams between now and the end of the regular season. That will make for some intense scoreboard watching between now and April 6th, when the Flyers play the Penguins on the season’s last day.

Posted by The Peerless at 10:36 PM No comments:

Coming to the Game?...Thinking of Driving?

Tomorrow is the annual St. Patrick's Day Parade in D.C., and parking will be next to impossible to come by. And, there are street closings to deal with, too. From the Metropolitan Police Department:

The Metropolitan Police Department wishes to advise the public that the St. Patrick Day’s Parade is scheduled to be held on Sunday, March 16, 2008. In order to facilitate this event, no parking will be allowed on the following streets between the 5 am and 3 pm on the day of the parade.

The above listed streets will also be closed beginning at approximately 11 am until the completion of the parade. In addition , between and will be closed at approximately 7 am for parade assembly. Motorists should be alerted to these restrictions and expect possible traffic delays while traveling in the area of this event.

So, if Metro is an option for you, you might wish to take it, although work on the lines will add to travel times.


Posted by The Peerless at 1:33 AM No comments:

The Peerless Prognosticator is ON THE AIR!!! -- Caps vs. Bruins, March 16th

Well, it’s getaway day -- the last game before a six-game road-trip, and the Caps are hosting the Boston Bruins, the third game between these non-divisional rivals in the past 13 days. This will be the rubber game of the match, the Caps slapping the Bruins all over the ice for a 10-2 win, then giving a game away in the last five minutes in a 2-1 loss in …

“Uh, did you know that it’s a little known fact…the Bruins were originally dressed in black and yellow for the colors of a store?” 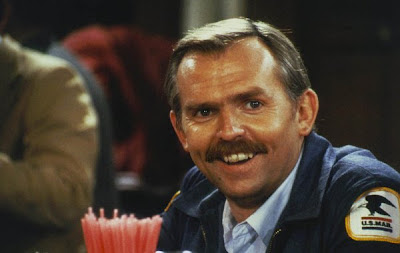 Cliffy!...you came all the way down from for the game?

“Yeah…I thought I needed a vacation, and noting says ‘relax’ like hockey.”

Never thought of it that way, but about the Bruins and those jerseys...a store?

“Yeah…the owner, Charles Adams, wanted his team to wear the colors of the grocery stores he owned.”

“No, no, not at all…and wanted a mascot that suggested strength and power.”

So they setlled on “Bruins”…

“Well, no one thought about ‘Ovechkins’ yet.”

Good one…speaking of Bruin history, what about the Kraut Line? How did that come about?

“Well, it’s a little known fact that The Kraut Line was an eatery in that served Irish fare. And the day before St. Patrick’s Day – I think it was in 1941 – the power went out, and all the food spoiled. So when the patrons arrived the next day for a steaming order of corned beef and cabbage, the cabbage had gone sour, and the line of customers out the door would forever more be referred to as the, uh…’Kraut Line.’”

Uh Cliff?...I thought The Kraut Line was the Bruin line of Milt Schmidt, Bobby Bauer and Woody Dumart…that they actually got the name when they played together in Providence.

“Well, yeah…that would be the other ‘Kraut Line.’”

What about this team, Cliff…think they can hold on to a playoff spot?

“Oh, yeah…why, it’s a little known fact that when the Bruins have at least a three-point lead on the team just out of the playoffs going into the last ten games of the year, they have never lost that lead.”

You’re just making this up as you go along, aren’t you?

Not too smart there, eh, Cliffy?

“Well, Here's a little known fact…The smartest animal is the pig. No, I'm telling you, your average oinker, yeah, yeah, yeah, scientists say; if a pig had thumbs and a language it could be trained to do simple manual labor.”

Hopefully, it won’t come to pigs…uh, referees deciding this in the manner that last Saturday’s game was decided. The Bruins could use the help, though. That 2-1 gift was the only game they’ve won in regulation in the last eight games (2-4-2, the other win coming yesterday in overtime against the Flyers).

Since taking it in the teeth against the Caps to start this eight-game slide, Boston is struggling mightily on offense – 11 goals, three of them yesterday (let’s hope that’s not a sign of breaking out). They’ve been shutout twice. No Bruin has more than two goals (Chuck Kobasew, Dennis Wideman, Marco Sturm), no Bruin has more than four points (Marc Savard, Sturm, Wideman).

Special teams have been special…in ways not to the liking of Bruin fans. The lack of productivity on the power play (3-for 37 – 8.1 percent) is matched only by the ineptitude of the penalty killers (22-for-34 – 64.7 percent).

It gets worse…Zdeno Chara, who might be expected to shadow (and we do mean, “shadow”) Alex Ovechkin whenever possible, did not make the trip with the team and will miss his fifth straight game.

A lot will depend on Tim Thomas in goal for the Bruins…if he gets the start. He played almost 62 minutes in the Bruins’ 3-2 overtime win yesterday, stopping 24 of 26 shots. His success against the Caps has been considerable – 8-1-1, 2.42, .922. But that one loss was a doozy, coming in the last game against the Caps…the one where he was pulled – twice – and gave up seven goals on 24 shots in 36:30 of total playing time.

This game all of a sudden looks like the game Friday night – a wounded, weakened opponent coming to town, struggling at both ends of the rink. Difference is, the Bruins are still fighting for a playoff spot, and that makes them dangerous.

A wounded bear…dangerous. Maybe was onto something.

The Caps don’t lack for motivation. A win draws them to within four points of fo seventh in the East, perhaps two of (if they lose to Pittsburgh in regulation) for eighth. They could find themselves within three points of with two games yet to play against the Hurricanes. The ramifications of a single game multiply quickly at this time of year, so it’s a “take care of business” game for the Caps before they board the flight for …

Posted by The Peerless at 1:16 AM No comments: