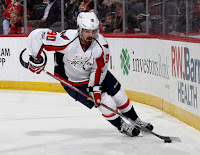 “Next to excellence is the appreciation of it.”
-- William Makepeace Thackeray

Over the last five seasons for the Washington Capitals, Marcus Johansson was a model of quiet consistency.  In 340 games (he missed just 24 games over those five years) he averaged between 0.55 and 0.65 points per season.  It might not sound like an elite number, but Johansson is one of 63 players (among 973 forwards to dress over that period) to record at least 0.55 points per game five times in five seasons.  And, he might be the least recognized name on that list.

All of that was prelude to a career season for Johansson in 2016-2017.  Playing in all 82 games for the second time in his seven-year career, he set career highs in goals (24), points (58), plus-minus (plus-25), even strength goals (19), and shooting percentage (18.6 percent).  And when he finished the season, he did so as one of the most accomplished players in the league in avoiding trips to the penalty box.  He and Ryan O’Reilly are the only two players in the league to finish the 2016-2017 season having appeared in more than 400 games over that span and record fewer than 60 penalty minutes.  O’Reilly has 48 minutes in 415 games, Johansson has 52 minutes in 432 games.  Johansson recorded just ten minutes in penalties this season.  In the five games in which he recorded a penalty, the Caps were 4-0-1.

Looping back to that shooting percentage for a moment, when Johansson recorded that 18.6 percent mark in 2016-2017, he became one of 10 players over the past six seasons to appear in at least 400 games and record a 14 percent cumulative shooting percentage or better.  Again, his might be the least recognized name on that list.

Johansson put together his 2016-2017 season in a bit of an odd way, one that was characterized by a strong start and a strong finish with a bit of a drought in the middle.  In his first and last ten-game splits (the last one being 12 games), Johansson recorded more than ten points in each.  It was a case of putting together a fair number of multi-point games, four in his first ten games of the season, three in his last 12 contests.

In between, he still had 34 points in 60 games, at 0.57 points per game, right in that 0.55-0.60 points per game sweet spot he recorded in his five previous seasons.  What those six ten-game splits featured were goals in each of them, giving Johansson at least one goal in each of his ten ten-game splits this season, a goal-scoring season of the sort he had not displayed in any of his previous six years with the Caps. 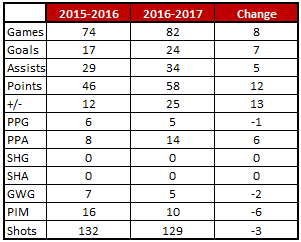 Fearless’ Take… One other career high showed up on Marcus Johansson’s 2016-2017 resume.  His 53.19 Corsi-for at 5-on-5 was his best in seven seasons in the NHL.  Of 14 forward combinations skating at least 50 5-on-5 minutes for the Caps this season, Johansson was on the top two combinations, his skating with Nicklas Backstrom and Andre Burakovsky over 61 minutes posting a 62.75 Corsi-for percentage, and his skating with Backstrom and Justin Williams over 65 minutes posting a 59.26 Corsi-for percentage (numbers from Corsica.hockey)

Odd Johansson Fact… Five of Johansson’s first 11 goals this season were of the game-winning variety and were recorded in his first 24 games.  He did not record another game-winner over the remainder of the regular season (58 games).  He did score the series-clinching goal in overtime of Game 6 against the Toronto Maple Leafs in the first round of the playoffs.

Marcus Johansson was quite productive on the road this season (16-18-34, plus-14, in 41 road games), but March 28th was a special evening, even by Johansson’s road record standard.  It was a “powerful” night for Johansson. After T.J. Oshie and Jason Pominville exchanged goals in the first 23 minutes of the contest, the Caps scored a power play goal when Johansson took a feed from Nicklas Backstrom, showed shot for an instant, and then laid off a pass for Alex Ovechkin to one-time past goalie Devan Dubnyk to make it 2-1.  Five minutes later, the Caps were on another power play when Johansson held the puck at the Wild goal line, finding Kevin Shattenkirk att the top of the zone, whose turn it was now to lay off a pass for Ovechkin to one-time past Dubnyk to make it 3-1. After the Wild got back to within a goal, the Caps had another power play mid-way through the third period.  Off a faceoff, Nicklas Backstrom dug the puck off the right wing boards and fed Johansson.  From the goal line, Johansson returned the puck to Backstrom, who fed it across to Ovechkin.  At the top of the left wing circle, Ovechkin wristed a shot past Dubnyk to make it 4-2.

The Caps could not hold the lead, the Wild getting a pair of late goals to force overtime.  Then, in the second minute of overtime, persistence paid off.  Oshie and Johansson exchanged passes, Johansson’s feed to Oshie giving him a chance for a lay-up game-winner, but it missed the mark.  Oshie retrieved the puck and handed it off to Johansson circling out from behind the net.  Johansson found Oshie for a one-timer from the left wing circle that sailed over Dubnyk’s left shoulder on the far side, and Johansson had his fourth assist of the game, his first four-point game in the NHL and only the fourth Capital since the 2004-2005 lockout to record four helpers in a single game (Backstrom (10 times), Evgeny Kuznetsov, and Alex Ovechkin are the others).

It is hard to find a truly bad Johansson game this season, but his first game after Christmas comes close.  Three of Johansson’s first 15 shifts ended in goals, none of them scored by the Capitals.  Not that any of them were a product of his play.  The first came off a ghastly turnover by Dmitry Orlov just inside the offensive zone that the Islanders took the other way for a score.  The second came when an Islander was left all alone at the far post to receive a pass that he had time to settle and swat past goalie Braden Holtby.  The third came when an Islander was left alone again at the post, free to redirect a pass behind Holtby.  The Islanders got another goal a minute later, for which Johansson was not on the ice, and it was enough for a 4-3 Islander win.  For Johansson it was a study on why plus-minus isn’t the best way to measure a player’s individual performance, at least on a game-by-game basis.  His minus-3 was his worst of the season.

Marcus Johansson occupied that sliver of space where a point here or there might have mattered.  Or not.  The odd part of his scoring in the postseason was not that he tied Alex Ovechkin for fifth on the team in points, or that he tied Justin Williams for third on the club in assists.  It was that the Caps were 4-3 in games in which he had a point, 3-3 in games in which he did not.  On paper, it was Johansson’s best postseason ever – eight points (most in six postseasons) and two goals (tied for best and included a series-clinching overtime goal). What he did not have was a goal in any of the seven games of the Penguin series in the second round, and he did not record a shot on goal in either Game 6 or Game 7.  His performance, as much or more than any Capital, was not a case of having a poor postseason as much as one that might be haunted by “what if he had one more point?”

Marcus Johansson had his best regular season.  He is perhaps the least appreciated member of this club in terms of his offensive contributions.  And while he does not get a pass for his performance in the postseason, his was not as egregious an example of not showing up at key moments (yes, Game 7 against Pittsburgh – as it was for just about the whole squad – stands out as an exception).  Had he made a contribution in Game 7 to push the Caps forward to the conference finals, he might have been guaranteed a grade of “A.”  However, as things turned out…