The Peerless Prognosticator is ON THE AIR!!! -- Games 53-54: Capitals vs. Blue Jackets, February 6th/9th

The Washington Capitals, who have dropped five of their last seven games (2-3-2) and their last two contests, will look to right their ship when they battle the Columbus Blue Jackets in a home-and-home series that starts at Nationwide Arena in Columbus on Tuesday and concludes at Capital One Arena in Washington on Friday.

The Capitals are not the only club in a slump.  Columbus has dropped six of their last eight games (2-5-1), and they are 5-8-2 in 15 games since Christmas, only two of those wins coming in regulation time.

Scoring has been an issue for the Blue Jackets.  In that 15-game stretch since Christmas they have a total of only 30 goals.  And while 15 different Blue Jackets have recorded goals, no one stands out.  Artemi Panarin leads the club over that span with five goals in the 15 games.  However, he has just three in his last 14 contests.  It is a disappointing stretch for Panarin who, in his first year in Columbus, is underperforming his production from his two years with the Chicago Blackhawks, both of which were 30-goal seasons (30 as a Calder Trophy-winning rookie in 2015-2016 and 31 last season).   He has been able to contribute on the other end of scoring plays, though.  With five assists in his last ten games, he has eight points in that span, a large share of the 21 goals the Blue Jackets scored in that span.  Just don’t let this guy get to the freestyle competition.  He leads the league with six trick shot goals in the Gimmick.  In five career games against the Caps, Panarin is 1-2-3, plus-2.

Seth Jones is the team leader in points in their 15 games since Christmas (1-11-12), but his is a power-play weighted performance profile.  His goal was on a power play, and he has five power play assists in that span.  He is also a minus-4.  That plus-minus comes in spite of a rather impressive individual shot-attempts for percentage (54.12) that is third-best on the team in that span and best among Columbus defensemen.  Jones comes into the first of this two-game set without a point in his last two games.  This might sound like much, but it is the first time he is without points in consecutive games in almost two months, since he came up dry against the Arizona Coyotes and Edmonton Oilers in early December.  He went 19 games without consecutive games without a point until he was blanked by the San Jose Sharks and New York Islanders last week.  In those 19 games he had points in 15 contests.  Jones is 2-4-6, plus-1, in nine career games against the Caps.

Last season it was Zach Werenski making a splash as a rookie for Columbus.  This year, it is Pierre-Luc Dubois, who leads the team’s rookies in scoring overall (10-13-23) and is in the top-15 among all league rookies in goals scored.  Not that this is a surprise.  Dubois was the third-overall pick of the 2016 entry draft, lost in the glow of Auston Matthews and Patrik Laine picked ahead of him, perhaps.  As with many rookies, though, his production has been a bit uneven.  For instance, the assist he recorded in his last game, a 4-3 loss to the New York Islanders, broke a seven-game streak without a point, his longest such streak since he went 11 games without a point to close October.  He did, however, have a pair of assists in his only appearance against the Caps to date, a 4-3 loss at Capital One Arena on December 2nd. 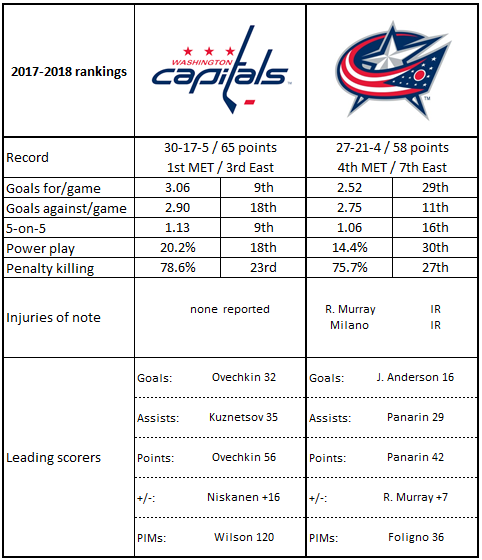 1.  Why have the Blue Jackets struggled since Christmas? Well, yes, there is the lack of scoring, but that 58.3 percent penalty kill (21-for-36) over their last 15 games might have something to do with it, too.  It is the worst penalty kill since Christmas by a wide margin (Ottawa: 67.3 percent)

2.  If there has been a silver lining in those penalty killing numbers, it is in not having to kill penalties often.  Their 36 shorthanded situations since Christmas are tied for the second-fewest in the league in that span (Arizona: 28).

3.  One thing the Blue Jackets have slipped in during their 15-game slide is outscoring opponents.  Over the full season they have outshot opponents 30 times in 52 games, but they have done so only five times in their last 15 games.

4.  The outshooting-outshot problem is one of allowing a lot of shots on goal.  Columbus has allowed opponents 35 or more shots 21 times this season, tied for sixth-most in the league, but nine of those instances have come in the 15 games since Christmas.

5.  One other noteworthy number in the Blue Jackets’ 15-game slump: 6.2.  That is their shooting percentage, second-worst in the league over that span (Edmonton: 6.1 percent).

2.  Ten of the 19 skaters over the last seven games are under water in plus-minus, Nicklas Backstrom worst among them at minus-6.

4.  John Carlson is the surprising team leader in shots over the last seven games (32), nine more than Alex Ovechkin.

5.  Despite the lack of goal scoring on their own, Jay Beagle and Tom Wilson are two of the three Caps with a plus-2 over the team’s last seven games. Alex Chiasson is the other (in only five games), so cheers for the grinders.

The Columbus Blue Jackets have struggled over their last 15 games, but for Nick Foligno it has just been a bit odd.  He is tied for second in goals scored over that span (three, with the injured Sonny Milano and Josh Anderson), and he is third in points (nine), but he is a minus-4 despite seven of those points coming at even strength over that span.  He had a strange streak from New Year’s Eve through January 12th, a span of seven games, in which he was a “minus” player six times (minus-6 overall).  In any case, it is Foligno as a goal scorer more than as a set up player that matters.  Columbus is 7-3-0 when he recorded a goal this season, but they are just 5-4-1 when he recorded an assist.  And unlike some players teams depend on to score (and not play defense), the team does not suffer with his getting more minutes.  Columbus is 10-4-3 in the 17 games in which he logged more than 20 minutes (all three extra time losses coming in the Gimmick).  Foligno is 7-13-20, even, in 32 career games against Washington.

Dmitry Orlov has established himself firmly as a cornerstone defenseman on this edition of the Capitals. He is tied for the team lead in goals among defensemen (seven, with John Carlson) is tied for second in assists (12, with Matt Niskanen and Madison Bowey), is second in points (19), is tied for third in plus-minus (plus-8, with Taylor Chorney), is one of three Caps defensemen with game-winning goals this season (Carlson (3) and Niskanen being the others), is second in shots on goal (88), leads in shooting percentage (8.0), and is second in ice time per game (23:07). He is second in hits (86), third in blocked shots (76), and he is the only Capital defenseman to break even on takeaways and giveaways (31 each).  He, Orpik, and Carlson are not just the only Capital defenseman to appear in every game thus far, they are the only ones to appear in more than 45 or more games.  Orlov has been a bit more productive in the 2018 portion of the season, going 3-4-7, plus-1, in 12 games since the start of the new year.  With his next even strength goal he will tie Robert Picard for 10th place on the all-time list of Caps defensemen in even strength goals.  In 13 career games against Columbus, Orlov is 1-2-3, plus-4.

These two teams are more or less stalled at the moment.  Each might be the other’s tonic to break out of their respective slumps.  If the Caps are looking to get their power play going, this might be the team to do it against, even if they are trying to do it against a world-class goalie.  Sergei Bobrovsky has a respectable .918 save percentage in 12 appearances over the Blue Jackets’ 15-game slump, but he is facing a high shot volume that is pumping up his goals against average (2.72 over that span).  It is a problem not unlike that faced by the Caps, who have allowed 25 goals over their own 2-3-2 slump.  It could make for a couple of high-scoring games from teams we are not accustomed to seeing allow a lot of goals.