The Peerless Prognosticator is ON THE AIR!!! -- Caps vs. Ducks, December 15th

“Hey, cuz…you comin’ down with somethin’?”

Yeah, must be dat flu bug dat’s goin’ around the team…snuck into mah blog or sumpthin’

“Yeah, well…I got just the thing.”

You’re not gonna feed me some weird critter are you?

“No, we’re savin’ the muskrat fer Christmas dinner. Granny Prognosticator always used herbs and berries and stuff. Like this elderberry here, and we got some wild cherry…”

Some wild cherry brandy would be –sniff—nice…

“Maybe some garlic instead.”

Garlic! I’m not some werewolf, and won’t that give me bad breath?

“No worse than usual, but we have goldenseal for that, and it helps with the flu.”

You’re a regular Walgreen’s aren’t you?

“Yeah, well, I got one more thing here…some horseradish in tomato juice is supposed to be good for what ails ya…”

Add a shot of vodka and a celery stalk, and you have a deal.

Ah, well… best get on with this. If the boys can play through the flu, we can peck at a keyboard. Six in a row. The last time the Caps lost six in a row was near the end of the 2006-2007 season. And like the 2007 streak, the Caps can’t score, can’t defend, have a lousy power play, and have a porous penalty kill…

It’s not one thing. And now, the Anaheim Ducks come to town on a 6-2-1 run after being under .500 as recently as November 26th. The odd part of the run is that they have not lost a game in which they scored in regulation (psst…cuz, that means they were shut out in their two regulation losses). It’s not as if the Ducks are doing it with great offense. In the 6-2-1 run the Ducks scored 27 goals (3.00 a game) and have only 15 in their last six games. Defense? It hasn’t been bad – 24 goals (2.67 a game), but they have allowed four of more goals three times in the last nine games.

All Anaheim has been doing is finding a way to win. Not a big streak, mind you, but with regularity. Enough so that Randy Carlyle, who was on the short list of coaches who might be relieved of duties earlier this season, was given a one-year contract extension. Score one for patience. The team Carlyle will be leading into Verizon Center tonight is similar to the Caps in some respects, as the overall numbers show: 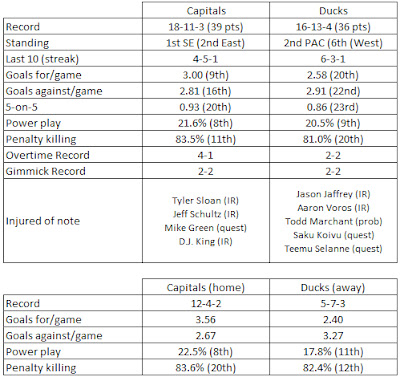 Both teams are suffering at five-on-five (both allowing more five-on-five goals than they score). Both teams are good, if not great power play clubs (both in the top ten). Both teams are in the low 80’s in penalty killing. The difference, though, is that the Caps have sunk to this level with recent play, while the Ducks have risen to it with theirs.

What the Ducks don’t have that the Caps do is scoring balance. The Caps have 18 players with at least five points this season, the Ducks have but half that number. And leading the way is Corey Perry. His 16-19-35 scoring line is impressive enough, but he is also an annoying little snot who has a penchant for the aggravating penalty. He is not in the class of a Sean Avery as a nuisance, but of the 16 minor penalties he has taken so far this season, three are for roughing, four are for slashing, and he also has a fighting major to go along with them. He bears watching. In his last game – a 6-2 win over Minnesota – Perry recorded his first hat trick, going 3-2-5. He is 4-3-7 in his last three games. Caps fans are fond of saying “We coulda had Getzlaf” (a reference to Ryan Getzlaf, Perry’s teammate who was selected one spot after the Caps took Eric Fehr in the 2003 draft), but Perry was taken 28th in the 2003 draft. The Ducks had quite a first round that year.

Speaking of Getzlaf, he is second on the team in scoring (10-22-32) and seems to be awakening after a brief slumber. He was held without a point in three consecutive games earlier this month, but has points in each of his last three (2-3-5), including a pair of goals against Minnesota his last time out. He’s another one who can’t seem to be bothered with the obstruction sort of penalties when he gets whistled. Five of the nine minors he has taken this year are for high-sticking, slashing, and roughing. One thing to watch for with Getzlaf, of the ten goals he has five of them are in the third period or overtime.

Cam Fowler was drafted by the Ducks just this past June. He stepped right into the lineup and has plyed well enough to get some mention as a Calder Trophy candidate. In 27 games so far, the rookie defenseman (who could pass for Karl Alzner’s kid brother) is 3-12-15, second among rookie defensemen in scoring. He is also getting a heaping helping of responsibility – he leads all rookie defensemen in average ice time per game. He comes into tonight’s game with points in three of his last four games and has been on the minus side of the ledger only once in his last nine contests.

In goal, Jonas Hiller has appeared in 28 of the 33 games played by the Ducks so far. One would think he will get the call tonight. Not exactly heralded before coming to the NHL (he was signed as a free agent in May 2007), he has assembled quite a resume to date. Now in his fourth season, Hiller is 77-56-9 (seven shutouts), 2.55, .919 for his career. And now, he’s in a groove. He has not allowed more than two goals in any of his last five appearances (3-1-1, 2.06). He can be streaky, though. So far this season he has a five-game and a three-game winning streak (he is currently on a four-game streak without a loss in regulation); he also has a four-game and three-game losing streak (all in regulation).

No longer is Bobby Ryan the consolation prize of the 2005 draft (taken second after Sidney Crosby was selected by Pittsburgh). Ryan has posted consecutive 30-plus goal seasons, and he is on a pace to match his career high of 35 set last season. However, he has been in a slump. Before posting a goal and two assists in the win over Minnesota last time out, Ryan went five consecutive games without a point. He has quite a disparity in points-scoring, home and away. While he is 8-10-18 in 18 home games, he is 6-2-8 on the road. Although it might be true for any player that they score when their teams wins and don’t when they lose, Ryan has only four points in 17 losses, 22 points in 16 wins. If he gets on the score sheet, it isn’t likely to end well for the Caps.

Sure, Alex Ovechkin is having his troubles, but Semin has not yet scored a goal in December, during which the Caps are 1-5-1 and have only 12 goals in all. The odd part about his season scoring line is this – of his 18 goals, 11 of them have come against Southeast Division teams (six against Tampa Bay, four against Atlanta, one against Carolina). He has two in six games against Western Conference teams. Semin is described as “day-to-day” with an undisclosed ailment. It would be nice to have him for this one. He has three goals in two career games against the Ducks.

1. Amnesia, Part I. Forget December to date. It didn’t happen. None of it. The month – and the rest of the season – starts now.

2. Amnesia, Part II. Forget all that mumbling about the Caps needing a goaltender, a center, a defenseman, a spine, a new coach, grit. You put up 121 points last season. Through November you were on a pace for 118 points. You’re not a bowl of poutine left on the counter.

3. Amnesia, Part III. Forget all the fancy-schmansy stuff. The cameras, the commercials, the hoopla. Play your game…play your game.

In the end, the Ducks are something of a mirror held up to the Caps’ collective faces. Anaheim will be in the Caps’ faces all night long. They are ornery, they are talented, and they are coming to town winning games at a steady pace these days. They are the kind of club that can provide a test – and a means of redemption for the way the Caps have played so far this month – or they can be the latest club to make the Caps look like pretenders instead of contenders. Losing a fifth straight game at home, with New Jersey (who pounded the Caps last time they met) and Pittsburgh next coming to town, is going to have folks more than mumbling about the Caps problems.

The Caps have had a couple of days off to practice and get their heads back on straight. Will it have the intended result? Uh…we, uh… think so…