Every red-blooded American is taking off work today and is hunched over their bracket worksheets for the NCAA Men's Basketball Tournament. We are no different. And so, we bring you the only bracket you'll ever need (assuming your bird cage needs to be relined)... 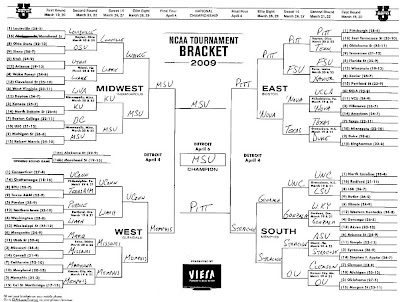 The Peerless Prognosticator is ON THE AIR!!! -- Caps vs. Lightning, March 19th


The Peerless Prognosticator is ON THE AIR!!!

It’s Thursday in Tampa, and the Caps are visiting the Lightning. For once, it’s not a desperate team the boys are playing…it’s not a good team…

The Caps are doomed.

Just kidding. It’s the Lightning, and as we were visiting their web site, we noticed, there isn’t any evidence of that whole “Hockey Bay, USA” campaign they trotted out to start the year. Nowhere to be found…

Excuse me…and you are?

“I don’t want to say…I was the genius who came up with that ‘Hockey Bay’ Idea, and I’d like to work in advertising again.”

Oh…I get it. But hey, one bad idea isn’t going to kill a career, is it?

“Yeah, that was me…and tht McDonalds ‘I’d hit it’ ads?

“Me again…but I swear, I’m going to come up with an idea that’ll make ‘em take notice. Oh! Oh! This is great! I could find that dog…the one who did those Taco Bell commercials. Oh, this is so good…I could dress him in a little hockey helmet and a Marty St. Louis sweater. Oh, they’re gonna love this…I could get my old job back…”

Do you really think...

“…and he could pop up over the top of the bench…just like Marty! And he looks into the camera and says, “¡Yo quiero Lightning Hockeyl!” 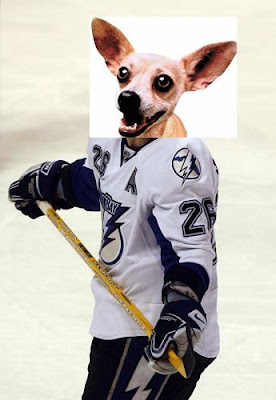 Well…while our new friend, who lends a new meaning to “Mad Men” ponders the next great Lightning ad campaign...

If you look up the word “slog” in the dictionary, you will find that it means, “a long, tiring walk or march.” You might add “skate” to that, and you might find a team picture of the Lightning, too. It’s been that kind of season for the Bolts. March has been just the latest installment of it. Tampa Bay is 3-2-3 for the month, and although it is probably early to be mentioning it, it represents their first “Over-.500” month of the season. As for the season, here is how their numbers play out… 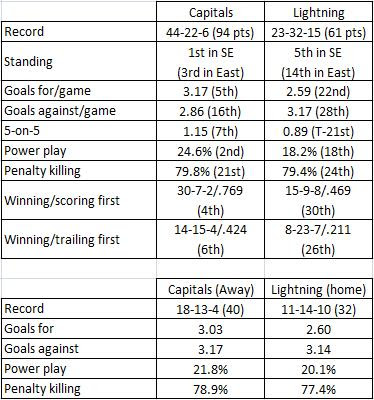 It certainly has been a month of highs and lows. On their way to being outscored for March by 33-28, the Lightning have had a game in which they scored eight goals (an 8-6 win over Calgary to start the month), and they’ve had one in which they gave up nine (a 9-3 loss to Carolina). It has not been a team that has had an ability to win the close, low scoring game this month. In each of their three wins, the Lightning have scored at least four goals. In each of their five losses, they’ve scored three or fewer.

Special teams have been something of an adventure this month for Tampa Bay. While the power play has sped along at a 31.2 percent clip (10-for-32), the penalty killers have spent their time giving it all back by killing off only 24 of 33 shorthanded situations (72.7 percent).

The last time these teams met – on Valentine’s Day – the Caps’ Mike Green set a record for defensemen for consecutive games with at least one goal. In that 5-1 loss to Washington, Ryan Malone scored the only goal for Tampa Bay. Since then, Malone is 5-4-9, +1. It’s about what you’d expect, given the pace at which he’s scored goals and points over his career, but perhaps not exactly the production you’d expect for a guy pulling down $4.5 million this year (and every year through 2014-15). He’s had a similar rate of production against the Caps for his career – 5-7-12, +5, in 18 career games. He has a pair of goals in three games against the Caps as a member of the Lightning.

Steven Stamkos might be turning a corner and finally getting it. The number one overall pick in last summer’s entry draft has struggled for long stretches this year as he serves his apprenticeship rookie year, but in March he is 3-5-8, -3, in eight games. The plus-minus is still a problem (he is minus-12 for the year), but his offensive production does seem to have picked up. He has not, however, registered any points against the Caps in three games this year. And, yes, he is minus-3, too.

Jeff Halpern didn’t get traded, leaving him to toil in relative obscurity on Florida’s Gulf Coast. It’s been a difficult year for the former Cap. He missed the first 30 games of the season to a knee injury, and it hasn’t been a year for the ages since his return. At 4-8-13 through 40 games, he’s on a pace to roughly match his first year in Dallas, which wasn’t one for the yearbook, either (8-17-25). In five career games against his old team, he is 1-1-2, +4. That includes an assist and a minus-3 in two games this year with Tampa Bay.

On defense, Tampa Bay has dressed almost as many players as teams have dressed on their entire roster. 16 defensemen have dressed for the Lightning, and one thing can be said of the lot. There are no answers to the Lightning’s problems on defense in this group. Not in the near term, anyway. Defense? No defenseman who has played more than 20 games is better than a minus-3.
But the Lightning do have a defenseman with a plus-rating (two, actually). Richard Petiot, he of the Petiot-for-Kolzig-Heward-Rogers-a draft pick-a bushel of oranges-a case of sun screen-and four tickets to Saw VI (due out in May 2009) trade, has played four games for the Lightning and has compiled two assists and a plus-3 rating. That could change considerably this evening.

The Lightning also have dressed five goaltenders this year (do you get the feeling this year has been one long audition for extras in a “Saw” movie?). Mike Smith was the number one goalie for most of the year, but he’s been out since January 30th after a concussion caught up with him. Karri Ramo has assumed the duties of shooting gallery target number one goalie. He’s been the goalie of record in 13 of 20 games since Smith went out. He is described as uncommonly quick. Well, he hasn’t been quick enough to avoid a 3-6-4 record or allowing 3.42 goals-per-60 minutes with a .903 save percentage since taking over.

Lashoff came to the Lightning from Boston in the Mark Recchi trade. Coach Rick Tocchet is on record as stating that the power play quarterbacking duties will be his. For his part, Lashoff says, "...it's an opportunity for me to step up and come to the table and bring what I can bring. It's a part of the game that is an asset to me, my offensive ability. I have to take advantage of it." Now that, dear reader, is a fine example of the Ebby Calvin LaLoosh school of clichés. Think he’s up to the task? He has one point in 17 games this year and eight points in 47 career games. And, he took a gash on the leg in a game on February 28th that took 30 stitches to close. You can cease to wonder why Tampa is not a contender this year.

Fedorov had a bug earlier in the month that kept him out of a couple of games, but he looked pretty good against Florida the other night. He seems always to look good against the Bolts. In 25 career games, he is 15-22-37, +9, with five power play goals. He’s been a part of the F Street or the F-Bomb, or the Fe-Fi-Fo, or whatever F-related name you want to call it line with Tomas Flesichmann and Eric Fehr. It isn’t a bad line in concept. Flesichmann is a playmaker, Fedorov can be a playmaker or a scorer, Fehr is (we hope) a finisher. Against this defense, they should get opportunities to pad Fedorov’s career stats against the Lightning.

Tampa Bay has four defensemen who are likely to be out: Paul Ranger, Andrej Meszaros, Marek Malik, and Cory Murphy. That’s 1,330 games of NHL experience on the bench. Guys like Lashoff and Petiot are being thrown into the deep end of the pool, and tonight they will be in the really deep water against the Caps. On paper, the Lightning shouldn’t be within three goals of the Caps, even playing at home. But Tampa can score – Vincent Lecavalier and professional irritant Martin St. Louis still toil for this team. It could be a high scoring game, which might not be to Coach Bruce Boudreau’s liking, but it could be entertaining for folks watching on TV.