In the four years leading to the 2015-2016 season, ten skaters appeared in at least 200 games and recorded at least 0.95 points per game. It is a who’s who list of elite players. One of them is the Washington Capitals’ Nicklas Backstrom, perhaps the player with the fewest column inches and pixels devoted to his performance of any of the ten.  But if he was unappreciated in reporting, his coaches certainly held him in high regard.  As head coach Barry Trotz put it in the first month of this season:

“I’m telling you guys. You guys out West don’t see him. I didn’t see him enough. He’s the best two-way forward I have ever coached, and I’ve coached some pretty good guys, like Mike Fisher.  Everybody just thinks he’s an offensive player, but he’s as good as there is in the business on both ends of the ice.”

And that first month of the season was another in the uncommonly persistent pace at which Backstrom records points – four goals and four assists in the seven games in which he played (he missed the first three games of the season recovering from arthroscopic surgery on his hip over the summer).  It was a pace he maintained over the course of the season.  Looking at his ten-game splits, the range of points recorded was between eight and 11 over his first six splits.  He fell off somewhat in his last two splits, recording seven points in each (including in the eight, 12-game split to end the season), perhaps as much a function of the Caps having clinched the league’s best record as any sluggishness in his play.

As it was, Backstrom finished the season with 20 goals, his highest total since he has a career high 33 in the 2009-2010 season.  He had his third straight 70-point season.  It, and the body of his work in previous seasons, garnered him his first career All-Star Game appearance in Nashville in January.

That body of work had another solid year added to in in terms of possession numbers.  For the eighth time in nine seasons, Backstrom finished with a Corsi-for at 5-on-5 over 50 percent.  For the ninth time he finished Corsi-for/Relative in positive territory (numbers from war-on-ice.com).

His consistency was, as one would expect, consistent at a game-to-game level.  Only twice this season did he go as many as three consecutive games without a point.  Both of them came in the last 30 games of the season.  Again, a product of the Caps’ position in the standings or was it something in Backstrom’s play?  Remember that Backstrom missed three games late in the season with an upper body injury and sat out the season finale.  His second instance of three consecutive games without a point came two weeks before he missed those games.  Given the mystery that attaches to reporting of injuries in the NHL, perhaps he wasn’t 100 percent as the season was winding down, either. 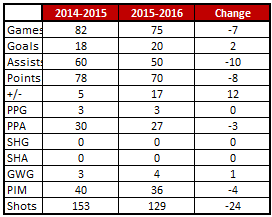 Fearless’ Take… Fun Backstrom Fact:  He is the only player in the league to finish each of the last three seasons with at least 50 assists (he had 50 this season) and at least 70 points.  Only three other players did it twice (Sidney Crosby, Erik Karlsson, and Joe Thornton).

Cheerless’ Take… Those last three columns in that chart up on top have a strange look to them.  That minus-39 in his fourth ten-game segment in Corsi plus/minus sticks out, especially after he was plus-101 over his first three segments.  He was in minus territory in seven of those games, but the odd thing about it was, the Caps went 8-1-1. That seemed to be something of a turning point in Backstrom’s season.  To that point, he had a plus-52 in scoring chances/on ice over his first three segments.  He was minus-20 in that fourth segment, then a minus-1 over his last four segments.  His 5-on-5 goal differential did not seem to change much, but those underlying numbers did not look as good late as they did early.  A result of the Caps lapping the field in the standings?  Maybe, but that doesn’t make them look any better.

If it was a memorable game, it was because a milestone was achieved by Backstrom in the most “Backstromian” way.  Late in their contest against the Tampa Bay Lightning, a game in which the Caps came back from a 3-0 deficit to take a 4-3 lead, John Carlson dug the puck out of the corner to the right of goalie Braden Holtby.  The puck slid out to Alex Ovechkin along the wall, who fed it to Backstrom exiting the defensive zone.  Backstrom skated through the neutral zone with an empty Lightning net at the other end and only forward Vladislav Namestnikov back.  Backstrom could have fired the puck to the empty net, but he fed it off to T.J. Oshie on his right, who scored the empty net goal in the Caps’ 5-3 win.  The assist was Backstrom’s 600th career point.  He became the fourth player in Capitals’ history to hit the 600-point mark and finished the season as one of only 37 active players with at least 600 NHL points, sixth on that list in points per career game.

What an odd game this was, for the Caps and for Backstrom.  There was a lot of back and forth over the first 25 minutes, the Pens opening the scoring with a pair of first period goals, the Caps tying the game with a pair to start the second period.  At that point, though, the Caps imploded, giving up the game’s last four goals in a 6-2 loss.  For Backstrom, it was the only game this season in which the Caps lost when he skated fewer than 17 minutes (10-1-0).  The rest of his scoring line was equally forgettable – no points, one shot attempt (on goal), one giveaway, 7-for-17 in faceoffs.

Nicklas Backstrom’s postseason illustrates the difference between “productivity” (those underlying numbers like Corsi) and “performance” (goals, points, wins).  If you look at the two series, in both of which Backstrom and the Caps played six games, his 5-on-5 numbers were almost indistinguishable – 54.7 percent Corsi-for against the Philadelphia Flyers, 55.5 percent against the Pittsburgh Penguins in the second round.  He had 21 shot attempts in the six games against the Flyers, 20 in the six games against the Penguins.  He was a plus-19 in 5-on-5 Corsi-differential in both series.  His Corsi-for and Corsi-against in the two series were almost identical (numbers from war-on-ice.com).

The difference was in the performance numbers.  Backstrom had two goals in the Flyer series, none against the Penguins.  He had five assists against Philadelphia, four against the Penguins.  It did not matter so much in the regular season when Backstrom did not have a goal (remember that 12-3-3 record noted above), but in the postseason the Caps won both games in which he had a goal and went 4-6 when he didn’t.  This wasn’t the reason the Caps failed to advance, but one does wonder what one timely goal might have meant.  When one says “there is enough blame to go around” with respect to the Caps’ second round loss, it doesn’t jump past Backstrom to the next player, either.

The summaries we have written about Backstrom over the years have almost as consistent a quality as his play.  He’s a consistent player, perhaps none more so in his nine seasons in the NHL.  In some ways it makes him as important – as valuable – a player as Alex Ovechkin.  But that can be a two-edged sword.  As long as Backstrom is that consistent player, the Caps are a consistently successful team.  But when it falters in the least, the Caps will have problems unless others step up in a big way.  And that was a scenario that played out to some extent in the postseason.  Backstrom’s second round numbers were almost identical in terms of possession, but his performance numbers slipped just slightly.  It was not the proximate reason the Caps left the playoff stage early, but as close as the series was with the Penguins, a point here or there might have been a difference-maker, enough to make up for the larger shortcomings of some of his teammates.