It makes one wonder as a Washington Capitals fan, what would a roster of active former Caps look like?  Well, wonder no more, because we can build such a thing… 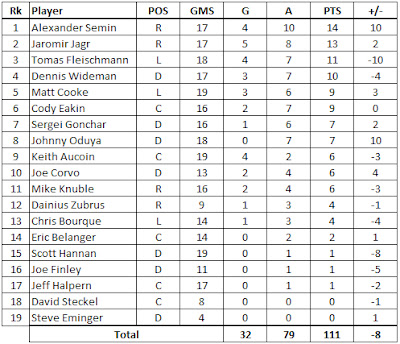 If you were thinking that the Caps had off-loaded a bevy of players who would perform better than the current crop, well… you would be largely mistaken.  The leading scorer of this group is, as you might expect, Alexander Semin.  His four goals would rank no higher than fifth on the current edition of the Caps, tied with Eric Fehr.  His “ex-Caps” club leading 14 points would be tied with the Caps’ own Alex – Alex Ovechin.

Our old friend, Jaromir Jagr, leads the ex-Caps in goals with five, a total that would leave him tied with Joel Ward for fourth place on today’s Caps.

As a group, this is an offensive-challenged lot.  If this club had played in 19 games (the number played by Keith Aucoin and Scott Hannan), it would average fewer than two goals per game, by far the worst in the league.  It would be weak down the middle with a top line of Cody Eakin centering Semin and Tomas Fleischmann.  That line would have a total of 10 goals to its credit.  Its second line might feature Keith Aucoin centering Jaromir Jagr and Matt Cooke, a line with 12 goals (well, that one might be more productive than the Caps’ second line).

The defense is going to be speed-challenged.  Dennis Wideman and Johnny Oduya might make up the top pair, not a bad pairing, but Oduya might be Odoing a lot of covering for his partner.  A second pair might include Sergei Gonchar and Scott Hannan.  Gonchar seems ageless – he has seven points and is plus-2 for a good Ottawa team, but he is without a point in five games since Erik Karlsson went out of the lineup after being Ginsued by Matt Cooke.  Scott Hannan is displaying his customary lack of offense – it is not his thing – but he is minus-8 for Nashville, by far worst among defensemen for the Predators.  After that, Joe Corvo and Joe Finley?  Joe… My… God!

The goaltending is hot and cold.  There is Semyon Varlamov as the nominal number one goalie with two shutouts, but a 2.84 goals against average and a mediocre save percentage of .908.  And he’s the best of the lot.  Tomas Vokoun (.899) and Jose Theodore (.893) are both below the goalie’s equivalent of the Mendoza Line of a .900 save percentage.

On balance, if you take the goalies’ records and covert them to a 19-game record, this ex-Caps team would be 7-10-2.  Those 16 standings points would be good for 13th in the East, slightly better than the current Caps after 17 games (6-10-1), but the records are comparable.  Both teams suffer from leaky defense and inconsistent goaltending overall (the recent resurgence of Braden Holtby notwithstanding), although the current Caps are a more proficient offensive team.

Either way, for folks who think the grass is always greener on the other side, you might want to rethink your appreciation of the shades of green.