The Peerless Prognosticator is ON THE AIR!!! -- Caps vs. Penguins, March 8th

It’s Daylight Savings Sunday here in Washington, where we turn our clocks ahead because we just can’t wait another hour for hockey to start. And this afternoon, it’s the Pittsburgh Penguins making their second and very possibly last visit to Verizon Center for the 2008-2009 season. The Penguins coming to town puts us in mind of those things you just hate doing in life – those “dirty jobs.” It’s like that show on The Discovery Channel, “Dirty Jobs.” We were wondering how certain jobs in the NHL might stack up on the “dirty jobs” list… 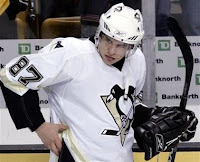 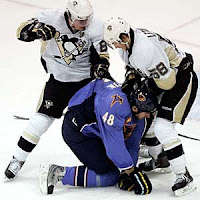 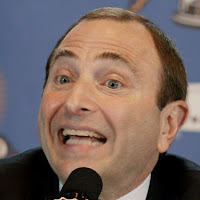 Dirty jobs, all…but someone has to do them. And today’s “dirty job” for the Caps is beating the Penguins. It’s something the Caps have done three times in three tries this year, which means that the good guys will be looking to sweep the season series against the Penguins since, well…ever. They could go undefeated against the Penguins for the first time since the 1984-1985 season (6-0-1).

It will not be an easy job. The Penguins come into this game with a 7-1-1 record under interim coach Dan Bylsma. The only loss in regulation in that streak was to the Caps, a 5-2 spanking on February 22nd. But over these last nine games, the Penguins have rediscovered offense (31 goals, 3.44/game), defense (22 goals, 2.44/game, including only seven in their last five games), and special teams. 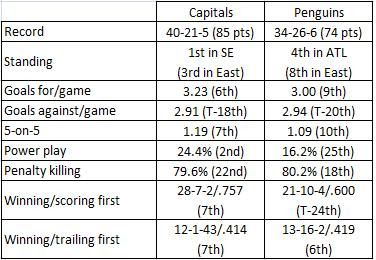 Pittsburgh’s eternal quest for a winger – any winger – who can actually contribute offensively has settled on Chris Kunitz and Bill Guerin. The former was obtained (with prospect Eric Tangradi) in trade for defenseman Ryan Whitney on February 26th, the latter in a trade with the Islanders for a conditional draft pick (anywhere from a fifth to a third) on Trading Day. Kunitz has been something of a revelation to the Penguins thus far – 3-2-5, +3 in four games with his new team. Folks in Pittsburgh probably have forgotten already that the winger he is more or less replacing – Miroslav Satan – was waived (and unclaimed), thus paving the way for his becoming acquainted with the charms of northeastern Pennsylvania and the Wilkes-Barre/Scranton Penguins.

Guerin, meanwhile, has played in one game for his new club and has an assist. Here is how bad things had gotten for the Penguins and their search for wingers. Kunitz and Guerin, neither of whom at this point in their respective careers can be considered top scorers (Kunitz has never had more than 60 points in a season, and Guerin hasn’t topped that mark since before the lockout), now rank fourth and fifth in scoring with Pittsburgh, including their totals with their old clubs.

That the newcomers rank so high on the scoring list is a reflection of just how top-heavy the Penguins are in scoring, dependent on the considerable skills of Evgeni Malkin and Sidney “Walnut Picker” Crosby. Here is another way to look at it. Last year, for a team that reached the Stanley Cup finals, two players other than Malkin and Crosby reached 60 points (Sergei Gonchar and Petr Sykora), three if you count late pickup Marian Hossa. This year, at the rates they are scoring, no Penguin other than Malkin or Crosby will reach 60 points (Sykora is on a pace for 55).

Under “enigma,” you might find the picture of Jordan Staal. A second-overall pick in the 2006 draft, Staal – only 20 years old – is now the veteran of 229 NHL regular season games. By way of comparison, Washington’s Alexander Semin just turned 25 and has 239 games of NHL experience. But whereas Semin has 101 goals in his career, Staal has barely that many points (109) in his. Part of the problem is Malkin and Crosby. Staal – a center by trade – has been stuck with third line and penalty killing duty, or shoved off onto the wing to get him playing time. His development has been stunted by the presence of his gifted teammates. But like some other Penguins, he seems to have jumped a level in performance under the new coach. He is 2-2-4, +6 in his last four games.

Along with the arrival of Bylsma behind the bench, there has been the return of Sergei Gonchar to the ice. Making Whitney disposable in obtaining Kunitz on the wing, Gonchar has picked up where he left off his career – scoring points from the blue line. Scoreless in his first – and former coach Michel Therrien’s last – game, Gonchar is 2-5-7, +3 in eight games under Bylsma. Gonchar has also made a nice living off his former team. He is 3-14-17 in 14 career games against the Caps. Gonchar missed Thursday’s game against Florida welcoming his second child to the world, but with fellow defenseman Alex Goligoski being reassigned to Wilkes-Barre/Scranton, one would think Gonchar will be back in the lineup this afternoon.

Perhaps no one has benefitted more from the change in coaches than goalie Marc-Andre Fleury. He’s started all nine games under Bylsma and finished eight of them (he was pulled in the 5-2 loss to Washington). He is 7-1-1 since the coaching change (2.54, .914, one shutout). But what might have affected Fleury’s results most is the change in coaching philosophy. The more aggressive posture taken by the Penguins on offense means fewer opportunities at the other end. His shots faced has dropped from 31.9/60 minutes to 29.6 in his last nine games and 28.9 in five games (all wins) since he was pulled against the Caps. Fleury is 7-3-0, 2.91, .913 in ten career games against the Caps. However, those three losses have come this year, and he has a 5.55 GAA and .846 save percentage to go along with the losses.

Crosby has five points in three games against the Caps this year, but he is also a minus-6 in those games. It is a significant drop in performance from his 7-12-19, +7 performance in his previous 11 games against the Caps. However, he’ll be coming into this game on a five-game scoring streak (3-5-8, +1). Only one of those games was played since his appearance in Washington on February 22nd, owing to a groin injury. Since this will be the first contest Crosby will have played against the Caps since Don Cherry’s turd-burning moment, one should expect Crosby to bring his A-game.

If the Penguins were to win this game, it would give Dan Bylsma the best first-ten games record in Penguin history (Herb Brooks went 7-2-1 in the 2000-2001 season). If the Caps were to win, they’d have that first-ever season sweep of the Penguins. Wanna guess which one we think is going to happen?