The Peerless Prognosticator is ON THE AIR!!! -- Game 70: Capitals at Penguins, March 12th

The Washington Capitals embark on their penultimate road trip of the season this week, and where better to start it than a trip to Pittsburgh to take on the Penguins?  Tuesday’s meetings of the clubs will be the fourth and final meeting of the regular season.  In the three games to date, the Caps have a 1-1-1 record, all three games settled by a single goal.  If history is a guide, the game in Pittsburgh will feature wide open offense.  In the last six games in Steel City, the winning team had six or more goals four times (the Penguins in each instance), and the teams combined for 55 goals, the Pens enjoying a 31-24 margin.

If the Caps are going to end this trend, this club seems best positioned to do it, going into the contest on a seven-game winning streak and allowing only 14 goals in the process.  Meanwhile, Pittsburgh is slowly cementing their place in the postseason.  The Pens are 5-1-1 in their last seven games, including a win over the Boston Bruins on Sunday night that ended the Bruins’ points streak at 19 games, pushing them into third place in the Metropolitan Division and four points clear of the ninth-place Montreal Canadiens in the Eastern Conference playoff race.

Pittsburgh has been a good, if not especially dominant team on home ice this season.  They are one of 11 teams with 20 wins on home ice, but their 20-12-2 record is tied for 12th in standing points earned with four other teams.  The 117 goals scored on home ice ranks ninth in the league.  Of that goal total, Jake Guentzel has 18, far and away the leading goal scorer for the club on home ice this season (five more than Phil Kessel).  He certainly has a knack for finding the back of the net, dating back to his days at the University of Nebraska-Omaha, where he posted 42 goals in 108 games over three seasons.  He moved up to record 23 goals in 44 games over two seasons with the Wilkes-Barre/Scranton Penguins in the AHL.

Guentzel has not missed a beat with the big club, putting up 72 goals in 191 games over three seasons.  His 34 goals this season shattered the career-best he recorded last season (22).  He has been clutch, too, posting another 23 goals in only 37 postseason games with the Pens, seven of those being game-winners.  He will bear watching in this games, since the Pens are 9-2-2 in the 13 games in which he scored a goal on home ice this season.  That includes a pair of goals against the Caps in a 7-6 overtime win in the Pens’ season opener on October 4th.  Guentzel is 2-4-6, even, in eight career games against Washington.

Injuries have plagued the Penguin defense this season.  Of the 69 games played by Pittsburgh to date, only three defensemen have dressed for 60 or more games, and only one – Jack Johnson – has dressed for all of them.  Johnson is among the more controversial free agent signings in recent years, if by “controversial,” one means “what were they thinking?”  What would possess a team to sign a 31-year old defenseman to a five-year/$16.25 million contract, coming off an 11-point season (in 77 games) with a career plus-minus rating of minus-109 and iffy performance metrics?  Surely, Pens fans had issues with the deal.

One thing that Johnson could provide, and has provided, is durability.  In each of his first 11 seasons he averaged more than 20 minutes per game and more than 23 minutes per game in the 711 games in which he appeared.  Last season, his last of seven seasons with the Columbus Blue Jackets, was the first in which he dipped below 20 minutes per game (19:33).  But he remains a comparatively weak possession player, continuing an uninterrupted string of seasons in his NHL career under 50 percent in shot attempts-for percentage at even strength and in minus relative Corsi-for at even strength for the 12th time in 13 seasons.   And, his plus-minus at the game-to-game level is a confirming indicator of success in that the results are unsurprising.  Pittsburgh is 20-0-2 in the 22 games in which he was a plus player, 3-15-4 in the 22 games in which he was a minus player.  Johnson is 5-9-14, minus-4, in 27 career games against the Caps.

Matt Murray fits squarely in the middle of the rankings of NHL goaltenders this season.  His 2.77 goals against average ranks 17th among 35 goalies with at least 1,750 minutes played, and his .917 save percentage ranks ninth in that group.  Those numbers square with his career 2.63 goals against average and his .917 save percentage.  But he has had his ups and down.  Six times in 38 appearances he allowed five or more goals, while 11 times he has allowed one or fewer, including four shutouts that ties a career high.

If Murray gets the call for this game, it will be his 150th NHL game, and he will become the eighth goaltender in Penguin history to reach that mark.  He already ranks fourth on the all-time franchise list in wins (91), despite this being only his fourth season with the club.  That .917 career save percentage ranks first in franchise history among Penguin goalies with at least 50 games played, and his 2.63 goals against average ranks third in that group, behind Marc-Andre Fleury (2.58) and Brent Johnson (2.61).  Murray has been hot over the last month, going 8-2-2, 2.37, .932, with one shutout in 12 appearances.  On the other hand, his home record this season leaves something to be desired.  He is 10-8-0, 3.26, .902, with two shutouts on home ice this season.  In ten career appearances against the Capitals, Murray is 6-4-0, 3.62, .885. 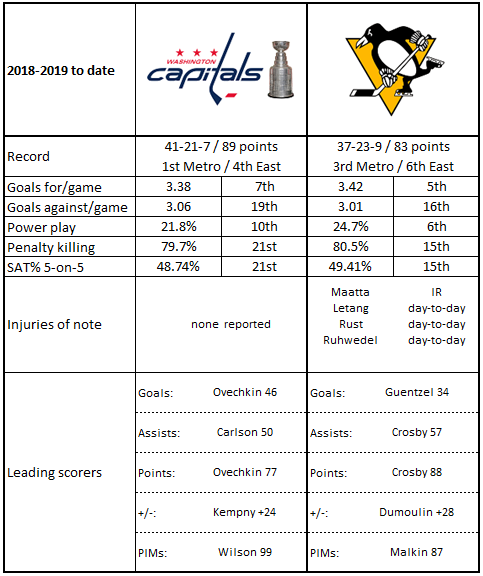 1.  Pittsburgh has had some odd struggles with numbers at home.  The 106 goals allowed is sixth-most on home ice this season, and they have been out-shot at home, 1168-1117.

4.  Has Pittsburgh become a “heavy” team, or are they getting the benefit of generous hometown scoring?  Whether one or the other, they have been credited with 1,163 hits this season on home ice, most in the league, and by a wide margin (Vegas has 1,101 in one more game played).

1.  The Caps have 11 decisions by one goal on the road this season, tied for fifth-fewest in the league.  They are 9-0-2 in those games, including a 7-6 overtime loss to the Pens in October.  They are one of four teams this season not to have lost a one-goal decision in regulation on the road.

2.  Washington could stand to be tighter with the puck on the road.  They have been charged with 377 giveaways away from home, second-highest total in the league (Florida: 399).

3.  Only Tampa Bay has a better shooting percentage on the road this season (11.0 percent) than the Caps (10.9 percent).

4.  Only Los Angeles and Dallas have had fewer power play chances in road games (84 apiece) than the Caps this season (85).

Phil Kessel is one of the top goal scorers of his era.  Since he came into the league in the 2006-2007 season, he is one of ten players with 350 or more goals, tied for ninth on the list with Chicago’s Patrick Kane (352).  Only three players over that span have more seasons with at least 30 goals than Kessel (six): Alex Ovechkin (13), Sidney Crosby (eight), and Jarome Iginla (seven).  The odd part of all of that goal scoring prowess is that Kessel has never had a 40-goal season, hitting 37 goals twice, in 2011-2012 and in 2013-2014, both with Toronto.  The strangeness extends to his stay in Pittsburgh.  He is on a pace to finish this season with 26 goals, which would make three seasons in four that he did not reach the 30-goal mark.

But dig a bit deeper into those numbers.  What he has sacrificed in his goal totals, he has more than made up for in his power play assists.  His next power play helper will be his 20th this season and would give him three straight seasons with 20 or more power play assists.  Before that streak, he never had more than 17 power play assists in 10 seasons.  That puts him in a position to finish the season with at least 70 points (he has 68), which would be the fifth time he topped that number and the third with the Penguins.  He has had some problems lately, though, going 1-10-11, minus-8, over his last 18 games.  When he scored a goal against Columbus last Thursday, it snapped a 16-game streak without a goal.  Kessel is 11-21-32, minus-7, in 46 career games against the Capitals.

There is something else to consider over the arc of his career as the season is winding down.  Holtby is unbeaten in four decisions in March so far.  He has stopped 94 of 100 shots, that .940 save percentage being his best March of his career since his first season (.962 in six games) and a considerable improvement over the .897 save percentage he posted last March, the worst of his career.  It is part of a longer run of solid play for Holtby, who is 8-4-1, 2.31, .925, with one shutout over his last 13 appearances.  He could use some of that high-end performance in this game.  The Pens are the only team in the league against which Holtby has suffered ten regular season losses in regulation.  He is 9-10-3, 2.96, .911, with two shutouts in 23 career games against Pittsburgh.

We should be long past the whole “Ovechkin vs. Crosby” angle in this series, but that is always going to be the headline theme as long as Alex Ovechkin and Sidney Crosby skate for these teams.  But so often, these contests, both in the regular season and in the playoffs, turn on the efforts of the support players.  Consider that over the last two seasons, John Carlson is tied with Ovechkin for the team lead in points against Pittsburgh (seven), and even as an unlikely a source as defenseman Christian Djoos is tied for fifth on the team in points against the Pens (four).  On the other side, one should not overlook those such as Patric Hornqvist (five points), Bryan Rust (four) or Justin Schultz (three) in the seven games played between the teams.  Winning is a team effort in which the stars shine, but also a product of contributions up and down the roster.  Both of these teams share that trait.  It is one of the things that makes this rivalry so compelling.