Well, it is after Labor Day, and that means we are getting tantalizingly close to the start of another NHL season. It also means the start of our annual previews of the Washington Capitals.  We start with the forwards and one who will likely be absent when the curtain rises on the season. 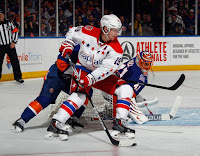 “No one is an artist unless he carries his picture in his head before painting it, and is sure of his method and composition.”
-- Claude Monet

By any reasonable measure, Nicklas Backstrom is an elite playmaker and arguably one of the best playmakers in the modern era of hockey.  He is also among its most consistent scorers overall.  In his eight seasons in the NHL Backstrom has 572 points in 577 games.  His 0.99 points per game ranks tenth overall among players with at least300 games played since he came into the league.

Last season, Backstrom led the league in assists (60) and managed 78 points in 82 games.  The 82 games played was the sixth time in eight seasons that he appeared in every regular season game.  What made last season’s total impressive was that he did it despite a hip injury that started giving him trouble in the middle of the season.  It was one that would require surgery to correct.

In retrospect, there were some telltale signs that something was not quite right with Backstrom.  In his first 60 games he was 18-46-64 and only went as many as three straight games without a point once.  However, in his last 22 games he was 0-14-14 and had two three-game streaks without a point.  His shooting frequency dropped, accounting in part for that lack of goal scoring, averaging only 1.27 shots per game in his last 22 contests after averaging 2.08 shots per game in his first 60 contests.

The hip injury is a concern, of course, and this team has enough depth so that rushing Backstrom back into the lineup should not be something to worry about...too much.  One might be more concerned about after effects of Backstrom’s game was predicated on speed or slipperiness.  It is not.  Backstrom is one of the most adept players in the league at bending the pace of a game in the offensive end to his speed.  His is a style that emphasizes vision, anticipation, and soft hands more than stickhandling and fast-breaking up ice.  If there is any aspect of his game in which there might be an accommodation, at least at first as he returns to the lineup, it might be in penalty killing,  He averaged about a minute per game in those situations last season.

The part of Backstrom’s game that gets comparatively little attention is where he absence might be felt most – defense.  It was something that got then new head coach Barry Trotz’ attention early last season.  It might be here where any mobility issues with respect to Backstrom’s hip injury and recuperation might be seen most clearly.  Backstrom has also made himself into an accomplished faceoff performer.  While he was once a weak in this are, Backstrom finished last season with a 53.6 percent winning percentage, the best of his career, and a 55.3 percent winning percentage at 5-on-5, also a career best.

In his first three postseasons with the Caps, Backstrom was 12-18-30, plus-13, in 28 games.  In his last four postseasons, he is 6-15-21, minus-3, in 43 games.  Part of that is perhaps injury (hand in 2011, concussion in 2012, hip last season), but the lack of production has been a factor in the Capitals’ winning only three of their seven series over their last four appearances in the playoffs and not advancing past the second round.  It is not too much to say that it is not how Backstrom starts the season that will be important as much as it is how he finishes it.  He has to produce at a level more closely associated with his consistent scoring over the regular seasons of his career if the Caps are going to go deep in the postseason.

The Big Question… How long can the Caps afford to have Backstrom on the shelf?

Neither he, nor apparently the team, wants to rush his return to the lineup.  He is skating, but he said that “I’m not in a rush.  I’m going to be back to 100 percent before I start playing. I’m not going to play on 90 percent."   The Caps do not have a lot of experience in going without Backstrom; he has missed just 45 games over his eight-year career, 40 of those coming when he suffered a concussion in the 2011-2012 season.  The Caps are 22-17-6 in the 45 career games Backstrom missed, but that includes a 18-16-6 record in the extended absence in the 2011-2012 season.   His absence will test the Caps’ depth early.

He will bear watching when he comes back.  In eight seasons, Backstrom’s “20-game” scoring line is a combined 34-116-150, a little behind his near point-a-game pace for his career (a 17-59-76 scoring pace per 82 games), but he has more than 20 points in his first 20 games of the year in four of his last six seasons.  His history, particularly his recent history, has been to hit the ground running when he takes the ice.  The Caps have ten games in October.  One hopes that is the outer limit of time missed as he completes his recuperation.

Last year at this time, we said…

“As much as Alex Ovechkin, Nicklas Backstrom is the indispensable Capital.  There is no substitute for him anywhere in the Capitals system.”

This year, the Caps might have a player to assume the first line center responsibilities in Evgeny Kuznetsov, but one has to think that he lacks enough experience to perform those duties on a par with Backstrom.  It could make for a bumpy start for the Caps as Kuznetsov and Andre Burakovsky each move up a rung on the Caps ladder at center.

Given the nature of Backstrom’s game and his ability to put others (most notably Alex Ovechkin) in a better position to finish plays, the effects of the absence could be significant.  At 5-on-5 last season, Ovechkin’s Corsi-for with Backstrom was 54.3 percent, 50.0 percent without him.  With Evgeny Kuznetsov it was 47.1 percent when together, 54.2 when apart from Kuznetsov.  With Burakovsky those numbers are 54.4 percent when together, 53.4 percent when apart (numbers from stats.hockeyanalysis.com).

Backstrom’s absence will place a burden on the young centers Kuznetsov and Burakovsky to take a large step forward in their respective games, to put more colors in their respective palettes.  Backstrom, on the other hand, is an accomplished artist whose gifts might be better appreciated in his absence and for which the Caps and their fans will be more grateful upon his return.