Washington Capitals: A Lesson in "Grabithmetic"

“Now that development camp is over and Karl Alzner has been signed to a four-year contract extension worth $11.2 million, the Washington Capitals’ front office can turn its attention to its final restricted free agent not yet under contract: Marcus Johansson.”

A little background.  Marcus Johansson was draft-eligible in 2009, where he was ranked as what appeared to be a high-second round draft pick – 33rd by TSN.ca, 30th by The Hockey News, and the 8th ranked European skater by Central Scouting.  He was taken 24th overall by the Capitals in the draft and was described by Capitals’ general manager George McPhee this way…


McPhee also noted that he loved the way Johansson played in the World Junior Championships against Team Canada, that “in the final, in a real hostile environment, 20,000 Canadian fans going crazy, some of the Swedish kids didn't show up. He showed up and played hard."

Fast forward to today.  Among his cohort of three-year veterans playing over the last three seasons, Johansson is one of just 12 skaters with at least 33 goals and at least 95 points (both being Johansson’s career totals to date).  He will turn 23 years old a few days after the start of the 2013-2014 season.

Silence is what the Caps do when it comes to the machinations of roster management.  Contracts are not leaked until they are announced, whether it is for their own players they are extending or free agents in whom the club has an interest.

And that brings us to the subject: Grabithmetic.  The Capitals are on record as being disinclined to signing unrestricted free agents…

“We made a lot of our moves in the season.  So we wouldn’t be in a position where we would have to go out and sign free agents. It just gets too expensive, too long [contract terms], and you don’t know those players as well as you know your own players.”


That has not kept others from speculating on the goodness of fit between still unrestricted free agent center Mikhail Grablovski and the Caps.  On its face, it makes sense.  The Caps need a second-line center (again), and Grabovski would appear to be a guy who could fill the bill.

Let us make some assumptions.  First, let us assume that the Capitals will carry a 23-man roster comprised of 13 forwards, eight defensemen, and two goaltenders.  That roster might look like the following (less Johansson): 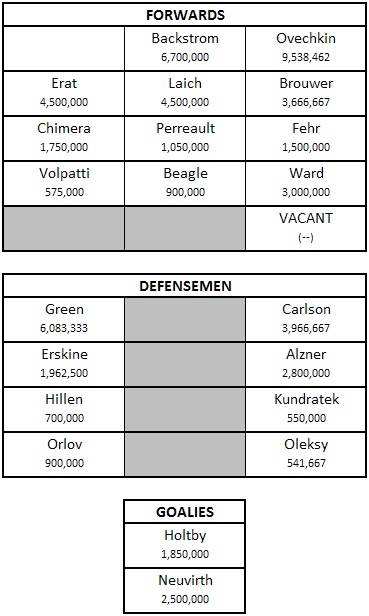 Note that only 21 spots are encumbered with a salary cap hit of $59,234,295.  This leaves $4,925,705 (net of bonuses, according to capgeek.com) in cap room to re-sign Johansson and, if you have read this far, coax Mikhail Grabovski to sign on the dotted line.

The Grabithmetic will not permit this.  Signing Grabovski at a presumed market price of $5 million puts the Caps over the salary cap and would not allow them to extend Johansson at any price.  You can tinker with roster size, but you are probably tinkering on the margins of the defense.  You might not have Steven Oleksy or Dmitry Orlov on the parent roster.  Executing either of those roster moves still would not permit signing both Johansson and Grabovski (and you no doubt noted by now that we have not even entertained prospect Tom Wilson making the parent roster).

You could reasonable argue that the matters of Grabovski and Johansson are not related.  Perhaps not directly, but they are in the sense that you have a fixed resource -- salary cap room -- to distribute.  Every dollar paid to Johansson is a dollar not available to sign Grabovski.  It is true that Johansson presents a unque set of circumstances, none of which seem favorable to him.  As a restricted free agent with a qualifying offer on the table, he has next to no leverage of his own.  But still, $850,500, if that is the amount for which he signs, then gets swept under that fixed sum, and there would be barely $4 million in cap room to sign Grabovski.

If it takes somewhere in the neighborhood of $5 million to secure Grabovski's services, how do you get there?  Signing Johansson at the qualifying offer leaves $4,055,205 in cap room.  Let us start improving this number by making the marginal move on defense and sending Dmitry Orlov to Hershey.  Sorry kid, but that’s $900,000 in cap savings.  Now we have $4,955,205 to work with.  If that $5 million for Grabovski is still a reasonable number, we are left with having to make more moves, if only to give the Caps a small measure of flexibility to do other things (and remember, there might be an Evgeny Kuznetsov appearing late in the season).

This is where a certain dexterity enters the equation.  The Caps might have to decide whether or not to move unpleasant contracts.  Paying $3 million for a player who might be a fourth liner comes to mind.  Or perhaps moving a forward occupying $1.875 million in cap space after a three-goal season.  Then again, is Johansson a trading asset in this instance?

Grabithmetic involves variables – players and money.  But more important, it is not just about addition.  It is about subtraction.  If Grabovski is coming to the Caps, chances are someone is leaving.

Posted by The Peerless at 5:32 PM No comments: