For those of you with a political commentary bent, you are probably familiar with the commentary of E.J. Dionne of the Washington Post.

In this silliest of seasons in which the Republic is desperately trying to figure out who shall stand as the major parties' candidates for its highest office, E.J. takes a turn down another road in his "Precinct" discussion at the Post. He forms his thesis in a question...

To wit..."Is baseball the best sport?"

The baseball season dawns, a great thing for many of us. I disgree with my colleague George Will on many questions, but I love his baseball writing and his partisanship on behalf of the sport. "Baseball, which provides satisfying finality and then does it again the next day, is a severe meritocracy that illustrates the axiom that there is very little difference between men but that difference makes a big difference," he writes in a delightful column on the new season. (By the way, is that a conservative thought?) It's a risky question while so many are watching the Final Four -- though the four consist of four No. 1 seeds. (Is that a bad thing?) So please grapple with any of the questions offered in the course of this post, and the basic one: Is baseball the best sport?

Once upon a time, I would have answered in the affirmative. Baseball -- in its purest form -- is a remarkable combination of individual and group activity. A unique example of some of the most difficult skills to master in all of sport played at a leisurely pace that invites contemplation and reflection.

But that was then...

It still draws many -- millions, in fact -- to the stands, but perhaps more out of a sense of its grand history that its scandalized present.

Skill? Hitting a round ball with a round bat, squarely, might yet be -- as Ted Williams professed -- the hardest single thing to do in sports. But we'd be hard to convince that the average major league baseball player is a superior athlete to the average NHL hockey player. While baseball requires superior hand-eye coordination, reflexes, speed and quickness, and occasionally strength, hockey requires these magnified. To that add "anticipation." Whether one thinks of it as "vision" or "hockey sense," the ability to think ahead quickly separates the hockey player from the baseball player.

There is the game itself. Both are played in the context of ever-changing geometries...the curve of a pitch, the ball played off the wall...a one-timer, the angling of a skater off the puck. But hockey is played at such a ferocious pace compared to that of baseball. Even in its slower moments, the pace of the action dazzles compared to the every-fifteen-seconds of action pace of baseball.

There is the aura of mystery that surrounds baseball that is more pretentious than it would admit. "Seamheads" who can spout obscure statistics as measures of a player's or team's effectiveness..."on-base plus slugging percentage"..."batting average with runners in scoring position after the sixth inning"..."quality starts"...the whole "Sabermetric" fog that separates the "real" baseball fan from the great unwashed. It has the clarity of pudding and divides its fans into the knowledgable and the not so.

Hockey is more egalitarian (although it is seems to be moving into its own "Sabermetric" dimension). Even the most casual fan can appreciate a big hit, an end-to-end rush, a cross-ice pass.

Once upon a time, baseball had personality. Dizzy, Pee Wee, Three-Finger, Big Train, The Scooter. It had players that dazzled on the field -- and off -- and did so leaving their own imprint of character (and they certainly were characters). These days? Players that aren't finding themselves as the subject of lurid tabloid stories suffer a cookie-cutter sameness...Alex Rodriguez is a sublime talent, and is (well, maybe) a pillar of the baseball community, but he has all the programmed personality of an animatronic display.

Hockey still has its odd balls. Goalies as a class could probably qualify (ok, you go stand in front of a net throwing yourself in front of 100-mile-an-hour pucks).

You, no doubt, could think of a dozen reasons why hockey is better. We'll boil it down to one. Baseball is the best sport one day a year -- Opening Day. Hockey has the Stanley Cup tournament...two months of unrelenting suspense and drama.

Case closed.
Posted by The Peerless at 3:05 PM 1 comment:

Take Me Out to the Ball Game... 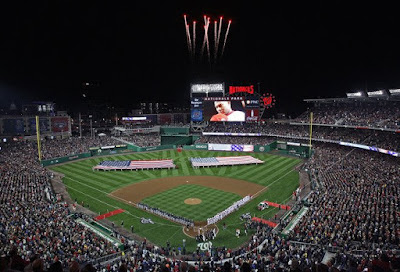 Yesterday being a day without Caps hockey, The Peerless had a ticket to the Nationals’ home opener at Nationals [Corporate Name to be Selected Later] Park.

And what a nice park it is.

It does not have the instant charm of a Camden Yards with its distinctive warehouse façade looming in right field, or the scenic panoramas of PNC Park in Pittsburgh or AT&T Park in San Francisco.

But this is a ballpark that will age nicely and take its place in the roster of monuments this city has to offer.

We took Metro – the local subway provider – which was pretty much a given, given the predictions of the apocalypse with respect to close-in parking. The trip was pleasant – a train largely filled with Nats fans, even if it was several hours before the scheduled first pitch.

Upon exiting the train at the Navy Yard station – the closest to the ball park – the process of getting out of the station (which can be a chore even on a rush hour weekday) went as smoothly as one could hope, although the same might not be said of those in the escalator next to the one that I was riding, which was shut down in mid-transit, requiring a decent walk up the stairs.

The exit at Half Street (honest, there is a “Half Street”) was rather packed. For a moment, I thought of the “hot gates” of the movie, “300,” where hordes were funneled into a tight aperture of a path. But things went relatively smoothly, even when we arrived at the center field gate, where security was in force in anticipation of the arrival of the President for the inaugural “first pitch.”

The visual impression of the ball park was certainly not unusual for anyone who has been to Camden Yards, especially as one enters from the north end of Eutaw Street at that ball park. A pavilion empties into the lower seating bowl and playing field that are both below street level. It creates a sense of openness that one could never achieve in the multi-tiered donut of RFK Stadium. If anything, it reminded us a little bit of the Citizens Bank Park in Philadelphia, although Nationals Park is even more open in its concourses.

The concourses are wide, if oddly angled in places. The concession stands are numerous, although some could use additional space (the lines at Ben’s Chili Bowl and Five Guys were extraordinarily long, for example, even hours before the first pitch). For the record, we sampled the chili dog at the Hard Times Café. We’ll give it “three stars” (the bun didn’t hold up very well to the chili).

We were in the stadium long enough before the first pitch to be able to tour the entire circuit around each level. It has something of the look of an unfinished ballpark (especially the rest rooms, for some reason…maybe it was the concrete flooring), but not so much as we might have anticipated. The concourses provide fans with the chance to keep up with the action as they are largely open to the field, another significant departure from RFK. And, the concourses provide quite a panorama of DC, as one looks out from the stadium, from just about any vantage in the ball park. It isn’t a bad place to just take a stroll and look across the city, especially from the upper level.

Entering the seating area (our seats were in the 400-level), there was that sense of openness, but also one of being rather close to the action. The upper deck seems higher than RFK (owing to the suites below), but not so much that one feels detached from the action. But the attention-grabber was the scoreboard. It is all it was represented as being, in all its high-definition grandeur. In fact, it became a bit of a distraction at times, as one might have been drawn to it and away from the action on the field. As time goes on, we suspect this temptation will subside.

The seats were comfortable, as such things go, wide enough for those of us of a certain age (and gravity-challenged physique), and angled to the action on the field. The only problem was not architectural, but climatological – it was cold. Temperatures were in the 40’s, and there was a bit of a breeze up top, which made the choice of hooded sweat-shirt and gloves a wise one.

We will not belabor the details of the game, which you no doubt have already read or heard about. The President threw out the first pitch – a fitting occurrence, no matter one’s opinion of his tenure. The teams struggled with the offensive aspects of the game, and when things reached their climax, Ryan Zimmerman’s walk-off home run was a fitting end to the inaugural game. 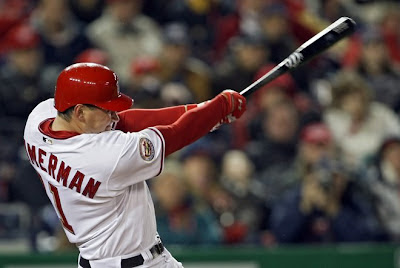 This being a “late” game (an 8:15 start), Metro seemed to have caught a break. Since this is, after all, Washington, the stands started emptying around the sixth inning as folks tried to beat traffic in anticipation of the work day the following day. So, by the time the game ended, just after 11:00 pm, the stadium was probably filled by what was more likely the sort of crowd that will be more common. Good thing…as fans filed out of the center field gate, they were funneled into that Half Street pass, which made the half-block walk to the Navy Yard station rather slow. Slow though it was, it moved steadily, and once at the station, it was of little problem to get through the fare gates and to the trains (would that a rush hour experience be as smooth on a regular basis). The trains were moved along – as one filled and left the station, another took its place. Generally, at least from our experience, Metro passed this test rather well.

The test of the ball park isn’t Opening Night – all ball parks look like palaces in that first blush of a first-ever game. And what glitches there were seem less “systemic” than merely a result of the “newness” of the ball park, where people have to find the game-day routines that work for them. The test will be in May…and June…and July, when that first blush wears off. But we think this ballpark will fare quite well in that regard. The Nats have hit a home run with Nationals Park.
photos: Drew Hallowell/Getty Images
Posted by The Peerless at 9:31 AM 3 comments: