Washington Capitals: A Brief History of Winning Games 1 and 2 on the Road 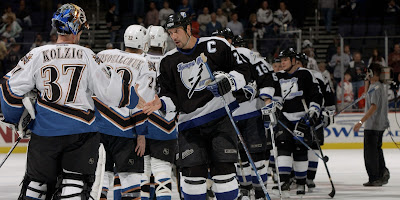 The Washington Capitals have had a difficulty history in the postseason, as even the most casual Caps fan knows.  One of the noteworthy facts of that history is what happens in Games 1 and 2, and what follows.  More to the specific point, now that the Caps have won Games 1 and 2 in their conference final series against Tampa Bay, what does history have to say, if anything, about that development?

As it turns out, not much.  But even a limited history suggests that there could be a test lurking on home ice in this series.  Coming into this season, Washington won Games 1 and 2 of a best-of-seven series eight times in team history.  Oddly enough, the first time they did so had to wait until 1992, when they defeated the Pittsburgh Penguins in Games 1 and 2 on home ice before dropping the series in seven games.

The wins in Games 1 and 2 in this series against Tampa marked the third time in team history that the Caps swept the opening games of a best-of-seven series on the road.  The first time was in 1996 against the Penguins, and the other instance was against the Lightning in 2003.  Both series later featured something one would hope to be avoided this year – a multi-overtime game.

In 1996, the Caps and the Penguins needed four overtimes to settle Game 4 at USAirways Arena in Landover, MD.  It was a game that the Caps led, 2-1, after two periods, but Petr Nedved scored a power play goal eight minutes into the third period to tie the game, and Nedved ended the contest with only six seconds remaining on a Penguin power play and only 45 seconds left in the fourth overtime.  At the time, it was the third-longest game ever played in the NHL postseason and the longest since the Detroit Red Wings and Montreal Maroons needed 116:30 of extra time before the Red Wings won, 1-0, in the Stanley Cup semifinal in 1936.  Pittsburgh went on to win the 1996 series against the Caps in six games, three of the Caps’ losses coming on home ice, two of them (including the series-clincher) by one goal, one of them that four-overtime gut punch.

The other instance in 2003 featured a multi-overtime game that was all-too-similar to the 1996 marathon against the Penguins.  The Caps and Lightning had already played an overtime game on the MCI Center ice sheet, the Lightning winning Game 3 of the Eastern Conference quarterfinals, 4-3, less than three minutes into overtime after the Caps tied the game, 3-3, late in regulation on a goal by Brendan Witt.  The Lightning won Game 4 at MCI Center and then Game 5 in Tampa before returning to Washington for Game 6 with a 3-2 series lead.  On Easter Sunday, April 20th, the Caps once more took a lead into the third period.  And once more, they allowed a third period power play goal (this one by Dave Andreychuk) to tie the game late in regulation.  The teams fought to a draw through two overtimes, but early in the third period, Jason Doig was a bit too eager to get onto the ice  and into the play before a teammate got off, and the Capitals were hit with a too-many-men penalty.  Martin St. Louis ended the game, the series, and the Caps’ season 4:03 into the third overtime.

There might be an extra-time game lurking in this series in which the Caps have opened with two wins on the road.  If this team is different, and they are presented with such a test, it would serve them well to write a different chapter in the team’s history in such games, one that does not involve failing to hold a third period lead, allowing a power play goal to tie the game in regulation, and then losing deep into overtime on another power play.  Tend to business, close them down, wrap things up.