Scenes from a Sunday

We took in the Sunday matinee practice at Kettler. Tomas Fleischmann donned the yellow jersey which meant he had the ice to himself for some skating and conditioning action, and he will be today's leader in the Tour de France bicycle race.

Eric Fehr skated in a green jersey this afternoon, so he seems to be progressing to the point where he's close to seeing real live action.

Michael Nylander also wore a green jersey, because as we all know, "green means..."

We got one last glimpse of Joe Finley heading over to the locker room (he was among the players designated for Hershey today), and yes, he is a very large young man, even without the benefit of pads and the added inches of a pair of skates.

And here are some images of the action... 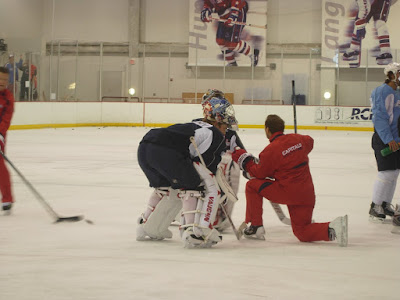 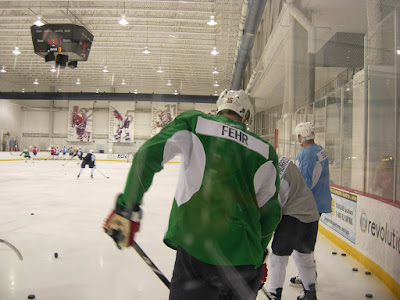 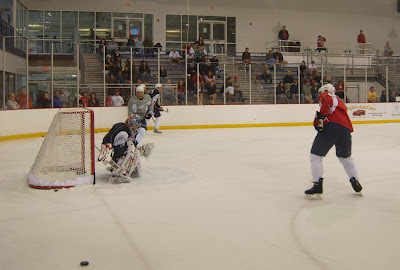 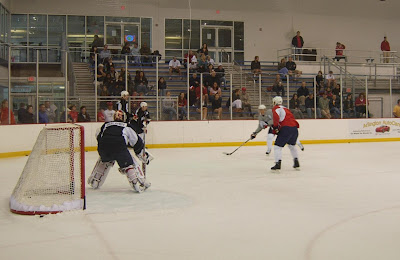 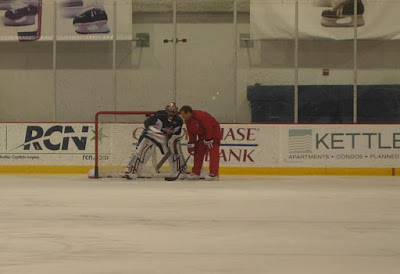 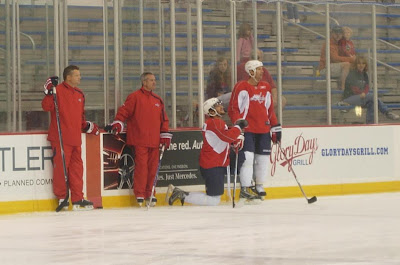 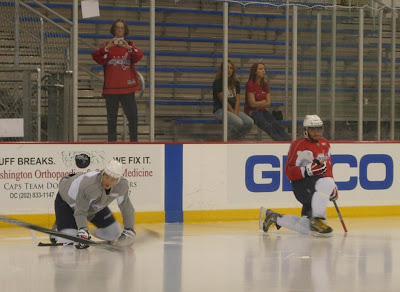 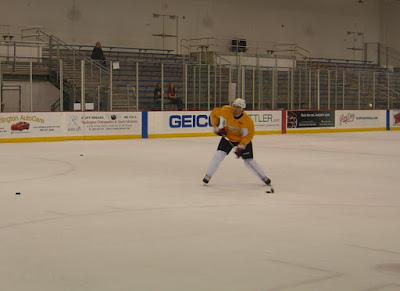 Posted by The Peerless at 1:52 PM No comments: 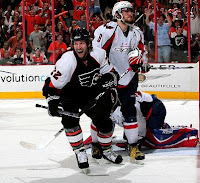 Theme: “Opportunity is missed by most people because it is dressed in overalls and looks like work.”

Thomas Alva Edison was the holder of more than 1,000 U.S. patents… and the author of that quote above. He might be said to be a person who knows the value of hard work and its relationship to opportunity. And the merging of hard work and opportunity is what brings Mike Knuble to the Capitals. On a team that can score the fancy goal, the spellbinding goal, the breathtaking goal, there wasn’t enough of the ugly goal last year to push the Caps past the second round of the playoffs and toward a Stanley Cup.

And here is another thing Knuble will help (as if it needed it) – the power play. Knuble is 66-66-132 on the power play for his career. But 49 of those 66 goals have been scored in the last four years (all with Philadelphia). A top power play of Knuble, Ovechkin, Nicklas Backstrom, Alexander Semin, and Mike Green might be the scariest power play in recent memory. But here is what a top power play like that does. It might bump Brooks Laich to the second unit, but Laich himself was 9-15-24 on the extra man advantage last year. The second unit will pose its own problems for penalty killers.

Knuble has had something of an odd journey in his career. He has played in 12 seasons, but his career breaks down into two pieces. In his first six seasons, he averaged 59 games a year and never finished a season with more than 15 minutes of average ice time a night. In those six seasons he scored a total of only 50 goals. In the last half dozen seasons of his career, he’s averaged 78 games a year (he’s played in all 82 four times) and never finished any of those seasons playing less than 15 minutes a night. And, he’s averaged 28 goals a season over that span.

Fearless: Here’s another interesting number from those last half dozen years – 21. That’s the number of goals Knuble has scored against Pittsburgh in 37 games (a 47-goal full-year pace). He also has 16 game-winning goals in the last four years with the Flyers (three against the Penguins).

Cheerless: Uh-huh. And did you know that Knuble had six goals in 24 games (covering three playoff years) for the Flyers in the playoffs and only two of those (in 11 games) against the Penguins, both series that the Flyers lost?

Knuble could be one of the great bargains of 2009 free agency. A player with relatively low mileage, given his early career history, who fills a specific need for the Caps – more scoring from in close. On the other hand (and this is required for a Caps fan – pessimism), Knuble is 37 years old and has not had the brightest of playoff histories.

If the Caps were a picture last year, they’d have been the heartthrob GQ kind of portrait… young, clean shaven, buff, dreamy (we’re supposing as to the last). With the addition of Knuble to a team that has a Chris Clark and a Brooks Laich, the club takes on some sandpapery stubble and wears a hard hat a little more often. It was something the Penguins added in Chris Kunitz and Bill Guerin last year. It was something the Detroit Red Wings had (and have) in Tomas Holmstrom in 2008. It was up and down the lineup for Anaheim in 2007. Even Carolina added a Mark Recchi and a Cory Stillman to Rod Brind’Amour in 2006. These are guys who know how to play in tight quarters, who might score a pretty goal once every leap year.

And here is how Knuble can contribute in that regard. In scoring 27 goals last year for Philadelphia, he did so from an average distance of 17 feet. Coincidentally, 17 of his 27 goals were scored from 15 feet and closer. Six of those were tip-ins.

And let’s take that contribution thing one step further. Knuble scored goals in 23 games for the Flyers last year (he had four two-goal games). In those 23 games, the Flyers had a record of 18-5-0. One would think his goal scoring with the Caps – added to that of the likes of Alex Ovechkin and Alexander Semin – would yield similar, if not better, results this year.

Well, this isn’t a leap year, so we won’t expect Knuble to get a pretty goal. But the Caps have an opportunity to make it special nonetheless. And Mike Knuble’s brand of hard-work hockey might be just the thing to allow them to take advantage of it.

Your leaders in the early preseason clubhouse…

Brian Pothier – 1
Mathieu Perreault – 1
Posted by The Peerless at 8:46 AM No comments: 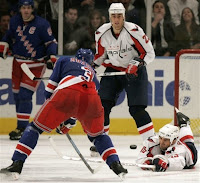 Theme: “The superior man is slow in his words and earnest in his conduct.”

Confucius said that. No… really. And if there was a player who gave the impression of being earnest, it would be Boyd Gordon. It’s hard to believe that Gordon is still only 25 years old (he’ll turn 26 in October); it seems as if he’s been here since the first time the Caps wore red, white, and blue. A player of some offensive achievement in juniors (33 goals in 56 games in his last year at Red Deer), he has been a checking/defensive forward in his five seasons with the Caps.

In keeping with the puck possession theme, Gordon had by far the fewest giveaways of any forward for the Caps playing in at least 50 games (14). Only 15 centers in the entire league had fewer giveaways (50 games minimum). And, his takeaway-to-giveaway ratio of 2.29:1 was second among all Caps forwards (Eric Fehr led the club).

And if you are of a mind that you have to have those guys on the bottom half of the forward line combinations to succeed as a team, Gordon has another interesting set of numbers. In each of the last three seasons, the Caps winning percentage has been better (counting extra time losses as losses) with Gordon in the lineup than with him sitting out.

Fearless: That’s an interesting thing about Gordon’s giveaways and takeaways. Over the last three seasons, he’s only coughed up the puck a total of 46 times. That number was exceeded by five Caps forwards last year. And if you’re going to be a defensive forward relied upon to kill penalties, you probably don’t want to be a guy going to the box to often yourself to leave others to kill your penalty. Gordon was second among Caps forwards (to David Steckel) in average penalty-killing time on ice last year. He only took eight minor penalties all year. He’s taken only 21 minors in the last three years – five Caps forwards took more than that last season.

If there is an intuitive parallel to Gordon in Caps history, it might be Kelly Miller (although the former Cap was a winger). Both were/are little undersized for their respective eras (Miller was 5’11”, 185; Gordon is 6’, 201) and primarily defensive specialists. But while Miller averaged 14-22-36 over his 15 year career and did not score fewer than 30 points in any of his first nine full seasons in the NHL, Gordon has yet to have a 30-point season in any of his three full seasons with the club. Keeping with that “seasons combined” idea, Gordon has had only 30 points combined in the last two seasons.

But on a team that has such firepower on the top two forward lines, having a couple of centers who can play against another team’s top lines and kill penalties is hardly a liability. We’ve wondered in the past if Gordon has an offensive potential that hasn’t been tapped. But it’s not as if his own goalies have feared his awesome shot in the past. While there might be some upside left in his offense, expecting him to finish on the north side of ten goals or 25 points might be a stretch.

However, if Gordon can keep improving in his ability to win draws, play solid defense, and help a Capitals penalty killing squad improve (it really needs to improve on a 17th place finish last year), he’ll earn his keep. Teams than win have guys like him doing the other things -- giving an earnest effort -- that a club needs to have done.

Posted by The Peerless at 12:39 AM No comments: