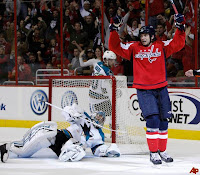 Matt Bradley
Theme: “Slump? I ain’t in no slump; I just ain’t hitting.”

Matt Bradley spent the first five years of his tenure with the Caps as an “energy” forward. That’s the short form version of a forward who hits, checks, has the occasional fight, and chips in a point or two here or there. A momentum-changer. You could argue that Bradley has fulfilled the “energy” part of the description – you would be hard pressed to find a player who seems to care less about his well-being in service to giving his team an edge. But momentum-changer…well.

It’s hard to say if the broken finger sustained against New Jersey on December 21st was the pivotal point in Bradley’s season, numbers-wise, but it certainly marks a dividing line in his production…

Bradley had an especially productive second ten-game split, recording two goals and four assists, while posting a plus-2. He skidded some after that with a goal and two assists over 14 games in his next two splits, during which he sustained the broken finger. After missing 14 games, Bradley returned and went almost silent in his last 32 games, going 1-1-2, minus-6. The drop in production came despite his getting reliable minutes. Over his first 26 games before the injured finger, he skated fewer than ten minutes 13 times (four of those involved fights, which would have depressed his ice time, and in two others he was injured). He skated fewer than ten minutes only eight times in his last 32 games (only one of those included a fight that would have reduced his available minutes).

Another area in which Bradley came up short was in game-winning goals. In 2009-2010 Bradley had five such markers, tied for second on the team with Alexander Semin and Mike Knuble. In 2010-2011 he had none. One could argue that in 2009-2010 he had almost as many game-winners (five) as he had in his entire career to that point (seven in 492 games), but it is also an indicator of how much his production dropped off. 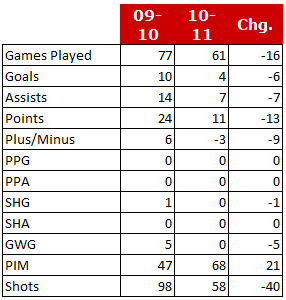 One thing Bradley has developed a reputation for is a certain fearlessness when it came to engaging in fisticuffs. Although not a heavyweight by NHL standards, he wasn’t shy about whom he took on. In 2010-2011 he was involved in ten bouts, and it is worth noting that the Caps were 7-3-0 in games in which he earned a fighting major. It is also worth noting that despite the Caps signing a true heavyweight in D.J. King to fill that role, and signing Matt Hendricks, who like Bradley was not shy about dropping the gloves with anyone who offended his sensibilities, Bradley had twice as many fights (ten) as he had in 2009-2010 (five), in which the Caps had a record of 3-1-1 (and this does not include the fighting major he drew but was not charged with when the Flyers’ Daniel Carcillo jumped him in an 8-2 win). It isn’t an easy way to make a living, but Bradley continued to make himself heard (or at least felt) in this area.

Odd Bradley Fact… Among all Caps forwards appearing in at least 20 games, Bradley faced the stiffest competition in 2010-2011 at 5-on-5; he also suffered the weakest quality of teammates (from behindthenet.ca).

Game to Remember… November 17, 2010. In a 4-2 win over Buffalo, Bradley notched a goal and an assist (his only two-point game of the season), and he led the team with five shots on goal (his best for the season). His assist came on what would be the game-winning goal scored by David Steckel.

Game to Forget… December 11, 2010. Bradley was on his first shift of the night when the Colorado Avalanche scored their first goal of the evening. He was on the ice for his last shift of the first period when Colorado scored again to break a 1-1 tie just before the first intermission. After the Avs posted a power play goal midway through the second period, Bradley skated one abbreviated shift (13 seconds) with nothing eventful, but in his next shift dropped the gloves with Cody McLeod. It did not have as much of the effect as hoped for, as the Caps dropped a 3-2 decision, with Bradley finishing minus-2 (his only minus-2 of the season), a five minute penalty for fighting, and only 6:40 in total ice time.

Post Season… Almost nothing to speak of. No points, minus-3. He was by no means alone in that sparse output, but then again, it was part of the problem, too.

In the end, Bradley suffered a significant drop in his basic numbers. He is not asked to be a critical contributor on offense, but getting so much less from him on offense – and almost nothing in the season’s last 32 games – contributed to the weakness the Caps were burdened with on the bottom two forward lines, which goes a long way in reflecting the problems the Caps had on offense in the second half of the season.

Bradley is now a free agent, and his return hinges on at least a couple of factors. First, does the team think that whatever intangibles he brings merits an offer that approximates what he made this past season ($1.0 million)? Second, do the Caps think they can get similar contributions more cheaply, say, from a player such as Jay Beagle, who is signed for considerably less than Bradley made this past season? Bradley does not have to be “The Professor” to figure out that his tenure with the Caps is on shaky ground. And that is unfortunate, because he has been a player who has offered himself up to do what he can for the club to win. You just wonder if perhaps having just turned 33, if 2010-2011 wasn’t just a slump, that the wear and tear have left the Caps with looking to go younger and Bradley with the Caps in his rear view mirror.

Email ThisBlogThis!Share to TwitterShare to FacebookShare to Pinterest
Labels: 2010-2011 by the tens, Matt Bradley, the peerless prognosticator, Washington Capitals

It might surprise more than one Caps fan to know that Jay Beagle played in 31 games this past season; 30 of the last 50 regular season games, in fact. He did most of his work in the middle of the season, playing in 21 of 22 games between December 15th and February 6th. The Caps were 10-4-7 in those games.

The 2010-2011 season was one more step on Beagle’s patient climb up the hockey ladder. Two years at Alaska-Anchorage in the Western Collegiate Hockey Association, part of a season with the Idaho Steelheads in the ECHL, three seasons with the Hershey Bears, two of which included short stints with the Caps. This season, Beagle split his time roughly in half between Hershey (34 games) and Washington (31 games). He set career bests in games, goals (two), points (three), shots, and average ice time. But what stands out, if anything, is that both of his goals this past season were game winners – December 21st against New Jersey, and again on December 28th against Montreal. Happy Holidays. His overall numbers looked like this…

Drilling down into Beagle’s numbers, there wasn’t much to get excited about. His 1.48 goals for/on ice per 60 minutes at 5-on-5 was by far the lowest on the team for forwards playing in at least 20 games. Even though his 1.90 goals against in such situations was respectable enough, the lack of offensive contributions meant that his plus/minus on ice per 60 minutes at 5-on-5 was among the worst on the teams’ forward cohort (-0.42, third worst). And the difference between his plus/minus on ice and that off ice per 60 minutes at 5-on-5 (-1.58) was worst among Caps forwards playing in at least 20 games (numbers from behindthenet.ca). Still, his numbers were generally an improvement upon last season…

Game to Remember… December 28, 2010. He recorded less than ten minutes of ice time, and he attempted only one shot on goal. But Beagle made that shot attempt count as it got past Montreal Canadiens goaltender Carey Price to open the scoring in a 3-0 Caps win in the last game before the January 1st Winter Classic game in Pittsburgh.

Game to Forget… January 14, 2011. The Caps got off to a good start against the Vancouver Canucks with a goal in the game’s sixth minute from Matt Hendricks. But less than three minutes later Beagle was on the ice when the Canucks tied the game. He was unable to catch Jannik Hansen circling behind the Caps net and could not prevent Hansen from feeding Alex Edler for the equalizer. Beagle was a victim of bad luck in a way, on what would be the Canuck’s third goal. He was headed off the ice as Jason Chimera had his pocket picked in the neutral zone, leading to a breakaway for Daniel Sedin that put the Canucks up 3-1 on their way to a 4-2 win.

Post Season… Beagle did not dress for any of the nine post-season games played by the Caps.

In the end, Beagle’s play was anonymous in its way. In 31 games he did not record a game better than plus-1 and had only two games in which he was minus-2. He was, for the most part, a player who chewed up ten minutes or so of ice time without much undue hazard to the scoreboard, either for or against. Going forward, though, the question about Beagle might be whether he can assume the “energy” forward position that has been manned by Matt Bradley (our next subject) for the past six seasons in Washington. Bradley is an unrestricted free agent coming off a deal that paid him $1.0 million a year. Beagle is signed through next season with a cap hit of $525,000.

One of the things that haunted the Caps this season was how little production they got from the third and fourth lines. Beagle has contributed about a point every other game in his career in Hershey (129 points in 211 games). Given that Beagle contributed only two goals and three points this season with the Caps, his ticket to a permanent spot on the roster might be proving whether he can at least move the needle closer to the level of production he displayed in Hershey. That is the unknown end Beagle is left to pursue.

(Photo: Lou Capozzola/Getty Images North America)
Posted by The Peerless at 8:30 AM No comments: