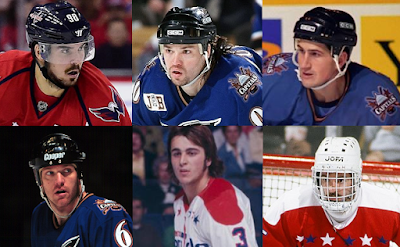 As we move through Day 58 of The Pause in the NHL, we move onward with our look back at the All-Alphabet Teams we published back in 2014.  In that year, we had to skip over an “All Team-I” because from 1974 to 2014, the Caps had only one skater whose last name began with the letter “I” – defenseman Al Iafrate.  Gary Inness was the only goaltender who would have qualified as a member of that team.

So we skipped ahead with the "All-J Team," which was as follows:

The “All-J Team” was something of an odd creature among the skaters.  It did not lack for playmaking with Marcus Johansson and Joe Juneau up front, and Calle Johansson on the back line.  In Keith Jones, it had a grinder representative of that type of player.  What it lacked was a true finisher.  Jones is the only player among the five who averaged 20 goals per 82 regular season games as a Capital, and just that.  The playoff profiles were a bit different.  Joe Juneau possesses one of the legendary “finishes” in Caps history, an overtime goal in Game 6 of the 1998 Eastern Conference final against the Buffalo Sabres (one of four game-winning goals he had of the seven goals he recorded in that postseason, two of them in overtime) that propelled the Caps to their first Stanley Cup final.  His 24 goals per 82 postseason games as a Capital is the best of this group by far (Jones averaged 13 goals per 82 playoff games).

While this is, on balance, a pretty good lineup, one wonders if one or two of the five skaters might be replaced by a player from the post-2014 period.  The short answer is, “no.”  Accounting for Johansson, who played 238 games with the Caps after the original 2014 team was published, there are three skaters who dressed for the Caps with last names beginning with “J” – winger Dmitrij Jaskin, and defensemen Nick Jensen and Jakub Jerabek.  Jaskin was in and out of the lineup, dressing for only 37 games with the Caps, going 2-6-8, minus-5.  He would not replace either Johansson or Jones on the wing.  Jerabek barely made a ripple after landing in Washington in a trade with Montreal in February 2018.  He dressed for 11 regular season games and two postseason games in the Caps’ 2018 Stanley Cup run.  He does not have a strong case to make to dent the lineup.

Nick Jensen makes the best case among the three skaters mentioned to crack the lineup.  Since coming to the Caps in a trade with Detroit in February 2019, he has dressed for 88 regular season games, posting 13 points (all assists) and averaging 17:38 in ice time per game.  But his play has been somewhat uneven.  He is tied among defensemen for the worst even-strength goal differential this season (minus-2), and his giveaways per 60 minutes (2.37, third-worst among Caps defensemen with at least ten games played) ar more than one might want to tolerate with a “puck-moving” defensemen who does not contribute a lot in the offensive end.  So no, we would not be inclined to replace Johansson or Joly with Jensen.

In goal, the decision is simpler.  There is no candidate to replace Al Jensen, none of the five goalies to dress for the Caps since 2014 having a last name starting with the letter “J.”  Even if one was to use the dodge of going with a goalie whose first name started with the letter, the choices would be limited to one – Justin Peters.  With a 3-6-1, 3.25, .881 record in 12 games with the Caps, he would not merit consideration to replace Jensen.

We are left where we started, the 2014 “All-J Team” remaining intact.  It isn’t a bad team, but it also appears to fail to take a place among the best letter teams for the Caps.  If you were thinking how far such a team might go, it looks like a playoff team, just not one built for a deep run.
Posted by The Peerless at 1:44 PM No comments: