The Peerless Prognosticator is ON THE AIR!!! -- Caps vs. Hurricanes, October 27th

Capitals are on the road this week with games in Carolina and Minnesota tonight and tomorrow, then off to Calgary to face the Flames on Saturday. Tonight will be the first meeting of these Southeast Division rivals this season, the Caps with a 69-44-14-5 record over all in the series. Since the establishment of the Southeast Division in the 1998-1999 season, these two teams have won the most divisional titles. The Caps have won the division title five times (2000, 2001, 2008-2010) and the Hurricanes three times (1999, 2002, 2006). The Hurricanes have one of two Stanley Cups won by Southeast Division teams (Tampa Bay holding the other title).

The Caps are the favorite to add a sixth Southeast banner to the Verizon Center rafters this season, but tonight they will have to face the Hurricanes with a roster that is very much nicked up and filled with spackle. It is not a healthy squad…

Gwillum…an odd name, to be sure. And your specialty is…

OK, I’ll bite. What do you have in the sack there?

“Well, first we have juniper. You chew the seeds and drink white wine to ease pain.”

Just give me the wine…won’t need the juniper.

“Seriously, juniper is good for sprains. And if you burn the juniper and inhale the smoke, it’s good for curing a cough and killing parasites."

You mean it will kill Jarkko Ruutu?

“Don’t know about that…. But here, try rosemary. It’s good for sprains and fractures. And if you sniff the flowers regularly, you retain your youthfulness.”

Well, gimme some of that. Maybe it will help Knuble find his touch from last year. Hey, I hear good things about mugwort.

“Well, the Caps are going on the road, and it is said that if you wrap in around a traveler, it would protect him from wild beasts and fatigue.”

Better save that for the Minnesota trip.

"Well, one other thing…"

“It’s used for women’s diseases, so I don’t know how powerful it will be for your hockey players.”

“Henbane might help. It is often used as an anaesthetic and pain killer. Only one thing, though.”

“It has hallucinogenic properties.”

Uh, I’ll take that. OK, so what if none of this works? What then?

“Well, there is this town in Czech called ‘Chodova Plana.’ There you’ll find a place called the Chodovar Brewery, and there they have a ‘beer wellness center.’ Beer baths, beer massages… might be just the ticket for hockey players.”

Good heavens, maybe that explains how the Bruins beat the Caps twice…two games in Prague, maybe they got some “beer therapy!”

Well, no such luck for the Hurricanes. They are going to have to face the Caps with nothing other than plain old sweat and pulled pork. They are coming into this game against the Caps with a 4-3-0 record, and they have two extra session victories among their wins. This will be the home opener for Carolina, having started the season with a pair of wins in Finland, then traveling to (in order) Ottawa, Vancouver, San Jose, Los Angeles, and Phoenix. They are their own show on The Travel Channel.  Here is how they have done so far... 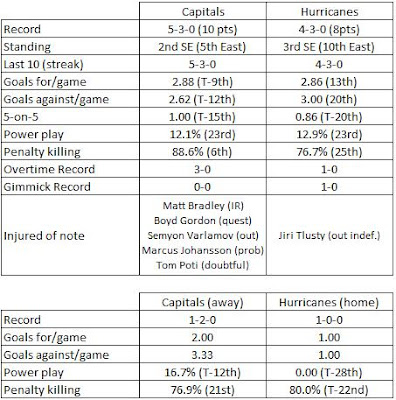 Carolina has benefitted, if not from three-star worth performances on an individual level, then from balance. Of the 19 skaters that have dressed for the Hurricanes thus far, 17 of them have points, and 12 of them have goals. Eric Staal leads in both categories (3-3-6). This could be a pivotal season for the 25-year old center. Since recording 45 goals and 100 points in 2005-2006 (Carolina’s Stanley Cup year), his goals and points totals have dwindled to 29 and 70 last season. These are still fine numbers, but not what might have been expected after hitting the century mark five seasons ago. Staal has not lacked for production against the Caps. In 44 career games he is 18-26-44, plus-8. Last year he recroded his career highs in goals and points against Washington (6-4-10 in six games) as Carolina went 3-1-2 in the season series. Opening the season in Finland did not appear to agree with Staal, who went scoreless in two games against Minnesota. Since returning to North America he is 3-3-6, even, in five games.

Tuomo Ruutu – the “good” Ruutu” (these things being all relative, so to speak) – has had something of an uneven career. Since posting a promising 23-goal, 44-point season in Chicago in 2003-2004, he has averaged 19 goals per 82 games played, but the trick has been the “games” part. Since playing in every game in his rookie season, he has missed over 100 games over five seasons for a variety of reasons. He had a goal in the two games in his native Finland to open the season, but he is 0-1-1, minus-2 in five games since. Over 15 career games against the Caps he is 5-3-8, including a pair of goals and five points against Washington last year in five games.

It was just a dream. Well, dream might not be quite the term for the 25 games Joe Crovo spent with the Caps last season (seven in the playoffs), but in any event things are returned to what they were. Corvo is manning the blue line for the Hurricanes once more. For an “offensive” defenseman, his offensive statistics have been decent, if not spectacular. Since recording 14 goals and 40 points in 81 games with Los Angeles in what was his coming-out season in the first year after the lockout, Corvo has managed to maintain a 12-29-41 scoring average per 82-games since with Ottawa, Washington, and Carolina. Against the Caps he is 3-5-8 in 21 career games. He is off to something of a slow start this year, though, having recorded only three assists (one at even strength) in seven games while going minus-3 (tied for worst on the team).

In goal, it will be Cam Ward once again. After leading the Hurricanes to the Stanley Cup in 2006 after playing in only 28 regular season games, Ward became the workhorse for the Hurricanes. In four seasons after the championship, Ward averaged only 23 losses per season (regulation) in four years. The problem for him, and for Carolina, was that while he was averaging only 23 regulation losses in three seasons in which he played more than 60 games apiece, he lost 23 games in regulation last season while appearing in only 47 games (18-23-5). It was more a reflection of the team around him in that he posted his best career save percentage (.916) and his second best career goals against average (2.69). He has been hard on the Caps, posting a 13-5-3, 2.63 career record against Washington.

Last season Jokinen established himself as a go-to player on offense, leading the Hurricanes with 30 goals, almost twice as many as his previous career high. No longer was he merely the one-trick Gimmick wonder (26-for-50 in the shootout coming into this season). Jokinen is currently tied for the team lead in overall scoring and is coming off a 1-1-2 effort in the Hurricanes’ last game, a 4-3 overtime win in Phoenix. The 13 points he has in 14 career games against the Caps is but one point less than his career high against one club (Minnesota). Last season he was 2-7-9, plus-4 against Washington.

Schultz is at it again. In eight games he is a plus-4, tied for third best on the team at the moment. And he is doing it while assuming a larger responsibility. He is playing almost two minutes more per game than his average last season, and with the injuries to the blue line in the first three weeks he is what passes for a stabilizing influence on defense. He has done this in his usual quiet, unassuming, technical way, eschewing the big hit (and the big out-of-position result that can stem from it). The result is that his presence on the ice has been a reliable indicator of opponents failing to score. He is going to have to keep up the good work as the Caps take to the road with the defense (and goalie Semyon Varlamov) still battling injury.

1. Score first. Both of these teams have struggled with the concept of scoring the game’s first goal. The Caps have done it only twice in eight games, the Hurricanes only twice in seven contests. The Caps have shown an ability to recover from early deficits (4-2-0 in games where they allow the first goal), but Carolina has won both contests in which it scored first. Don’t give them the comfort of that first goal, especially on opening night in Raleigh.

2. Make ‘em pay. Carolina has struggled on the penalty kill, when they have had to go shorthanded. The Hurricanes are only 23-for-30 on the PK (76.7 percent), but it is that “30” number that might be of concern. The Hurricanes have permitted the seventh fewest number of power plays so far. The Caps suffer having not had a large number of power play chances (33, 19th in the league) and being not especially productive on their opportunities (12.1 percent).

3. All Hands Defense. In his last three appearances, goalie Michal Neuvirth is 1-1-0, 3.99, .872. That might be equal parts Neuvirth cooling off from his hot start and the Caps defense being of the mix-and-match variety with the injuries they have endured. That puts a premium on everyone paying attention in their own end. The Caps might be a high-risk, high-reward sort of team, but making mistakes might result in the odd two-on-one situation that finds Tyler Sloan back and Neuvirth dealing with a situation in which neither passer nor shooter is neutralized (uh, like in the first Boston game last week). Can’t have that. Simple, smart, successful. That’s the road formula.

In the end, Carolina is where it probably should be, given their talent and the fact that they have played on the road for all seven games so far. They might even be a game or two ahead of where most would have put them through seven games. On the other hand, the Caps are essentially where they were last year, before they exploded for 121 points, but not where their fans (or perhaps the team itself) thinks it should be. They are nicked, and even the guys who are healthy don’t seem to have yet found their game on a consistent basis. Going on the road sometimes has the benefit of focusing one’s attention. That’s the good thought we’ll be keeping as the Caps begin “Horse Show Tour 2010” with their visit to Carolina.