The Peerless Prognosticator is ON THE AIR!!! -- Game 31: Capitals at Hurricanes, December 14th

It is back on the road for the Washington Capitals as they try to extend their most recent winning streak to four games in Raleigh, North Carolina, on Friday night.  The Carolina Hurricanes will play the role of host, one in which they have been more than a bit more accommodating than they or their fans might like.  After going 3-1-1 in their first five home games this season, which inspired an odd post-win ritual, the ‘Canes are 4-4-2 in their last ten home contests.

Scoring has become something of an issue with Carolina on home ice.  They racked up 13 goals in their first two home wins of the season, an 8-5 win over the New York Rangers followed by a 5-3 win over the Vancouver Canucks.  Since then, the Hurricanes have only 27 goals in 12 games on home ice (2.25 per game).  There has been a bit of an uptick recently, though, Carolina being 3-1-1 in their most recent five home contests.

Carolina, a team that has not reached the postseason since 2008-2009, has had to turn to youth to claw their way back to competitiveness.  And oh, have they done that.  Of the 26 skaters to dress for the club so far this season, nine are classified as rookies.  Forwards Andrei Svechnikov and Warren Foegele of that group have appeared in every game thus far.  Svechnikov has been the biggest contributor on offense of this rookie class so far (6-7-13, minus-1 in 29 games).  Taken with the second-overall pick in last summer’s entry draft, he made the leap directly to the NHL from amateur hockey (the Barrie Colts in the Ontario Hockey League).  He got off to a fast start, too, with two goals and two assists in his first four games in the NHL.  Then, as happens with youngsters from time to time, he hit a dry spell, going seven games without a point.  He has turned things around, though, going 3-5-8, plus-1, over his last 14 games despite getting less than 16 minutes of ice time per game in that span (tied for third on the team in points).  The bad news here for the Caps is that Carolina has earned a standings point in every game this season in which Svechnikov recorded a point (8-0-2).  This will be Svechnikov’s first appearance against Washington.

Not a rookie, but certainly part of the Hurricanes’ focus on youth, Sebastian Aho has emerged as the most dangerous offensive threat for Carolina.  Now in his third season with the team, the 21-year old is the team’s leader in goals (61) and points (142) over that span.  His year to year improvement has been significant, going from 24 goals and 49 points in his rookie season to 29 goals and 65 points last year.  With eight goals and 28 points so far this season, he is on a pace to finish 23-57-80 this season.  His production has a consistent aspect to it, too.  Aho has points in 21 of 29 games going into the team’s game in Montreal against the Canadiens on Thursday.  There is an odd and somewhat disturbing number attached to his performance to date, though: “18.”  Carolina is 7-0-0 in the games in which Aho skated less than 18 minutes, 6-12-4 in the 22 games in which he logged more than 18 minutes of ice time.  Aho is 5-6-11, even, in eight career games against the Caps.

It might be a bit surprising at this stage that the team’s leading goal scorer would be Micheal Ferland, but his 11 goals leads the club.  Ferland, drafted in the fifth round of the 2010 entry draft by the Calgary Flames, was traded to Carolina with defensemen Dougie Hamilton and Adam Fox for center Elias Lindholm and defenseman Noah Hanafin last June.  He started his tour in Carolina on a hot streak, recording six goals in his first nine games.  He has since come back to earth a bit, going 5-1-6 over his last 16 games.  This goal scoring pace is still a bit higher than the 14 goals per 82 games pace he had over four seasons in Calgary.  He goes into this game without a point over his last four contests.  Ferland (who is listed as day-to-day recuperating from a concussion) is 1-0-1, minus-1, in five career games against the Caps. 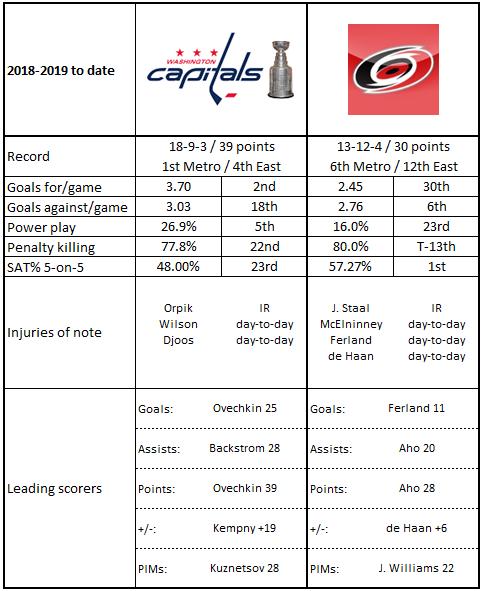 1.  No team in the NHL gets the puck on net with the frequency of the Hurricanes.  Carolina averages 38.4 shots per game, tops in the league.  They also happen to be the stingiest team in allowing shots on goal, averaging 27.5 shots allowed per game.

2.  Carolina is a team that has some history not committing penalties, and that is the case this season.  The 104 infractions charged is tied for third-fewest in the league through Wednesday’s games, with Pittsburgh.

3.  Blocking shots…not Carolina’s thing.  The Hurricanes are last in the league in that statistic (359).

4.  Perhaps Carolina doesn’t have to block shots because they are so adept at taking away the puck from opponents.  They have been credited with the second-highest number of takeaways this season (331), behind only Vegas (350).

5.  Shots on goal, shots allowed on goal, takeaways…the Hurricanes’ high ranking in those areas suggest they should have good underlying numbers.  They do; their 57.27 percent shot attempts-for at 5-on-5 is best in the league, and by a large margin (San Jose and Vegas are at 54.79 percent).

2.  Washington’s power play has a distinct Dr. Jekyll and Mr. Hyde quality to it.  While the Caps are humming at 34.5 percent at home, second-best in the league, they are at only 15.8 percent on the road (23rd).

3.  No team in the Eastern Conference has been shorthanded on the road more often that the Caps.  They have been shorthanded 56 times so far this season, through Wednesday, tied with the Boston Bruins.

Justin Williams has had a full, rich career.  Now in his 18th season in the NHL, winner of three Stanley Cups, a Con Smythe Trophy winner as the MVP of the 2014 postseason with Los Angeles, nicknamed “Mr. Game 7” for his exploits in the deciding game of playoff series, he is now in the last year of his current contract with the Hurricanes.  If he plays in 81 games this season (he has yet to miss a game), he will have played more games as a Hurricane (428) than he did for any of the other three franchises for which he played (Washington, Los Angeles, and Philadelphia).  His days as a prolific scorer are in his past (he has not had a 30-goal or 60-point season since 2006-2007), but he is still a consistent contributor (he has not averaged less than half a point per game since 2008-2009).

That he is the oldest skater on the club at age 37 complicates his contract situation going forward, but his vast experience and a certain impish bent provides a certain steadiness and calm in the face of the stress of the day-to-day NHL that a young team can find valuable.  He seems to be coming around in terms of his numbers, too.  After recording just one goal in his first 19 games, he has five goals in his last ten games, including goals in two straight contests going into Thursday’s game against Montreal.  Williams is 14-23-37, plus-11, in 47 career games against the Capitals.

As if 2017-2018 was not enough – his seventh Maurice Richard Trophy as top goal scorer, Con Smythe Trophy as the league playoff MVP, his first Stanley Cup, and becoming a father for the first time – he is now playing beyond the moment in a sense.  His is now a pursuit of history.  Thirty-three year olds with more than 1,000 regular season games and more than 100 postseason games are supposed to be slowing down.  Ovechkin, however seems to be just warming up, or at least fighting Father Time to a draw.  He has 25 goals in 30 games so far to lead the league, but as if that was not enough, consider that over his last 82 games, including the 2018 postseason, he has 57 goals, a number that top every regular season goal total of his career, save his 65-goal season in 2007-2008.

His production at this age, entirely consistent his history coming into this season, has people wondering if the long thought of as untouchable record of 894 goals set by Wayne Gretzky can be run down.   He remains the spark that ignites the Capitals engine, too.  He has goals in 18 of the Caps’ 30 games to date, and Washington has a 15-2-1 record in those games.  He will bring a pair of impressive streaks into the game against Carolina – goals in four straight contests (including a hat trick against Detroit in his last outing) and points in 12 straight games.  One would have to think he has a good chance to add to both; he is 36-49-85 in 73 career games against Carolina.

Carolina is making progress toward becoming a reliably competitive team, and they appear to have a solid core of young players to lift them to the next level.  However, they have holes – they can struggle to score at times, and their goaltending does not inspire a lot of confidence (that stinginess in allowing shots comes in handy).  At the other end, the Caps are getting healthier just as their team is in the midst of perhaps its most consistent run of solid hockey this season (10-2-0 in their last dozen games).  If the Caps can jump on this team early, it could be a short evening.  But if the Caps are lethargic and let this club hang around, Carolina can make it a difficult night.  There will be no sleepwalking to a win here.