Mysteries of the Universe 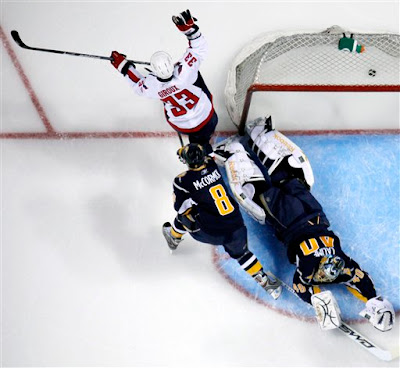 Black holes, dark matter, the appeal of Jimmy Kimmel, and this...

The American Hockey League announced today that Hershey Bears left wing Alexandre Giroux has been named the Reebok/AHL Player of the Month for October. Giroux registered seven goals, seven assists and a plus-9 rating in just seven games for the Bears last month.

How can someone who consistently has this level of production at the AHL level of play look so discombobulated at the NHL level?
Posted by The Peerless at 10:13 PM 4 comments:

In the middle of every difficulty lies opportunity

So said Albert Einstein. The difficulty at hand is that Alex Ovechkin is listed as “week-to-week” with what is called an “upper body injury.” What that means in terms of what, precisely, Ovechkin is suffering from is really of little relevance. He is out. What is relevant is how the Capitals react to the first (apparently, at least) lengthy absence of the club’s franchise player since he set foot in Washington in the fall of 2005.

If the team looks at it that way, then yes, it is a difficulty. But difficulties turned sideways are opportunities, and this is an opportunity. No single player is going to make up for the production that Ovechkin provides. He isn’t the world’s best hockey player for nothing. But individual players can do their part on both sides of the puck to make up for the one-and-a-half points a game he accounts for.

Nicklas Backstrom doesn’t have to score a lot more goals, but bearing down to take advantage of opportunities instead of making the next pass might help.

Alexander Semin doesn’t have to suddenly become a 60-goal scorer, but being more consistent about his effort in giving an honest 60-minutes’ worth might get him an additional goal a week or so.

Mike Green has had 46 shot attempts either blocked or missed. If he can bear down to reduce that total and get more opportunities on net, he might improve on his two goals or provide some opportunities for players such as Brooks Laich or Mike Knuble to improve on their goal totals.

Tom Poti is going to get more power play time. He has only 13 shots on goal in 14 games. No Capital has had more than the 26 shots blocked that Poti has. Bearing down and getting more attempts through might not allow him to improve on his goal scoring (he has yet to pot one), but it could create an additional opportunity or two a game that someone can cash in on.

Tomas Fleischmann is going to get a few additional minutes. He’s come back strong from his early season physical problems, but now he’s going to have to keep it up with a bit brighter light shining on him.

Eric Fehr... it’s time, when you get back from your own injury, that is. No, not to be a 30-plus goal scorer, but time to give evidence that you can score at a 20-goal a game pace.

You guys on the third line... you don’t have to abandon your “shut down” attitude, but getting some offensive production would be good. The trio of David Steckel, Matt Bradley, and Quintin Laing has four goals in 14 games (a total of 39 man-games). Bradley has three of them.

And it would go a long way toward improving that save percentage if the skaters could clamp down on shots allowed. Only six teams have allowed more shots per game than the Caps have thus far (31.5 a game). Shave that by ten percent – a shot a period or so – and there is a contribution on the other side of the puck.

Part of that is being more careful with the puck to prevent rushes the other way. Only four teams have more giveaways than do the Caps (139). That’s an average of ten a game. Even in a high-risk offense, that’s a lot. Since a good portion of the offense is missing for the time being, a little more discipline and focus might be in order. That’s not to say that the Caps need to be Phoenix overnight (51 giveaways in 13 games), just some more discipline.

Missing the biggest cog hurts, but in the larger scheme of things it is an opportunity for other players to find other parts of their game. No one has to assume the whole burden. But each player must find a way to provide that five or ten percent more... more production, more focus, more discipline. If they can find that within them now, then the Caps might be a more complete team when the games are more meaningful in the spring.

It is an opportunity.
Posted by The Peerless at 9:28 PM 4 comments: