The Peerless Prognosticator is ON THE AIR!!! -- Game 78: Capitals at Coyotes, April 2nd

The Washington Capitals are no sooner done with their 4-2 win against the Colorado Avalanche, and they have to hop a plane to the Valley of the Sun to face the Arizona Coyotes in Glendale, Arizona.  The Caps recorded four goals or more in a game for the 29th time this season in the win. In the Coyotes, the Caps will be facing a team that has allowed four or more goals in 29 games this season.

Former Capital Boyd Gordon has never been much of a point producer in his career, but he has been a reliable double digit scorer.  Until this year, that is.  Gordon has four points in 60 games this season, both of his goals coming in these last dozen games for the Coyotes, and his four points almost ensures that he will finish the season under ten points for the first time since 2010-2011 in his last season with the Caps, the only full season in his career that he finished under the ten-point threshold.  In five career games against the Caps, Gordon is 1-1-2, plus-1. 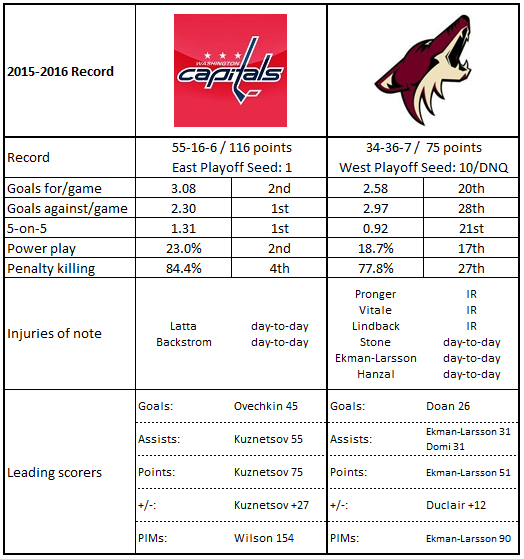 1.  Arizona’s special teams are not especially special.  Their special teams index (power play plus penalty killing rates) of 96.5 ranks 26th in the league.  The Coyotes’ penalty kill is particularly troublesome.  It has allowed at least one power play goal in five of the last six games (15-for-23/65.2 percent).

2.  The Coyotes’ shot differential per game, minus-3.2, is 26th in the league.  It is probably worth noting here that the bottom seven teams in the league in this statistic are outside the playoff mix.

4.  There is good news and bad news concerning the Coyotes and leads after one period.  The good news is (and remember, these things are relative) they have taken a lead into the first intermission 24 times in 77 games, tied for 14th-most in the league.  The bad news is they have only 14 wins, tied for fourth-fewest in the league, and their winning percentage (.583) ranks 28th.

5.  The Caps are getting another team that struggles with possession.  Arizona is 28th in the league in Corsi-for at 5-on-5 overall (47.0 percent), 27th in score-adjusted Corsi-for (46.6 percent).  They are worse at home, ranking 29th overall (47.2 percent) and 28th in score-adjusted Corsi-for (46.0 percent).  The Coyotes have gone nine straight games failing to hit 50 percent Corsi-for at 5-on-5 and topped 50 percent just 23 times in 77 games this season (numbers from war-on-ice.com).

2.  Last season, Jay Beagle scored ten goals in 62 games, the first time in his NHL career he hit the ten-goal mark.  Although it will be a heavy lift to get to ten this season, his eight goals in 53 games is almost as good on a goals-per-game basis (0.15 to 0.16), and his points per game is virtually identical to last season (0.32).

3.  Jason Chimera recorded his 19th goal of the season last night in Denver, continuing that odd sawtooth patter of goal scoring from year to year.  After recording 20 (his only 20-goal season to date) in 2011-2012, he had three the following year, then 15, followed by seven last season.  His next point will be his 40th , making it his second career 40-point season.

4.  Evgeny Kuznetsov recorded an assist against Colorado last night, giving him points in consecutive games for the first time since he had points in five straight games from March 7-18 (which was followed by a five-game streak without a point).  His 55 assists for the season is tied for the seventh-highest total for the Caps in the post-2004—2005 lockout era.  If he gets five more he would have the fifth instance of 60 or more assists in that time.

5.  The Caps finished last night’s game with a Corsi-for of 69.1 percent, their highest of the season on the road – highest of any game, in fact.  It was their third straight game of more than 50 percent on the road, two of them at 60 percent or better (numbers from war-on-ice.com).

It says something about the regard in which defenseman Oliver Ekman-Larsson is held that there should be speculation that the Arizona Coyotes would consider trading him for the number one overall pick and the chance to select this year’s generational player, Auston Matthews.  Arizona has put the kibosh on that talk for the time being, but “OEL” remains a budding star in the Arizona desert.  Now in his sixth season, he is still just 24 years old (25 in July).  He is one of just five defensemen over those six seasons to have recorded 75 goals and 200 points.  Two of the others – Brent Burns and Dustin Byfuglien – are as much “hybrids” of defemseman/forward, leaving Shea Weber and Erik Karlsson among the “pure” defensemen in that group.  Nice company.  In six career games against the Caps, Ekman-Larsson is 1-3-4, minus-2.

John Carlson had an assist in the Caps’ 4-2 win over Colorado on Friday night.  That make three points in five games for Carlson since he returned from a lower-body injury.  And, it is evidence of how reliable a defenseman he has become at the offensive end of the rink.  His 27 assists in 52 games this season is almost identical on an assists-per-game basis (0.52) as it was last season (43 in 82 games/0.52), and he could finish the season averaging more than 0.60 points per game for the second straight season (he is at 0.65/game this season, going 0.67/game last season).  He could be one of just ten defensemen over the past two seasons to appear in at least 100 games and record at least 0.65 points per game.  Carlson is 3-2-5, plus-6, in seven career games against Arizona.

This is another game that the Caps should win, if for no other reason that the Coyotes resemble the team they just beat in the Colorado Avalanche.  Arizona struggles with possession, their special teams are weak (especially their penalty killers), and they lack depth in top-end skill.  The difference here is that both Coyote goalies are playing well (Colorado’s Semyon Varlamov allowed three goals to the Caps for the sixth straight game in which he allowed three goals), and that is always something of a wild card.

Nevertheless, the Caps are in their finishing kick of the regular season, and despite coming to the finish line while the rest of the league seems to be coming out of the final turn, they are 6-2-1 in their last nine games, 3-1-1 of that on the road.  This game should add to that win total.

The Washington Capitals gave a dominating performance on Friday night, defeating the Colorado Avalanche, 4-2, in Denver.  The game was not nearly as close as the score suggests, as the Caps hit post or crossbar no fewer than five times in the contest, three times in a scoreless first period.

The Caps broke on top in the second period, taking advantage of a lapse by the Avs.  Chris Bigras was behind the net waiting for a sliding puck to arrive, but he appeared to look up to survey the situation before he had control of the puck.  Jay Beagle took advantage by stripping Bigras of the puck when he tried to reverse it along the boards, and sneaking it between the post and the left pad of goalie Semyon Varlamov to make it 1-0, 8”50 into the period.

Four minutes later the Caps doubled their lead.  On a power play, Evgeny Kuznetsov circled though the right wing faceoff circle and fed the puck to Marcus Johansson to the goal line extended to the left of Varlamov.  Johansson stepped out and slid the puck across to Alex Ovechkin, who snuck behind Gabriel Landeskog on the weak side.  Ovechkin stuffed the loose puck into the net before Varlamov could scramble across and it was 2-0 at the 12:57 mark.

Less than two minutes later the Caps struck again.  A slap shot by Jason Chimera sailed wide to the left of Varlamov and skittered out to Mike Richards at the left point.  A Richards drive was redirected by Chimera from between the hash marks past Varlamov’s right pad at the 14:16 mark to make it 3-0.

The Avs got one back on a Jarome Iginla power play goal in the last minute of the second period.  It gave the Avalanche some measure of momentum going into the third period, but the Caps held firm over the first 15 minutes of the final frame.  Colorado got within a goal with some hustle in the late stages of the period.  Blake Comeau chipped the puck deep into the Caps’ end, then worked his way around Karl Alzner to get it back.  He fed the puck in front for a point-blank shot by Carl Soderburg that goalie Braden Holtby turned aside.  However, Landeskog jumped on the rebound and batted it over Holtby to make it 3-2 at the 14”21 mark.

Colorado got no closer, though, and T.J. Oshie scored an empty net goal with some hustle of his own, outracing Erik Johnson to prevent an icing call and tapping the puck into the open net for the final 4-2 margin.

-- Ovechkin’s power play goal made it three games in a row in which the Caps scored with the man advantage.

-- Beagle also had an assist in the game, making it his first multi-point game since October 22nd, a 3-2 win over the Vancouver Canucks.

-- Ovechkin finished with eight shots on goal, the most he had in a single game since he had nine in a 3-2 win over the Arizona Coyotes on February 22nd.

-- Tom Wilson and Brooks Orpik tied for the team lead with six credited hits apiece.  It was Wilson’s hit on Nikita Zadorov – a shoulder-to-chest hit as Zadorov was skating behind his own net with his head down – after just starting a shift that ended Zadorov’s night early in the second period.

-- Daniel Winnik had only one shot attempt (miss) in 13 minutes of ice time, but he did have an assist on the Oshie empty net goal and finished with a plus-2.  That makes five points in his last eight games (2-3-5).

The hockey gods toyed with Caps fans, keeping the game close on the scoreboard even if it wasn’t nearly so close on the ice.  It is was makes hockey such an exasperating game at times.  It took the Caps a while to be rewarded for their efforts, but when they broke through in the second period one had the feeling that it was their game, especially given the Caps’ success in games when taking a lead into the third period (35-0-1 coming into this game).  It was a fine effort to set a franchise record for wins in a season (55) and extend their franchise record for road wins (26).  Another step on a remarkable journey this season for the Caps.

Posted by The Peerless at 1:00 AM No comments: