Pittsburgh. The Steel City. The City of Bridges. The Paris of Appalachia (really…really?).  For Capitals fans, The City Where Dreams Went to Die.  Well, right now, it is The City That Wishes Its Hockey Team Would Find a Defense.  And it is where the Capitals will resume action on Sunday and Tuesday nights, looking to get some more separation from themselves, owners of a 2-0-0 record after two wins over the Buffalo Sabres, and the Pens, who dropped a pair of ugly games to the Philadelphia Flyers by a combined 11-5 margin.  Only the Chicago Blackhawks have a worse goal differential through Friday’s games (minus-7) than the Penguins’ minus-6.

Goaltender Tristan Jarry has been the unfortunate recipient of some iffy defense in front of him, but like a pitcher in baseball who has poor defense behind him, it is he who takes the “L” on his ledger.  And, through Friday’s games, Jarry is the only goalie in the league with two losses on that ledger.  He has the second worst goals against average of 35 goalies to dress to date (7.57), with St. Louis’ Ville Husso having the only one that is worse (12.15), but in only 19:45 of ice time.  Jarry’s .710 save percentage is worst in the league.  It is early, to be sure, but his cold start extends what was a poor regular season finish last season in which he lost his last four decisions (0-4-0) with a 4.53 goals against average and a .845 save percentage.  He did have a fine outing in his only postseason appearance, stopping 20 of 21 shots but still dropping a 2-0 decision to the Montreal Canadiens in the series-clinching win for the Habs.  It is the kind of start that might cause collars to get a bit tight for a team with Stanley Cup aspirations that gave Jarry a three-year/$10.5 million contract last October and let Matt Murray go in free agency to the Ottawa Senators for four years and $25 million.  Jarry has never faced the Capitals.

It is only two games in, but if you had Brandon Tanev and Mark Jankowski as the leading point producers for the Pens, buy a lottery ticket. Tanev has two of the Penguins’ five goals to date with an assist to bring his point total to three.  This is Tanev’s second season in Pittsburgh after spending four seasons with the Winnipeg Jets.  His signing as a free agent last season was met with some head scratching…

“For some reason the Penguins felt the need to lock themselves into a 27-year old third/fourth line winger with 24 career NHL goals for the next six seasons. Oh yeah, and at a premium salary rate of $3.5 million per season.

The Pens are a team that has signed what instantly has been head-scratchingly bad contracts from the moment it was signed before. Last year it was Jack Johnson who also got a ton of term and money.

This one doesn’t look much better. Decent player, but lower line wings have a short shelf-life. And why commit SIX years? This one is tough to wrap a mind around.”

Tanev ended up having a typical (for him) season, going 11-14-25, minus-1, in 68 games getting 14:46 of ice time a night.  He also finished 18th in voting for the Selke Trophy.  All-in-all, a decent, if unspectacular, season for a bottom-six forward.  However, when you consider that he had the same salary cap hit ($3.5 million) as the team’s leading goal scorer (Bryan Rust, with 27, who was in the second year of his current contract), either his contract does not look like a value deal (it is not), or Rust is a bargain (he is).  Tanev is 1-2-3, plus-1, in eight career games against the Caps.

Jankowski is in his first season with the Pens, signed as a free agent after spending his first four NHL seasons with the Calgary Flames.  His is a much friendlier one-year/$700,000 deal, even though he has something in his career Tanev does not – a 30-point season, going 14-18-32, plus-6, with Calgary in 2018-2019.  Unfortunately for Jankowski, he could not build on that success last season, going just 5-2-7, minus-12, in 56 games for the Flames.  His appeal to the Penguins was not, perhaps, whatever offense he could provide, but his penalty killing skills.  As general manager Jim Rutherford put it at the signing, “Mark is another versatile player that gives us an option at the center position.  His added experience on the penalty kill, where he has had success over the last few seasons, makes him a good fit for our team."  The Penguins might use some better penalty killers, even though their 82.1 percent penalty kill last season was their best since an 84.4 percent penalty kill in 2015-2016.  Jankowski is looking for his first career point against the Caps, going 0-0-0, minus-2, in five career games against Washington. 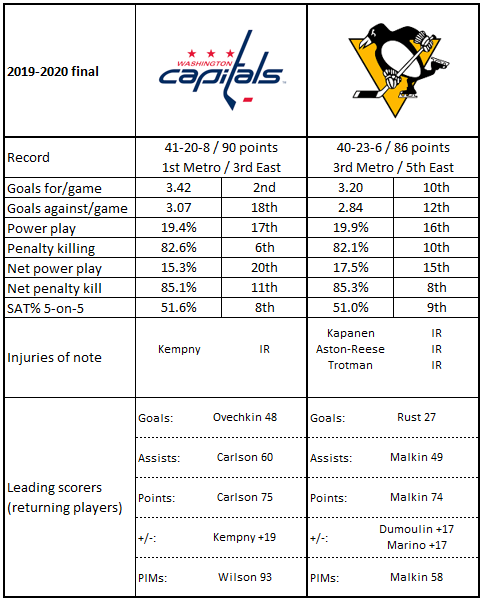 1. Despite losses in their first two games, the Penguins have the second-best shot attempts-for at 5-on-5 in the league (59.3 percent), trailing only Carolina (66.7 in one game) through Friday’s games.

2. The Pens and the Flyers spent a lot of time expressing their ill feelings toward one another in their two games.  The two teams combined for 110 credited hits, Pittsburgh with 54 (third in the league) and Philadelphia with 56 (first).

3. The Pens will be looking for a better start, especially on defense.  They allowed five goals in the first periods of the two games against the Flyers, the most first-period goals allowed in the league through Friday.

4. Better finishes would be good, too.  The five third-period goals allowed in the Penguins’ first two games are also most in the league.

5. For what it is worth (not much at this stage), the Penguins do not yet have a point from a defenseman.

1. The Caps have points from 11 different skaters so far, not a bad distribution over two games.

2. John Carlson and Dmitry Orlov…each a minus-3.  Not a great start on that statistic.

3. If the Pens and Flyers were in an ornery mood with one another, third and fifth, respectively, in credited hits in the first two games, the Caps are not far behind – fourth in the league (46).

4. No Capital has yet hit iron with a shot attempt.  That won’t last.

“The Kid” is 33 years old.  He has relinquished his “best player in the NHL” in the eyes of many to Connor McDavid.  Some might also think players such as Nathan MacKinnon have eclipsed him.  But for one shift, needing a goal to win or tie, would you really want any other player on the ice?  When he is on the ice, that is.  And there might be no more important question concerning the Penguins’ playoff chances than whether Crosby can shake off the injury (sports hernia) that caused him to miss 28 games last season – the seventh time in his career he missed more than five consecutive games to injury -- and lead the Penguins deep into the postseason once more.  Even with Crosby in the lineup, playoff success has been hard to come by for the Pens (one playoff series win and a 7-13 record the last three postseasons despite his having an 11-14-25, plus-3 scoring line).  But if Crosby has any lingering health issues, or new ones for that matter, reaching the playoffs in a loaded East Division will be a heavy lift for the Penguins.  It matters.  In 15 seasons before this one, Crosby never averaged less than a point per game over a season.  Ten times he averaged 1.25 points per game or better, the last time coming in 2018-2019 (35-65-100 for 1.27 points per game). Crosby comes into this series with goals in his first two games, the first time he scored goals in his first two contests since 2016-2017, when he opened the season with a three-game streak.  Caps fans hope that history is not repeated.  In 52 career games against Washington, Crosby is 26-48-74, minus-4.

Two games in, and Alex Ovechkin doesn’t have a goal?  He doesn’t even lead the team in shots (he is fourth, with five).  What’s the matter?  Has age finally caught up with him?  Is he spending to many late nights changing diapers?  Has scoring goals grown tiresome?  The last time Ovechkin failed to score a goal in either of his first two games (2016-2017), it was the only time in his last seven seasons that he failed to score at least 45 goals (33 in 82 games, and more than half of those (17) were on power plays). Then again, he went his first four games without a goal in 2012-2013, and then he scored 32 goals in his last 44 games to close the abbreviated season and lead the league.

Capitals, Penguins, you know the drill.  Even in an empty arena there will be no lack of energy or intensity, brought into sharper focus by the fact that these could be two teams fighting for a ticket to the playoffs come May.  Getting an eight-point edge on the Penguins with two wins in eight games these teams will play against one another by the end of this two-game series could be huge for the Capitals.

Posted by The Peerless at 1:01 PM No comments: