The Peerless Prognosticator is ON THE AIR!!! -- Caps at Bruins, December 18th

Well, here we are. Seven games without a win, seventeen days. The pain of losing has been there for all to see in the first installment of 24/7, and with the Caps now in imminent danger of dropping through the standings – the Caps are only four points ahead of eighth-place Boston this morning – the sharks are out to feast on the Caps, who are limp in the water. Tonight’s “shark” is a Bruin, and it is having a tough time of its own, with…and who are you? 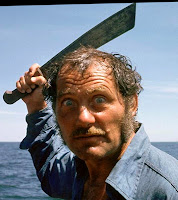 You know me. You know what I do for a living. I'll go out and get this bird for you.


Yeah, yeah. He's a bad one and it's not like goin' down the pond chasing blue-gills and tommy-cods. This is a fish…
Bruin…


Yeah, yeah… that can swallow a man whole. A little shakin', a little tenderizing and down ya' go. You gotta get this fellow and get him quick. If you do, it'll bring a lot of fans back and you've got your team back on a winnin’ basis. A shark…
Bruin…


Yeah, yeah… of that size is no pleasure and I value my neck at a hell of a lot more'n 3,000 bucks. I'll find him for three. But I'll kill him for ten.
Who said anything about a reward? We’re just a poor blogger slappin’ together a few nouns and verbs.

The bastard is costing you more'n that every day. Do you wanna stay alive and annee up the ten or play it cheap and be playin’ golf next spring. I'm gonna kill this thing... just a matter of whether I do it now -- or at the end of the season.

Well, seein’ as how we don’t have ten to toss around, the Caps are going to have to do the killin’ of the Bruins tonight. And as we were going to mention, the Bruins are suffering a bit of a rough patch themselves. Losers of their last three games (0-2-1), Boston has had their strength betray them. First, a look at their numbers to see just where that strength lies… As you can see, this is a very able defensive team – top-five in goals against, 5-on-5, and penalty kill. And goaltender Tim Thomas leads the NHL goaltender rankings by a wide margin in goals against average and save percentage. But in the last three games the Bruins have allowed nine goals. This is by no means bad defensive play, but rather a result inconsistent with the stingy in the extreme defense Boston has displayed otherwise this season.

Thomas is the key. In 21 appearances this season he has allowed more than two goals only five times. That equals the number of shutouts he has this season, which is tied for the league lead. One of those three or more goal instances came against the Caps on November 5th, when Thomas allowed three second period goals before being pulled at the second intermission in favor of Tuukka Rask. It is the only time in 21 appearances this season in which Thomas has been pulled. That might be small comfort to Caps fans, though, since Thomas has two other appearances against Washington this season, both of them wins, and both of them instances in which he allowed but a single goal.

It might be a measure of the rough-edged nature of this team that Milan Lucic would be its leading scorer. Not that the rugged forward can be considered an elite scorer (he is tied for 35th in points), Lucic does have 16 goals, a number that only Alexander Semin tops for the Caps. What is more, Lucic has been hot lately. He has points in eight of his last 11 games over which he is 6-4-10 (four goals in his last five games). He is 1-3-4, even, in three games against the Caps this season.

Gregory Campbell has been an interesting player for Boston. His father happens to be Colin Campbell, NHL Director of Operations, who was a party to a series of e-mails with former head of officiating Stephen Walkom that cast aspersions on his objectivity in his official role. The particulars of that episode are not as relevant as the performance of young Mr. Campbell since their revelation. Over his last dozen games he is 1-1-2, plus-1. Campbell is not a prolific scorer by any means (3-4-7 in 30 games this season), but he has been particularly quiet lately on the scoresheet. It might also be worth noting that in those last dozen games he has been whistled for four minutes on two penalties, this after being hit with 35 minutes in 18 games before that.

Zdeno Chara is the defenseman that first comes to mind in thinking of the Bruins, but it shouldn’t escape notice that Andrew Ference has the same plus-14 that Chara has. Ference bounced around the Penguins’ system early in his career before being sent off to Calgary in 2003. He arrived in Boston in 2007 and has bounced around after a fashion with the Bruins. In four full seasons (including this one), he has been minus-14, plus-7, minus-7, and plus-14. He is not much of a scorer (2-42-44 in 187 games over the past four seasons), so it might be that the plus-minus he is putting up is something of an indicator of just how well the Boston defense is playing. This year, it is playing quite well, and Ference’s numbers reflect that. So far against the Caps this year he has not registered a point in any of the three games played, but he is a minus-4.

He just keeps on going. Half of his goals this year (three of six) are game winners, including two of his last three. He just hasn’t had many goals (six in all) and has only two in his last ten games after getting a pair against Florida on November 24th. He is a notorious Cap-killer over his career, but he is only 0-2-2, minus-4 in three games this season. He is the kind of player who can get well against a struggling team, and if he puts up crooked numbers on the score sheet tonight, you can bet the Caps are still struggling.

OK, he’s not a player, but the spotlight is on Mr. Language Skills after the first installment of HBO’s 24/7 series featured him in a series of tirades during this losing streak. How he manages the bench – and how he manages himself behind it – bears watching. Our advice, just let Bruce be Bruce. It’s served him well at a lot of hockey stops so far.

1. Be tight. No, not “tight” as it pertains to being unable to skate or shoot comfortably. Be tight on defense. Falling behind on the road, especially against a team as defensively sound as this could get the crowd in the game and play the game on Boston’s terms. If that was to happen, the competitive portion of the game might be over, even if the score is, say, 2-0 at the first intermission.

2. Big Stars, Big Game. The stars have to play like stars at some point to get the Caps back on a “winnin’ basis,” and that means Alex Ovechkin, Nicklas Backstrom, and Mike Green (assuming Alexander Semin is out). That is the group that is going to have to reverse the recent curse of poor play.

3. Play your game. One has to wonder if the Caps are suffering stage fright. Not of the sort that turns one’s legs to mush in an NHL rink, but the kind that comes with being under the bright lights of television. The Caps simply haven’t been the same since the HBO folks came to town. Play your game…

In the end, playing their game is what it comes down to. The Caps haven’t played it lately. Nine goals in seven games, four of them coming in a single contest. The Caps haven’t played bad defense (the 7-0 loss to the Rangers notwithstanding, the Caps have allowed only 17 goals in six games), but that can use some tightening as well. The penalty killers are only 19-for-26 (73.1 percent) over the seven-game losing streak.

A road trip might be just what the doctor ordered for the Caps – a chance to get away from the cranky fans at Verizon Center and bond on the road. Well, it’s an idea…