Week 16 was the worst for the Washington Capitals this season.  It was the first time in 16 weeks this season that the club failed to earn at least one standings point.  It was the first time that the Caps finished a week looking up at a team in the Metropolitan Division standings in quite some time.  And it had the look of a team running on fumes as they dead stick their way toward the All-Star game break. 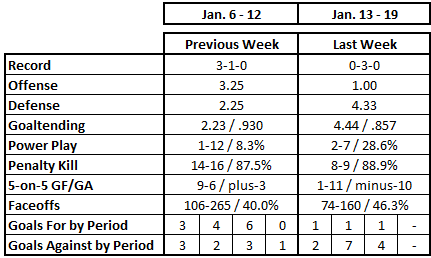 Not since Week 22 of the 2016-2017 have the Capitals gone an entire week without earning at least one standings point (they were 0-3-0 in that week almost two years ago).  In 46 weeks since then, going into last week, the Caps had 30 winning weeks, seven weeks of a .500 record in standings points earned, six losing weeks, and none in which they were shutout in standings points.  It is – was – a remarkable record of consistency.

It was not just the losses, though, it was the “to whom.”  The Caps had chances to avenge lopsided losses to two opponents barely two weeks before the rematches and lost in lopsided fashion once more.  They lost at home to the St. Louis Blues, 4-1, after dropping a 5-2 decision in St. Louis on January 3rd, and they lost to the Nashville Predators, 7-2, in Nashville after being clocked, 6-3, on December 31st at Capital One Arena.

The Caps closed the week with a loss to the surging New York Islanders, 2-0, in what might have been the most purely uninteresting game of the season.  Not that former head coach Barry Trotz minded.  He got to visit the scene of some of his greatest triumphs, watch a well-done appreciation video of his seasons in Washington, and lead his team to a win that propelled them into the top spot of the Metropolitan Division ahead of the Caps.

The two losses at home to St. Louis and the Islanders gave the Caps eight regulation losses on home ice this season, surpassing the seven they had in 2016-2017, tying the eight they had in 2015-2016, and putting them on a path to surpass the 11 that they had last season. 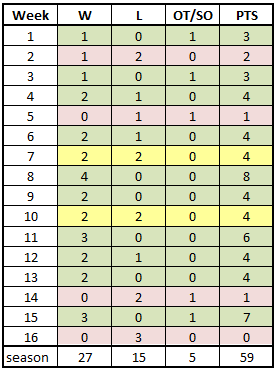 Three games, three goals, one-two-none.  There isn’t enough paint at Home Depot to cover up that mess.  No team in Week 16 scored fewer goals  Shoot, even the utterly pathetic Los Angeles Kings, who finished the week last in scoring offense in the league (2.22 per game) had five goals in three games.  The Caps had one even strength goal for the week.  I will repeat that…

The Washington Capitals had one even strength goal for the week.

Lack of goals sometimes stems from lack of shots.  Such was the case for the Caps, who managed only 76 shots on goal for the week (25.3 per game), far below the 29.3 shots on goal per game at which they finished the week.  Even for a team that prides itself on “quality over quantity,” that was a low volume.  How low?  Nicklas Backstrom tied Alex Ovechkin for the team lead with 10 shots apiece.  Only two other Caps had more than five – Evgeny Kuznetsov (eight) and Oshie (seven).

Thirteen goals in three games is a lot of goals.  It resembles the difficulties the Caps were having at the start of the season, when they could not keep pucks out of their own net.  Over their first dozen games of the season they had a rolling three-game total of 13 or more goals five times in 10 instances.  In their last ten instances, they have 13 or more goals allowed over three games four times.  Put another way, this is a club that has allowed four or more goals four times in their last ten games.

Shots allowed is not necessarily the culprit here, at least at the level of volume alone.  The Caps allowed 91 shots on goal for the week.  Of the 14 teams playing three games in Week 16, that is tied (with San Jose) for the eighth-highest amount.

Shot attempts are a different matter.  The Caps were minus-27 for the week in shots attempted-for and shots-attempted against at 5-on-5 for the week.  Being 11th among 14 teams playing three games in shot attempt differential at fives was bad enough.  Being minus-27 when tied (13th of 14 teams) and minus-30 in close situations (13th of 14 teams) was worse.  The Caps could not get teams off their collective back.

It was not a good week overall, but in a way it was a long time coming.  Pheonix Copley allowed six goals on 36 shots in his first appearance this season, a 6-0 loss to the New Jersey Devils on October 11th.  In 15 appearances after that he stopped 385 of 417 shots, a .923 save percentage.  Only two of 46 goalies logging at least 750 minutes over those two months had a better save percentage (Tuukka Rask and Frederik Andersen, both at .928).

However, an injury to Braden Holtby against Columbus in the last game of Week 15 kept him out of the lineup to start the week, and it gave Copley a chance for consecutive starts for the first time since he had three consecutive starts in Games 17- 19 this season.  He won two of the decisions, all of them on the road, sandwiching wins over Minnesota and Colorado around a loss in Winnipeg and stopping 71 of 77 shots overall (.922 save percentage).

Things did not go as well for Copley in Week 16.  The week started well for him, stopping all 14 shots he faced in the first period against St. Louis to open the week.  However, he allowed four goals on 23 shots to end the game and then allowed all seven goals to Nashville on 29 shots in the middle game of the week, a true “take one for the team” moment for Copley, given Holtby’s injury status.  It made for a .788 save percentage over his last five periods of hockey for the week.

Holtby returned against the Islanders on Friday, and he looked superb for 45 minutes.  He stopped the first 22 shots he faced over that span, but he allowed goals on consecutive shots 2:26 apart, to Josh Bailey and Cal Clutterbuck, in dropping a 2-0 decision.  Still, it was the 16th time in 32 appearances that Holtby stopped at least 92 percent of his shots.  If you want a basis of comparison for that fact nugget, he was at a .920save percentage or better 35 times in 66 appearances in his Vezina Trophy season in 2015-2016.

On the other hand, you could say two things about the power play to stick a pin in the balloon of hope.  First, the Caps scored on their first power play of the week, and then they went 1-for-6 (16.7 percent).  The other thing is that they had only seven opportunities in three games.  While it is true that the two opponents faced at home– St. Louis and the Islanders – generally play well within the rules (St. Louis and the Islanders rank in the bottom ten in the league in road shorthanded situations faced), the Predators had the fourth-highest number of shorthanded situations faced at home to end the week, and the Caps managed only two power plays against them.

It was a bit of an odd week, the infrequency of opportunities masking a level of efficiency the Caps have not had on their power play in a while.  They managed 11 shots on goal in 11:48 of power play time, and they spread the shots around, five different players with at least one, Ovechkin and Evgeny Kuznetsov leading with three apiece. 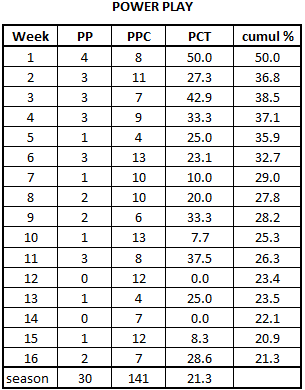 The other side of special teams had a good week, continuing a nice run of late.  In killing off eight of nine shorthanded situations, the Caps are 22-for-25 (88.0 percent) over the last two weeks, seventh-best in the league over that span.  Take the result with a grain of salt, since the Islanders and Predators, who went a combined 0-for-7 against the Caps, rank in the bottom ten in power play efficiency this season (24th and 29th, respectively), but one takes their opportunities for improvement where presented.

For the week, the Caps allowed only 12 shots in 15:06 of shorthanded ice time.  That makes only 21 shots allowed in 35:50 in shorthanded ice time over the past two weeks.  If there is something on which to build as the Caps try to navigate their way out of their recent slump, penalty killing seems to be it. 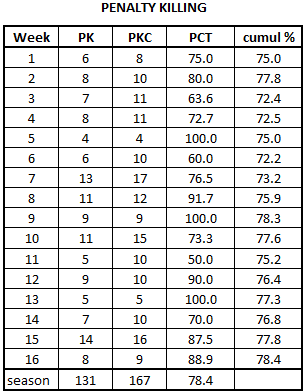 By now, we know that the Caps just are not very good at this aspect of the game.  Week 16 was no exception.  It was, in fact, typical – a 46.3 winning percentage week in a season in which they are winning 46.4 percent of their draws.  For the week, they won one zone in one game (they were 11-for-18 in the defensive zone against Nashville).  Otherwise the Caps lost all three zones for the week and won more than 50 percent only against Nashville (30-for-58).

One might look at the offensive zone performance as a factor in the low offensive production for the week.  The Caps won only 22 of 53 offensive zone draws (41.5 percent), and no Capital taking more than three draws finished the week over 50 percent in the offensive end.

The odd part of the week from an individual standpoint was the performance of Evgeny Kuznetsov.  He has had a season-long antagonistic relationship to faceoffs, it seems, but in Week 16 he was 50 percent in the offensive end and 54.5 percent in the defensive end.  That is progress.  But he did finish the week under water (42.4 percent overall) one of four skaters taking at least ten draws to do so.  Only Nic Dowd (9-for-15/60.0 percent) among that group finished at 50 percent or better. 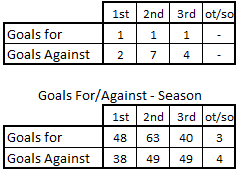 When a club scores only three goals and allows 13, the goals by period will not look good, and for the Caps they do not in Week 16.  The most troubling aspect of the week is that they were weakest in what was their strongest period this season.  They were outscored, 7-1, in the second periods of games, all of the goals allowed coming against St. Louis (three) and Nashville (four), blowing open what were (at least on the surface) competitive games.

That the Caps allowed 11 of their 13 goals allowed for the week in the second and third periods continues one of the more disturbing trends in this area.  They have been unable to finish well.  They have allowed only 38 first period goals this season (tied for sixth-fewest) and have a plus-10 goal differential.  But they have allowed 49 goals in each of the second and third periods of games (ranking tied for 12th and tied for 14th, respectively, in those categories), and only their impressive second periods to date (63 goals, third-most in the league) is keeping them from looking even worse as finishers. 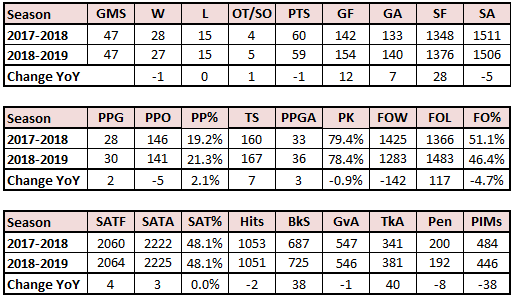 There are really few good things to say about Week 16, fewer that have much meaning to explain the current state of the club.  The Caps are not playing well, either in their performance numbers (wins, losses, goals scored and allowed) or their production numbers (shots, shot attempts taken and allowed).  Individually and collectively they look slow, sluggish, and distracted, almost what you or I might look like at work two weeks before we embark on an eagerly anticipated vacation.  The Caps cannot afford to coast into the All-Star Game, though.  At week’s end they find themselves looking up at the Islanders for the top spot in the Metro, but lurking under the surface is the fact that they are only five points ahead of (and with a game in hand on) the Buffalo Sabres who occupy the first non-playoff qualifying position.  It is not the best place to be for the defending champs.