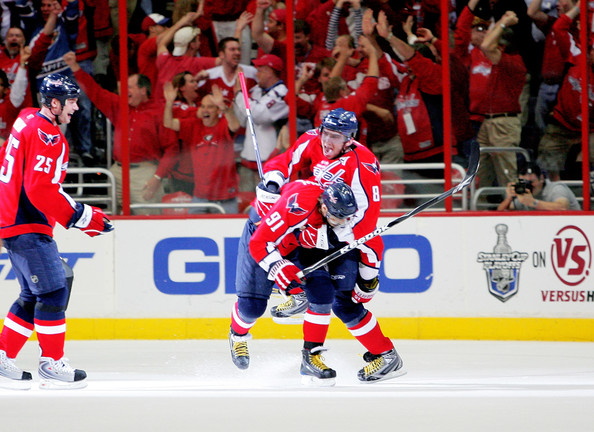 When Washington Capitals General Manager George McPhee woke on the morning of February 26, 2008, his Capitals were fighting for their playoff lives.  It was an unexpected development, given that the Caps started the season going 3-13-1 to finish October after starting the schedule with a three-game winning streak, firing their coach on Thanksgiving, and finding themselves in last place in the Eastern Conference on December 28th.

But on February 26th – trading deadline day – McPhee’s Capitals were 14-8-3 since finding themselves in last place in the East and had closed to within five points of both the Southeast Division leading Carolina Hurricanes and the eighth place in the conference Philadelphia Flyers.  Instead of sellers at the trading deadline, looking to next season, the Caps were looking to add pieces to validate the hope that the push in the 2009 portion of the season sparked.

And so it was that McPhee, looking to add experience to a squad brimming in talent but yet quite green, pulled the trigger on a trade that sent defenseman prospect Theo Ruth to the Columbus Blue Jackets for 17-year veteran Sergei Fedorov.  Having appeared in almost 1,200 regular season games and another 162 in the postseason – almost as many as the combined total of the Washington roster of skaters (169) -- Fedorov was the embodiment of experience.  More to the point, of those 169 games of postseason experience on the Caps’ roster, 60 games of that experience was on the bench, injured (Michael Nylander and Brian Pothier).  They needed veteran contributions.

Fedorov provided both a spark (2-11-13 in 18 games) and a steadying influence on the “Young Guns” -- Alex Ovechkin, Nicklas Backstrom, Alexander Semin, and Mike Green.  While his presence no doubt contributed to the Caps’ amazing stretch run that saw them go 11-1-0 to close the season and reach the playoffs, it was not enough to get the Caps over the hump of the first round of the playoffs and the Philadelphia Flyers, to whom they lost in seven games.

It was, as they say, a learning experience.  It was one that the Caps put to good use in the 2008-2009 season.  Fedorov returned to the Caps to fill the role of second line center behind Nicklas Backstrom, and although injuries limited him to 52 games, Fedorov was still top ten on the club in goals, assists, and points, going 11-22-33 overall.  It helped the Caps finish the season with a 50-24-8 record, the first time they finished a season with 50 wins since the 1985-1986 season and only the second time in franchise history that they did so.

Their Southeast Division championship and second-place finish in the Eastern Conference earned the Caps a first round playoff matchup with the New York Rangers, a foe of long standing from their Patrick Division days, but one they had not met in the postseason since falling in five games to the eventual Stanley Cup champions in 1994.  The Caps took the 2008-2009 season series against the Blueshirts, but that outcome is a bit deceiving.  Three of the four games were decided by one goal, two of them in extra time, the clubs splitting those decisions.  The fourth decision, a 3-1 win by the Caps, featured an empty net goal by Semin.  These were two evenly matched clubs.

It was not an evenly matched series at the start, though.  The Rangers delivered a serious blow to the Caps’ chances of advancing to the second round when they took Games 1 and 2 at Verizon Center in Washington.  It did not get a lot better for Washington when they split two games at Madison Square Garden in New York to leave them in a 1-3 deficit in games.  They did, however, have the potential of playing two of their last three games at home, should it come to that.  It did.  They shutout New York, 4-0, in Game 5 at home, then went back to New York and beat the Rangers, 5-3, to force a Game 7 in Washington.

The teams continued to play things tight to the vest in the second period, the Caps finishing the middle 20 minutes with nine shots but holding the Rangers to only six.  Neither team could take the lead.  In the third period, things changed, but only to a point.  The Caps rattled the Ranger cage with shots in machine gun fashion – four in a space of 1:36 early in the period, another three over a 1:32 span a few minutes later.  The Rangers did not get their first shot on goal until the 9:29 mark.  But that shot seemed to silence the Caps as well.  Staring at the 7:55 mark of the period, the Caps went the next seven minutes without a shot on goal.

What happened next changed that.  The Rangers were in their own end looking for a line change.  Derek Morris held the puck in the faceoff circle to the left of goalie Henrik Lundqvist.  He had an open passing lane up ice and sent the puck to Sean Avery circling just outside the Caps’ blue line.  Avery curled into the offensive zone and left the puck for Brandon Dubinsky trailing the play while the Rangers swapped out what players they could.  Dubinsky wrong-footed a shot that missed on the far side of Caps goalie Semyon Varlamov, the puck skittering off into the corner and up the wall where the Caps’ Matt Bradley was looking to get off the ice himself.

Facing the wall just inside his own blue line, Bradley collected the puck and backhanded it to Sergei Fedorov heading up ice.  Fedorov sped out of the zone and down the right wing, backing off Ranger defenseman Wade Redden.  With Redden trying to maintain position that would keep Fedorov to the outside, Fedorov carried the puck to the right wing circle, then slammed on the brakes, opening up a bit of daylight between Redden and himself as Redden tried to stop and gather himself.  It was just enough of an opening for Fedorov to fire a laser of a blast that caught Lundqvist dropping into his defensive posture a half-second too soon.  The shot sailed over Lundqvist’s glove and into the top of the net, and the arena exploded as Alex Ovechkin tackled Fedorov in celebration along the boards with just 4:59 left to play.

The Caps did not merely hold on in that last 4:59, they held the Rangers without a shot on goal and limited them to a single shot for the entire third period, outshooting them 13-1.  But it was the one goal from the stick of the wily veteran Fedorov that made the difference and justified the trade made by the Caps more than a year before that moment.

For Capitals fans, it was a special moment.  For years, Fedorov, while he did not face the Capitals often as a member of the Detroit Red Wings, made life for the Caps a special kind of hell when he did.  There was the time in 1996 when he became the first Red Wing in more than half a century to score five goals in a game, torching the Caps for five goals, including the overtime winner, in a 5-4 win.  There was the Stanley Cup final in 1998 when he recorded the game-winning goal in Game 3 to put the Caps on the brink of elimination, then assisted on the Red Wings’ first goal 150 seconds into Game 4 to help propel them to a 4-1 win and a sweep of the Capitals.

For Fedorov as a Capital, it would be the only goal that he would score in the 2009 postseason, and it would be his last goal in the NHL.  He returned to Russia the following season, leaving a hole in the second line center position that the Capitals spent years trying to fill.  In all those years, as difficult as it was to fill that void, there was still the memory of that one last and memorable goal from a legend, that sent an arena into a frenzy and the Capitals into the second round of the playoffs.

It's quarter to three,
There's no one in the place 'cept you and me
So set 'em' up joe
I got a little story I think you oughtta know