Is NHL Expansion a Done Deal?

Well, the Four-Letter Network seems to think so, or so one might one interpret when perusing their NHL team schedule pages.  We were looking at the Caps' 2015-2016 schedule, and when pulling down a menu to select teams, found this... 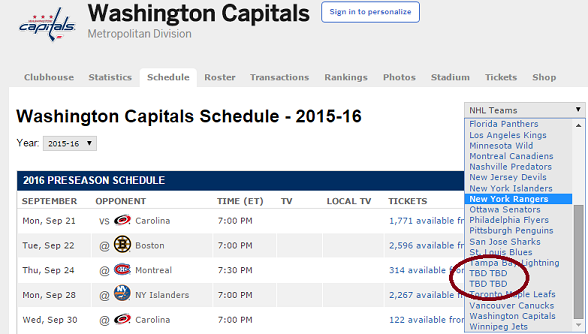 Posted by The Peerless at 11:31 AM No comments: 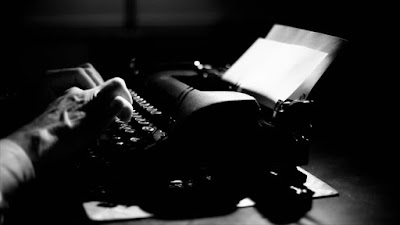 Today is our tenth anniversary in this space.  This is our 3,941st post (we counted…Cheerless ran out of toes along the way).

We’ve seen and written about some bad hockey and some great hockey, some disappointments and some pleasant surprises, the periodic table of the elements and all-alphabet teams.  We've watched and written about Capitals from "Alzner" to "Zubrus," from Alex Ovechkin (832 regular season and playoff games) to Jonas Johansson (one game, four minutes on ice).

There were some posts that seemed to get more than their share of attention over the years. In no particular order, the top half dozen in page views over the last ten years include…

In the aftermath of the 2011 Winter Classic in Pittsburgh, a fair amount of attention was being paid to the hit by David Steckel on Sidney Crosby that started the concussion problems that would affect Crosby's participation in games over the next two seasons.  The subtext to the whole matter was whether the hit was intentional at worst or avoidable at best.  We set out to debunk those notions.

“A Tale of Two Stories”

This was one of those cases of being an example of the saying, “where you stand depends upon where you sit.”  Same media personality expounding on two athletes in similar situations, with very different takes.

We never would have imagined that so few words would get so many views.  All it was, was a quote from New Jersey Devils goaltender Martin Brodeur commenting on losing a shot from John Carlson in a sea of red and “not (being) used to playing in a building like that,” meaning Verizon Center.

“How the Game is Played: Who is the Most Influential Person in the Post-Lockout Era?”

When the Caps blew a 3-1 lead (again!) to lose the 2010 opening round playoff series to the Montreal Canadiens, it was due in no small part to the astonishing performance of Canadiens goaltender Jaroslav Halak.  His performance in Games 5-7 in that series might have altered the very trajectory of how the game was (and is) played in the NHL.

We wrote this as the NHL was emerging from its 2012-2013 lockout, it second lockout in eight years and third in less than 20 years.  It was the most commented-on post in the ten years we have been doing this and is the second most viewed post we have had.

This is the mother of all posts in our ten-year history, the most viewed and by a wide margin.  Even today, almost two years since we wrote it, it shows up among the most viewed posts on a month-to-month basis.  Maybe it’s the dogs.  Everybody likes dogs.

And there you have it.  We thank all of you who have stopped by from time to time to read our scribbles, and we hope that there are a lot of posts ahead.  We would sure like to do one someday that says, “Finally!”  And I think all of you know what that might refer to.  Something about a silver chalice and a parade.

Until then, though, on behalf of Fearless and Cheerless, and all the other characters who have been a part of these posts, thanks for all of your support.