We’ve covered just about everyone who played in a significant number of games this year for the Capitals, but there are ten more players who played significant roles in their own ways…

The Hershey Bears have been the Capitals’ American Hockey League affiliate since the 2005-2006 season, renewing a relationship that ended 21 years earlier. In the five seasons since, the teams have developed the kind of relationship whereby holes that occur in the Capitals’ lineup can be filled – often more than adequately – by calling upon the Bears for substitutes. That drive down Route 15 was more than helpful at times this year, no more so than in calling upon a trio of players who played important roles for the Bears.

Keith Aucoin and Alexandre Giroux finished one-two in scoring in the AHL this season, and Jay Beagle chipped in 16 goals and 35 points in 66 games. All three had some experience in the NHL coming into this season, Aucoin the veteran of 65 NHL games, Giroux 22, and Beagle seven (four of those coming in the 2009 playoffs).

One might be forgiven for thinking, in light of their modest experience (a combined 10-17-27, plus-1), that calling them up would result in a drop off in performance. The fact is, both individually and as a group, these three players made their contributions. Combined, they totaled 3-7-10, even, in 25 games. Not first-line performance, perhaps, but it was certainly good enough given the approximately 10 minutes a game that these three players averaged in their time spent with the Capitals.

Only one of these three players saw action after the first of the new calendar year (Beagle, on April 6th), and it is unlikely that any of them would seem much in the way of consistent ice time for the Caps going forward (Giroux is a UFA, Beagle and RFA, and Aucoin has two more seasons on his current contract), but this past season this group did help the Caps get off to a good start.

There were four Capitals prospects whose combined appearances this year amounted to almost exactly a full NHL season (81 games, to be precise). Mathieu Perreault, Karl Alzner, John Carlson, and Michael Neuvirth represent a good part of the future for the Caps. Perreault could one day be a top-six forward for this team, Alzner and Carlson are both virtually top-four locks, and Michal Neuvirth could push for the number one goaltending job before too long.

But this year, this quartet took a first step toward assuming a regular place on the roster. The skaters – Alzer, Carlson, and Perreault – played in a total of 64 games and were a combined 5-15-20, plus-13, while averaging more than 14 minutes of ice time a game. Despite their lack of experience, they finished even or better on the plus-minus ledger in 50 of 64 combined games.

What might be most noteworthy about this trio of skaters is that at least one of them appeared in 52 of the 82 games the Caps played – the idea of working younger players into the lineup over time. In those games, the Caps were 34-10-8, which works out to precisely the 54-15-13 pace the Caps played on for the entire regular season.

Carlson and Alzner also saw playoff action with Carlson appearing in all seven games the Caps played. He also finished tied for fourth in total points for the Caps (1-3-4) and was third on the club with a plus-6, all while getting more than 20 minutes a night in ice time.

Neuvirth had a season that doesn’t jump off the page, at least until you look at his numbers in context. And that context is his peer group of rookie goaltenders. Among the 20 rookies tending goal this season in at least one game, Neuvirth finished sixth in wins (nine), ninth in goals-against average (2.75, which was fifth among rookie goalies appearing in at least ten games), and eighth in save percentage (.914, third behind Tuukka Rask and Jimmy Howard among rookie goaltenders appearing in at least ten games).

What Neuvirth also had, though, was an odd end to the NHL portion of his season. He was undefeated in his last ten appearances, but he was wildly inconsistent. He started three games in which he did not finish and did not earn a decision, with a goals against average of 7.94 and a save percentage of .773. In a fourth game he relieved Jose Theodore, stopping all 11 shots he faced in the third period of a 7-2 win over the New York Islanders on January 26th. Otherwise, he was 6-0-0 in that stretch, 1.50, .957, and did not allow more than two goals in any game.

As a group, these four players have barely 100 games of NHL experience among them. Next year, Caps fans will hope that all of the skaters will play in at least 100 games apiece and that Neuvirth will perhaps get his share of games in a rotation with fellow prospect goaltender Semyon Varlamov.

At the trading deadline, the Caps acquired four players, three of whom would take their places in the lineup immediately (defenseman Milan Jurcina, obtained from Columbus, was recovering from surgery for a sports hernia). Eric Belanger, Joe Corvo, and Scott Walker were brought aboard to provide some added depth down the middle, penalty killing and faceoff skill (Belanger); another puck-moving defenseman who could help out on the power play (Corvo); and some playoff experience and grit (Walker).

As a group, the trio played in 44 games, going 6-9-15, even, in the process with an average of 14:30 in ice time a night among them. But frankly, it was not the regular season for which these three players were obtained. And ultimately, this was a series of trades of limited return, despite the relatively low price they exacted from the Caps.

Bringing Belanger, Corvo, and Walker to Washington cost the Caps a soon-to-be free agent defenseman (Brian Pothier), a prospect (Oskar Osala), and three draft picks (two seconds and a seventh). But even with the low price to obtain them, the performance of these three players in the playoffs did not appear to justify the investment.

Of the three, Belanger probably had the best playoff series for the talents the Caps were looking for. In the seven games Belanger finished with a only a single assist, only six shots on goal and only three of those coming in the last six games. But he also was on the ice for only three goals of the 20 the Canadiens scored in the series (two of the six power play goals Montreal scored in the series). Belanger also won 76 of 114 draws, his 66.7 percent winning percentage still leading all players in the playoffs who have taken at least 100 draws. He finished at 50 percent or higher in each of the seven games.

Joe Corvo seemed to struggle from the start of his stay in Washington. In 18 games, he was a plus player only once, and that was against the less-than-fearsome Atlanta Thrashers in the next to last game of the regular season. He managed a goal and two assists on the power play, although his getting 1:30 in average power play ice time per game was perhaps not the level of relief for Mike Green that many might have envisioned. But in seven playoff games Corvo’s game deteriorated substantially. He finished 1-1-2, but did not register a point in his last five games, despite recording 19 shots on goal (ten in Game 6 alone). He was given more power play time in the playoffs, almost doubling his ice time with the man advantage (from 1:30 a game to 2:55). But he did less with it, failing to register a power play point. On the other side, Corvo’s even strength ice time was cut by more than three minutes a game (from 17:14 to 13:54), perhaps not surprising given that he was on the ice for four of the 14 even strength goals the Canadiens scored in the series (and two of the last three).

Scott Walker’s problem wasn’t so much performance as it was getting a chance to perform. He potted two goals (including the game-winner) in his first appearance with the Caps after the trade with Carolina, a 5-4 win over Tampa Bay. After that, he would get eight more regular season appearances in which he recorded a single assist and went minus-1, clearing the ten-minute ice time mark only three times. And that was the good part. In the playoffs, he would not dress for the first six games of the Montreal series. He would get an opportunity in Game 7, but skated only 6:47 and only two shifts in the third period as the Caps came up one goal short of advancing to the next round.

A month out from the start of the free agent signing period, it is not clear which of the three hired guns the Caps will want to hire for the 2010-2011 season. Combined, the three earned $6.9 million last year. The problems that the Caps have in terms of depth at center could mean a return for Eric Belanger. It seems doubtful that either Corvo or Walker will be brought back. But the price to take these three out for a test drive was not steep in this respect. Since 2000, the Caps have had 14 second round draft picks. Of that number, four have played in at least one game for the Caps (Matt Pettinger, Jakub Cutta, Chris Bourque, and Michal Neuvirth). and only Neuvirth among this group can reasonably be thought of as having the potential for a long NHL career. The Caps did not give up much in terms of likely contributors, given their drafting history, and the one prospect they gave up – Oskar Osala – might or might not become a regular NHL player.

The best that can be said about the hired guns is that it could have been worse.
Posted by The Peerless at 10:26 PM No comments:

Email ThisBlogThis!Share to TwitterShare to FacebookShare to Pinterest
Labels: the peerless prognosticator, the tens 2009-2010, Washington Capitals 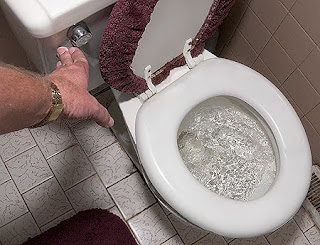 "The Pittsburgh Penguins are looking for 250 students to help with an important task and there's only one major requirement: You must know how to flush a toilet."

We don't make this stuff up, folks.
Posted by The Peerless at 6:54 PM 5 comments: