Washington Capitals: The End of the McPhee Era 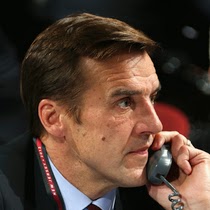 It is not often one finds symmetry in sports.  Games are about flow and momentum.  On Saturday, however, the Washington Capitals had a moment that reflected a certain symmetry in the arc of their history.  The club announced that General Manager George McPhee and Head Coach Adam Oates would not be returning in their roles for the 2013-2014 season.

In 16 seasons with the Capitals, McPhee was the overseer of a club that won 613 regular season games.  The club reached the post season ten times, advancing as far as the Stanley Cup final in 1998, in his first season with the club.  It would not, however, advance that far again, nor would it so much as reach a conference final.

There are a lot of Capitals fans who are happy over the change at the top with respect to McPhee and Oates, but we cannot help but think that in the case of McPhee the matter is more complicated.  It started complicated, in fact.  McPhee took over an aging team that was quietly slipping into the middle of the pack despite a long run of post season appearances.  The 75-point finish in 1996-1997 was merely the period at the end of the sentence that led to the dismissals of David Poile and Jim Schoenfeld.  Only five seasons earlier the Caps were a 98-point team, but then the slide started.  The Caps slipped to 93 points the next season, then 88, then a 52-point season in the abbreviated 48-game season of 1994-1995 (about an 88-point pace), then 89 points the following year before sliding all the way out of the playoffs in 1996-1997 and ushering in the changes.

McPhee put his stamp on that 1997-1998 club with late season deals that brought Brian Bellows and Esa Tikkanen to the club for a stretch run in which the Caps finished 8-1-2, momentum that they carried into a post-season that would be the most successful in franchise history.  In that year and those since, the Washington Capitals have been an extension of George McPhee more than any other individual in the organization…

As one might expect in such a long tenure, and given the uncertainty that attaches to so much in sports when it comes to the outcomes of management decisions, McPhee’s record with the Capitals has it highs and its lows.  The draft history of the club is uneven.  Eighteen of 21 first round picks in the McPhee era reached the NHL with Andre Burakowsky projected to make the big club in short order after his selection in 2013.  Eleven of those picks have played in more than 250 NHL games.  However, he might be remembered more for the misses than the hits – Anton Gustafsson and Sasha Pokulok were first round picks who never dressed in an NHL game, and Joe Finley never played for the Capitals after his first round selection in 2005.

The other side of that coin is that only 29 of 114 draft picks after the first round ever made it to the NHL, only three of whom played more than 250 games, two of them (Krys Barch and Johnny Oduya) playing none of those games with the Caps.  Matt Pettinger played 334 of his 422 career games in the NHL with Washington.  And for a team whose philosophy includes building from the draft, the roster that took the ice for the last game of the 2013-2014 season was conspicuous for the players, specifically forwards, who came to the Caps by other means.

Two thirds of what was their best line for much of the season – Joel Ward, Jason Chimera, and Eric Fehr – came from other places, Ward as a free agent from Nashville in 2011 and Chimera from Columbus in a 2009 trade.  Even Fehr, originally drafted by the Caps in 2003, came to the Caps as a free agent after leaving the club via trade in 2011.  A second line of Jay Beagle, Dustin Penner, and Troy Brouwer all came to the Caps by means other than the draft.  The fourth line in that last game might have been called the “Promise Line” with drafted forwards Evgeny Kuznetsov and Tom Wilson, but their best days are perhaps some years ahead of them.

The defense suffered from a strange bi-polar quality to it.  On the one hand there were the Karl Alzner/John Carlson and Mike Green/Dmitry Orlov pairs, both of which constituted all draft picks.  That third pair, though.  The Caps rotated ten different defensemen through that last pairing over the course of the season with a combined total of 204 man-games.  And of that group only two – Connor Carrick and Patrick Wey – were drafted by the club.  Given that five defensemen drafted in the first or second round between 2005 and 2008 never played a game for the Caps (Sasha Pokulok, Joe Finley, Keith Seabrook, Josh Godfrey, and Eric Mestery), that is a not too surprising result and will be a lasting part of McPhee’s legacy.

There also were the perennial problems, filling the second line center role and finding a defenseman who could reliably defend, what is often described as the “stay at home” type.  As to the former, the Caps paid only intermittent attention to the position through the draft.  After selecting Nicklas Backstrom with the fourth overall pick in 2006 the Caps did spend a first round pick on a center in three consecutive years: Anton Gustafsson in 2008, Marcus Johansson in 2009, and Evgeny Kuznetsov in 2010.  That it hasn’t worked out, at least in terms of finding a suitable center to back up Backstrom, is to be charitable.  Gustafsson never played in the NHL, and both Johansson and Kuznetsov appear to be destined to be wingers in the NHL.

That left McPhee to patch holes, primarily at trading deadline time.  Sergei Fedorov in 2008 (after Michael Nylander was injured and missed the last three months of the regular season), Eric Belanger in 2010, and Jason Arnott in 2011 were short term fixes (only Fedorov played another season with the club).  McPhee tried to solve the problem in a more permanent way by trading futures (Cody Eakin) for a proven player at the position (Mike Ribeiro) in June 2012, but that lasted only one abbreviated season.  This year it was signing Mikhail Grabovski as a free agent on a discounted deal (quite a good one for the club, in fact), but the player’s future with the team is in doubt as he is once more a free agent..

The defense has been a work that always seems to be in progress.  Part of the problem is circumstantial, the serial injuries to Mike Green being foremost in that category.  The third pair carousel this past season was another dimension of the problem, though.  The Caps have a large gap in their developmental conveyor, those five first and second round draft picks identified above constituting that hole.  As a result, the Caps rotated a series of free agents through that pair this past season – Steve Oleksy, Nate Schmidt, Julien Brouillette, Jack Hillen, Cameron Schilling, Tyson Strachan.

One of the most enduringly curious patterns in the McPhee era was in his choices for head coach.  All five of his hires were first-time NHL head coaches.  Three of them – Bruce Cassidy, Glen Hanlon, and Bruce Boudreau – had head coaching experience in the AHL.  The last two – Dale Hunter and Adam Oates – had no professional head coaching experience.  Of the four coaches eventually dismissed by McPhee, only Boudreau has taken another NHL head coaching position (Anaheim).  Cassidy is the head coach of the Providence Bruins in the AHL, Hanlon is head coach of the Belarusian national ice hockey team, and Hunter returned to London, Ontario, to resume his duties as president and head coach of the Knights of the Ontario Hockey League.  As a group that quintet won 421 of 868 games, Boudreau accounting for almost half the win total (201).

What gets lost sometimes, though, is that McPhee was the steward of the 2003-2008 rebuild.  That in itself was a risky endeavor, essentially gutting the team during and after the 2003-2004 season to stockpile draft picks and prospects.  Out of that came Alex Ovechkin, Mike Green, Jeff Schultz, Shaone Morrisonn, Tomas Fleischmann, Brooks Laich, and Semyon Varlamov, all of whom would play important roles as the Caps returned to respectability and eventually won a Presidents Trophy.  But here, too, there were gaps.  Trading the then league leading scorer (Robert Lang) for a prospect (Fleischmann) and draft picks (one of whom was Green), or Brendan Witt for Kris Beech and a draft pick that would become Varlamov stand out as wins.  Mike Grier for Jakub Klepis, or Michael Nylander for draft picks that became Francois Bouchard and Patrick McNeill, not as much.

In the end, the word that comes to mind with respect to George McPhee’s tenure in Washington is “conflicted.”  On the one hand he was the administrator of an operation that for several years was on a short list of Stanley Cup contenders, not something that is said of a lot of franchises in the NHL.  And, Verizon Center is filled every night with a brand of hockey that has been, for the most part, entertaining since the 2004-2005 lockout.  These are not insignificant contributions to the history of the franchise or to the legacy of sports in Washington.  Hockey is established as a major sport in Washington in a way that it was not before McPhee’s arrival.

On the other hand, one has the haunting feeling of an opportunity squandered.  The Caps won a ping-pong ball drawing in 2004 to leap-frog two teams and get the number one pick in the 2004 draft, used to select Alex Ovechkin.  That was the easy part.  The hard part was always going to be what and how the Caps built around Ovechkin.  On that score the McPhee record is disappointing.  The club rarely had the depth or consistency to seriously challenge for a Stanley Cup despite Ovechkin’s routine appearance at the top of the league goal scoring rankings.  And when they did, in 2010, a first round playoff loss to the Montreal Canadiens resulted in some soul searching and re-engineering, especially when in the following season the club lost eight straight games with the cameras of HBO recording every sordid moment as part of it series chronicling the run-up to the 2011 Winter Classic.  From there the team slid slowly into also-ran status, a team that had to hustle just to make the playoffs and once there, lasting as long as the cherry blossoms.  The team, and McPhee, never recovered.

In June 1997 the announcement of the hiring of a new general manager and a new head coach came as a new arena was being built that would become the home of the Caps.  Saturday’s announcement came as the other major tenant of that building – the NBA’s Washington Wizards – were playing on and giving their fans the sense of hope Caps fans might have had 17 years ago.  It serves as a reminder that 17 years is a long time, especially in the business of sports management.  It also suggests that a new start for everyone -- the Caps, George McPhee, Adam Oates, the players, and even the fans -- was in order.  But before embarking on that new start, thanks is owed to George McPhee for working at one of the most stressful of occupations, one in which every move is watched and probed and second-guessed.  He did it with diligence and perseverance in search of a championship for Washington.  That he did not get there is not a reflection on his desire or his effort.  And for that, fans should stop for a moment and remember his 17 years here with some gratitude.

The Caps standings points percentage in the George McPhee era: .549.


Photo: Dave Sandford/NHL/Getty Images
Posted by The Peerless at 3:41 AM 3 comments: