In our second installment of the group of Washington Capitals for whom their only game with the Caps would be their only game in the NHL, we take a look at two players whose lone appearance came in the 1990’s. 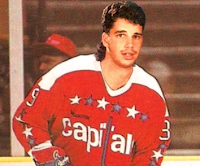 The fourth round of the 1987 NHL entry draft was an interesting one.  Three players who would eventually play for the Caps were drafted in that round.  Joe Sacco was drafted 71st overall by the Toronto Maple Leafs and made his way to the Caps late in his career, dressing for three seasons (1999-2000 through 2001-2002).  Kip Miller was taken by the Quebec Nordiques with the next pick and found his way to Washington for the last two seasons of his career (2002-2003 and 2003-2004).  Terry Yake was taken 81st overall in the fourth round of that draft, playing for four franchises before settling with the Caps in the last two seasons of his career (1999-2000 and 2000-2001).  Among them, they played 399 regular season games for the Caps and 1,590 regular season games in the their respective NHL careers.  And there was Mike Sullivan, taken 69th overall by the New York Rangers, who dressed for 709 regular season games with four teams.  None of them were the Caps, but Caps fans remember him vividly as the current coach of the Pittsburgh Penguins.

Center Tyler Larter was taken by the Caps 78th overall in the fourth round of that draft after completing a successful third season with the Sault Ste. Marie Greyhounds of the Ontario Hockey League.  In 1986-1987 he exceeded the combined total of goals he scored in the previous two seasons (29 in 124 games) and almost matched his combined point total of the previous two seasons (95), going 34-59-93 in 59 games.  In the season after he was drafted by the Caps, he improved again, going 44-65-109 in 65 games with the Greyhounds.

Larter turned pro following that 1987-1988 season in the OHL, moving up to the Baltimore Skipjacks in the AHL the next season.  In 71 games he went 9-19-28, but he also logged 189 penalty minutes, what would be a career high for him at any level of hockey.  His offensive production improved to start his second season in Baltimore, enough to earn him a call-up for a game on Long Island against the New York Islanders in early February.  It was a difficult night for the Caps, who fell behind, 3-0, in the first 27 minutes.  They crawled back within a goal twice, but New York scored an empty-net goal in the last minute for a 5-3 win that broke a three-game Caps winning streak.  Larter did not record a point, finishing minus-1 with two shots on goal.

Two days later, he was returned to Baltimore, where he finished the season 31-36-67 in 79 games.  He added another five goals and 11 points in 12 postseason games for the Skipjacks.  That would be the beginning and end of his NHL journey, but he was not done traveling.  In May 1991 he was traded to the Winnipeg Jets with forward Bob Joyce and defenseman Kent Paynter for forwards Craig Duncanson, Brent Hughes and Simon Wheeldon, none of whom ever dressed for the Caps.  Larter would be claimed off the Winnipeg roster by the Minnesota North Stars in the 1991 expansion draft.

And here there is a bit of an odd connection with the Caps.  Larter was taken by the North Stars with the pick immediately preceding that of the San Jose Sharks.  The Sharks took former Capital Bengt-Ake Gustafsson with that pick, a player who had last played in the NHL in 1989 with the Caps.  Of the 20 players taken in that expansion draft, four never played in the NHL again.  Larter, Gustafsson, Jeff Madill (drafted by the Sharks from New Jersey), and Guy Lafleur (drafted by Minnesota from Quebec).  Larter would later be traded back to Winnipeg by Minnesota, but he would spend the remainder of his career in minor league hockey and Europe, leaving the sport after the 1993-1994 season with the Whitley Warriors in Great Britain.

Ken Lovsin took a bit of an unconventional route to his lone NHL appearance.  After a couple of college seasons in Canada, he was taken in the 1987 NHL supplemental draft (sixth overall by the Hartford Whalers).  Of the 20 players taken in that draft, only six would reach the NHL, Lovsin being one of them and the only one of the six to appear in just one NHL game.

He would never move up the development ladder with Hartford and was signed by the Caps as a free agent in July 1990. He was a late reassignment out of training camp to the Baltimore Skipjacks in the AHL, but he received a holiday present of sorts in late December.  Lovsin got a sweater for the Caps in their December 26th meeting against the Pittsburgh Penguins at Capital Centre.  This is where the “of sorts” part of that present comes into play.  The Caps were lit up for five goals in the first 12:04 of the game and never really made a contest of it in a 7-3 loss that extended a winless streak to six games (0-5-1) and that would go on to reach eight (0-7-1), the Caps’ longest of the 1990-1991 season.

Lovsin did not record a point in that loss to Pittsburgh and was minus-2 with two shots on goal.  He returned to Baltimore where he completed the 1990-1991 season (8-28-36 in 79 games) and played the 1991-1992 season (11-24-35 in 77 gamers).  That would be all for his career in North America, though.  He did play in Sweden for a season with Mora IK and represented Canada internationally in 1993 and 1994 before his career ended at age 27.  Your odd Ken Lovsin fact is that he is one of seven Capitals to wear the number “37,” the last of whom was Capitals icon goalie Olaf Kolzig.

Next, we’ll take a look at the trio of one-gamers who made their appearance in ‘The Rebuild.”