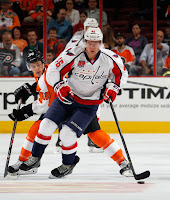 “If the power to do hard work is not a skill, it's the best possible substitute for it.”
-- James A. Garfield

If you hear the words, “Last Man Standing,” you might think of a television sit-com.  However, if you are a fan of the Washington Capitals, you might think, “Michael Latta.”  As in, the last man standing in Washington after the Great Train Birdbrain Lamebrain Featherbrain Bloodstain Disdain Impossible-to-Explain Excruciating-Pain Scatterbrain Painful-Eye-Strain Robbery of 2013.  Washington prospect Filip Forsbrg was sent to Nashville in the trade, Martin Erat (the principal object of return for the Caps in the deal) lasted 66 regular season and playoff games over two seasons before being shipped off to Phoenix for a defenseman (Rostislav Klesla) they quickly trade for a goalie (Jaroslav Halak) that they subsequently lost in free agency, and a prospect who is still in the AHL (Chris Brown).

So much noise, so little music.

Except that Michael Latta is the type of player who can make a lot of noise, of the sort that clanging pots make or cartoon explosions.  He is, to be polite about it, a feisty sort.  In 70 games over two seasons with the Caps, he has 80 penalty minutes, 50 of those minutes coming in ten fighting majors.  In 2014-2015 those numbers were 68 minutes in total, 40 of them coming on eight bouts.

To call Latta a “role player” is perhaps a bit generous.  Among 13 Capitals forwards appearing in at least 50 games, Latta had the lowest ice time per game (8:44).  That level of participation was not conducive to big numbers.  For example, among those 13 forwards, Latta finished…
He was one of two Capitals forwards in that group without a game-winning goal (Tom Wilson was the other).  He was one of three forwards without a special teams point (Wilson and Jason Chimera were the others).  That ice time was a factor.  His 42 games logging 10 or fewer minutes almost doubled the next highest total on the club (Wilson: 26).

We do not mean to denigrate Latta’s performance or his game.  Like the closing line in Milton’s sonnet, “On His Blindness,” they also serve who only stand and wait.  The Caps did have a 4-1-0 record when he recorded a point and a 9-0-2 record when he skated 10 or more minutes. 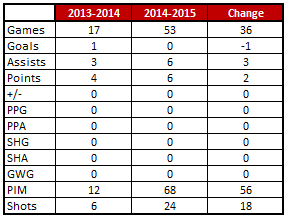 Fearless’ Take: Latta's contributions in the rougher edges of the game had some meaning.  The Caps were 6-2-0 in games in which he had a fighting major, and they were 8-3-2 in the 13 games in which his hits differential (hits recorded less hits taken) was plus-2 or better (numbers from war-on-ice.com).

Odd Latta Fact: 357 forwards appeared in at least 50 games in the NHL in 2014-2015.  Only Michael Latta among them did not record a goal.  Only Columbus' Corey Tropp recorded fewer shots on goal (22) than Latta (24) in that group, but he did have a goal.  Latta had to close with a rush (that term being relative) to get to “24” (a "meh" week's worth of shots for Alex Ovechkin).  He had six shots over the last ten games in which he appeared.  He did not record a shot in 34 of his 53 games. Maybe Marcus Johansson can give him tips.

Game to Remember: December 18th versus Columbus.  When the Capitals headed to Columbus for their December 18th contest, they were fresh off a 20-round shootout loss to the Florida Panthers.  While it was just their second loss in their previous six games, neither of them in regulation, getting back on a winning track was the goal.  Washington split their first two meetings with the Blue Jackets, but this would be the first meeting of the season in Ohio.  It would end up being something of a wild and woolly affair.

Washington opened the scoring mid-way through the first period on a Joel Ward goal.  In the last minute of the period the Caps doubled their advantage on what was a play by Latta worthy of Nicklas Backstrom.  Just after the Caps killed a Columbus power play, the Caps had a faceoff in the Blue Jackets’ end.  Latta won the draw from Ryan Johansen back to John Carlson.  A shot from Carlson was blocked, but the puck came out to Brooks Orpik at the left point.  He one timed a shot-pass to Latta, who set up at the top of the crease to goalie Sergei Bobrovsky’s right.  In one motion, Latta accepted the pass, then backhanded the puck across the crease to Jason Chimera for a tap-in goal.

Columbus took a 3-2 lead early in the third period and had the Caps on their heels.  The Caps tied the game on a somewhat accidental play involving Latta.  Chimera took a pass from Jay Beagle in the Caps’ end and skated the puck up the left wing.  As he was approaching the Columbus blue line, he laid it off to Latta in the middle.  Latta skated in and tried to curl off, but he had the puck poked off his stick when three Blue Jacket defenders converged on him.  With that many defenders on one player, the loose puck was in open ice where Karl Alzner picked it up, skated in, and fired it past Bobrovsky.  The Caps would need those two points from Latta – his first two-point game in the NHL – in what would end as a 5-4 Gimmick win.

Game to Forget: January 16th versus Nashville.  When the Caps flew into Nashville on January 16th, it would mark the first opportunity for Latta to face the team that traded him away.  It did not go nearly as well for Latta, coach Barry Trotz (also facing the Predators for the first time since he left as head coach), or the Caps.  Latta had barely eight minutes of ice time and only two shifts in the third period.  The Caps blew a 3-2 lead in the last five minutes after spotting the Predators two goals to open the game, the dagger coming off a brutal giveaway by Matt Niskanen with less than two minutes left.  The Caps lost, 4-3.

There really is not much to say here.  Latta appeared in only four games – all in the first round – and had a total of 27:42 in ice time (John Carlson skated 29:10 in Game 7 of the second round against the New York Rangers).  Part of his absence was due to illness in the second round, but it was an iffy proposition on a night-to-night basis whether he would be called upon to skate.

One cannot say it was an especially noteworthy year for Michael Latta.  Then again, of how many fourth liners might that be said in any year?  Last January, a famous hockey analyst and fashion icon called the New York Islanders’ fourth line “maybe the best fourth line ever in hockey.”  They were eliminated in the first round by the Capitals.  There are limits to what a fourth liner is going to contribute, just as there are limits in Latta’s game, at least in this, the early stage of his career.  What he does not possess in skill, he is going to have to replace with hard work.  Hard work is something that can be said to occupy Latta’s game this season.