“I have come to believe that the whole world is an enigma, a harmless enigma that is made terrible by our own mad attempt to interpret it as though it had an underlying truth.”
-- Umberto Eco

But 2020-2021 is a season he will not be memorializing his personal scrapbook.  After recording a goal and two assists in his first four games of the season, he missed eight games due to COVID-protocol.  He returned to perform sluggishly with a goal and two assists in seven games before missing two more games to an upper body injury.  He came back to post seven goals and 23 points in 30 games before heading back on the shelf for the last five games of the regular season with his second bout with COVID that carried into the postseason.  He finished 9-20-29, plus-7, in just 41 games played. 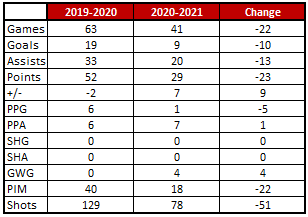 Fearless’ Take… Even with the 15 games missed, Evgeny Kuznetsov finished the regular season fifth on the club in points and in points per game.  And, unsurprisingly, when he scored, good things happened.  The Caps were 14-2-4 in the 20 games in which he recorded a point (6-0-1 in multi-point games) and 6-1-1 in games in which he scored a goal.

Cheerless’ Take… There were too many instances when Kuznetsov was in the lineup this season that he seemed invisible.  Natural Stat Trick captures a statistic – Individual Point Percentage -- the percentage of goals for that player's team while that player is on the ice that the player earned a point on.  In the last five seasons before this one, Kuznetsov’s IPP never dropped below 65 percent.  But this season it was 55.88 percent.  There were also the scoring chances/high danger scoring chances at 5-on-5 (iSCF/iHDCF in the Natural Stat Trick linked table), and those, even accounting for the fewer games played, were down for Kuznetsov.

Game to Remember… March 25, 2021 vs. New Jersey.  When the New Jersey Devils came to town for a late March game at Capital One Arena, the Caps were coming off a 3-1 loss to the New York Rangers that snapped a seven-game winning streak.  Over those seven games, Evgeny Kuznetsov recorded points in the last six, going 1-6-7, plus-8, perhaps his best sustained stretch of production for the season.  However, he was shutout in the loss to the Rangers, and the aim when the Devils came calling after a four-day layoff for the Caps was to get back on track.  The Devils drew first blood in the second minute of the first period, but the Caps tied it less than two minutes later on a Dmitry Orlov goal.  New Jersey regained the lead early in the second period, but Alex Ovechkin tied the game once more less than a minute later.  After that, it was Kuznetsov’s show.

Midway through the second period, Kuznetsov broke the tie using patience and skill.  The scoring sequence started when Alex Ovechkin took a pass from Brenden Dillon at the Devils’ blue line and skated down the right wing.  From the top of the circle he unleased a shot that handcuffed goalie Mackenzie Blackwood, the puck popping into the air. Kuznetsov collected the puck between the hash marks, but instead of shooting right away with a clot of players in front, he curled to his left to find a shooting angle and from a severe angle just outside the extended goal line to Blackwood’s right, he snapped a shot behind Blackwood’s back and in to make it a 3-2 game.  New Jersey tied the game for a third time mid-way through the final period, but just 62 seconds after the game-tying goal, Kuznetsov struck again.  It was a goal in the blink of an eye that illustrated his hand-eye skills.  With the Devils unable to clear the defensive zone, Justin Schultz took the puck along the right wing wall and threw the puck into the slot where Kuznetsov was waiting.  Kuznetsov just adjusted angle on the stick blade and redirected the puck toward the net where it struck the skate of a Devils defender and eluded Blackwood on the far side.  It would be the game-winning goal and seal Kuznetsov’s only two-goal game of the season.

Game to Forget… April 18, 2021 vs. Boston.  Although Evgeny Kuznetsov did receive votes in two seasons of his career for the Selke Trophy as the league’s top defensive forward, he is not generally known as a defensive stalwart.  But he had an especially difficult time in a mid-April game in Boston against the Bruins, at least in getting up close and personal looks at Bruin goals.  One might have predicted a difficult game when he was on the ice as Patrice Bergeron scored a shorthanded goal 12 minutes into the contest to open the scoring.  He got a close look at that one as Bergeron cut in front of him to grab a loose puck in the slot that he backhanded in as Kuznetsov tried to use his stick to corral Bergeron’s hands.

The Caps eventually made a game of it, taking a 3-2 lead before five minutes were gone in the second period, Kuznetsov assisting on one of the goals.  But Boston scored the last four goals – Kuznetsov being on ice for three of them (including an empty netter in the last two minutes) – in what would be a 6-3 loss to the Bruins.  Kuznetsov finished 0-1-1, with one shot on goal in 17 minutes and change of ice time and a 21.4 percent faceoff winning percentage (3-for-14, his worst of the season) and recorded a season-worst minus-4 for his effort.

Postseason… Kuznetsov as enigma extends to his postseason performance.  He ranks 11th in franchise history in games played (81), but he ranks fourth in goals (27), ninth in assists (35), fifth in points (62), tied for 17th in plus-minus rating (plus-5), 11th in points per game (0.77; minimum: 25 games), tied for ninth in power play goals (nine), tied for fifth in power play points (24), and tied for eighth in game-winning goals (four).  But his 2021 postseason was a disaster.  First, he appeared in only the last three of the five games in the Caps’ opening round loss to Boston, owing to his being sidelined with COVID for a second time this season (he also missed the last five games of the regular season).  Second, he did not record a goal despite eight shots on goal in those three games.  Third, he was held without a point despite averaging more than 21 minutes of ice time in the three games in which he played.  In his last 16 postseason games dating back to Game 3 of the 2019 Eastern Conference quarterfinal against Carolina, Kuznetsov is 4-4-9, minus-7, in 16 postseason games.

Looking ahead… All eyes seem to be on Kuznetsov and all attention being paid to the question of whether his future lies with another team.  He has four more years on an eight-year/$62.4 million contract that carries a $7.8 million cap hit.  He is a member of an odd cohort as far as compensation goes.  There are seven centers, age 27-32 (Kuznetsov is 29) with cap hits ranging from $7.0 million to $8.5 million.  It is a group that includes the oft-injured (Steven Stamkos) and the disappointing (Ryan Johansen, Kevin Hayes, and perhaps Kuznetsov).  The problem here is that since a 2017-2018 season in which he went 27-56-83 in the regular season and 12-19-31 in 24 playoff games on the way to the Stanley Cup, he is 49-104-153 in the regular season and 4-7-11 in 18 playoff games.  He has bounced around of the margins of “good,” but has more rarely displayed the high-end production his skill set and potential suggest.  On paper, he is a first line center on a contending team, but he has not played to that level, and these should be his prime years.

Can Evgeny Kuznetsov reignite the flame he seemed to have in 2017-2018 when he had his best NHL season and, not coincidentally, the Caps won their only Stanley Cup in team history?  One would like to think so, but three disappointing seasons removed from that season makes one wonder whether it is likely.  And a $7.8 million salary cap hit is a big bet on his being able to do that.  It puts the Caps in a difficult situation.  If he had not been disappointing the last three seasons, there would be no murmuring about whether to cut ties with him.  But if the Caps are entertaining offers for him, Capitals Nation had better be prepared that it is unlikely in the extreme that they will get equal value in terms of his potential as a player.  Is this a “he is what he is” moment, or is there one more chance left to play closer to his potential as a Capital?  Much of the summer for the Caps might be devoted to this question concerning the enigma that is Kuznetsov.