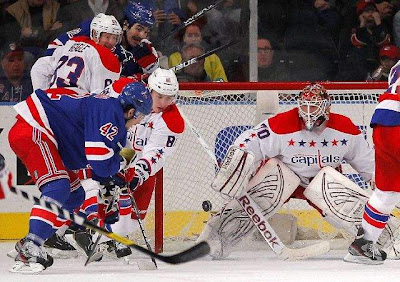 There are three numbers to keep in mind when thinking about Braden Holtby and his rapid ascent to what could be the number one goaltending position with the Washington Capitals when NHL hockey resumes in earnest: 22, 21, 14.

First, Braden Holtby is 22 years old (he will be 23 before the NHL resumes play). He was, by far, the youngest number one goalie in last year’s Stanley Cup playoffs (three years and 234 days younger than Los Angeles’ Jonathan Quick). Only five of 89 goaltenders having dressed for at least one regular season game last season were younger than Holtby (he shares the same date of birth as fellow Saskatchewanian and Tampa Bay goalie Dustin Tokarski).

Second, Holtby has a grand total of 21 regular season games on his resume over two seasons. That total ranks 29th in Washington Capitals franchise history among goaltenders, one behind Rollie Boutin and half as many as Michel Belhumeur (he of the no wins in his 42-game Capitals career). He does not have a lot of experience.

Third, Holtby has 14 games of playoff experience. That is already fifth in franchise history among goaltenders. Only Olaf Kolzig (45), Don Beaupre (36), Pete Peeters (30), and Semyon Varlamov (19) have more career playoff games played than Holtby for the Caps. Of the 17 goalies to have appeared in the postseason for the Caps, only Bob Mason has a lower goals-against average (1.75 to 1.95) and better save percentage (.937 to .935) than Holtby. Mason achieved his numbers in four games in the 1987 post-season, one of them a four-overtime loss. Holtby’s seven wins and 922 minutes played both rank fifth in franchise post-season history.

The point of all this is two-fold. He is young, but he has been tested more than most his age (at least with this organization) in the postseason crucible. What does that mean? Well, Holtby certainly has performed well, but there is an underlying theme in his early-career performance. And that can be summed up, perhaps, with one word.

Here is the thing. While Holtby has put up fine numbers (2.02, .929 in 21 regular season games; 1.95, .935 in 14 playoff games), he has fallen prey from time to time to the sort of thing one might expect from a young goalie. If his attention has not drifted in certain circumstances, his performance suggests such a thing. For example, let us first look at shots. Game management is as much a skill as stopping pucks at this level, and a goalie has to be able to cope not only with the obvious pressures of high shot volumes, but of low ones as well. Games in which the goalie sees only intermittent activity might lead the mind to wander, to lose focus. In 21 regular season games thus far for Holtby, his performance is not a lot different in low-volume, as opposed to high-volume games, but it is enough to suggest there is work to be done here (games ranked by shots faced): 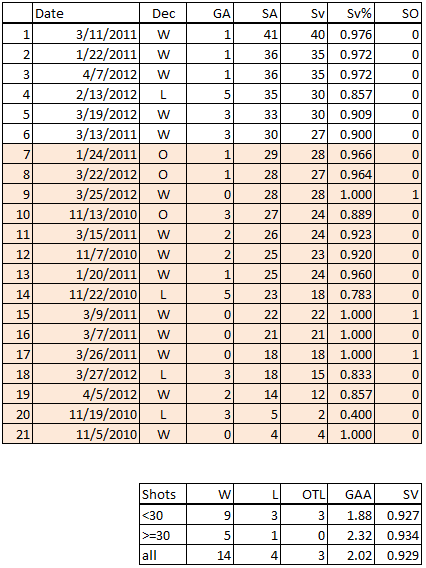 In six regular season appearances in which Holtby faced 30 or more shots, he has a very good 2.32 goals-against average, but even more important a .934 save percentage. On the flip side of that, in games in which he faced fewer than 30 shots, he has a GAA of 1.88, but that save percentage drops a bit to .927. The 1.88 is the outcome one looks for, but that lower save percentage is not necessarily an expected result. And, there is more than a whiff of inconsistency here. In the 15 instances in which he faced fewer than 30 shots he recorded all of his three career shutouts and had another instance in which he saved all 21 shots he faced in 45 minutes of action. But he also had five instances of having a game save percentage below .900 (he had one in six games in which he faced 30 or more shots). The takeaway here might be that with situations requiring a high level of focus (high shot volumes) he has performed remarkably well.

We are mindful that there is a low population of games from which to draw conclusions here, and this is more pronounced the playoffs. But in 14 playoff appearances (all last spring) the difference are greater. In ten appearances in which Holtby faced 30 or more shots, he had a 1.66 GAA and .948 save percentage. On the other hand, in those four appearances in which he faced fewer than 30 shots he had a GAA of 2.79 and a save percentage of .879 (games ranked by shots faced). 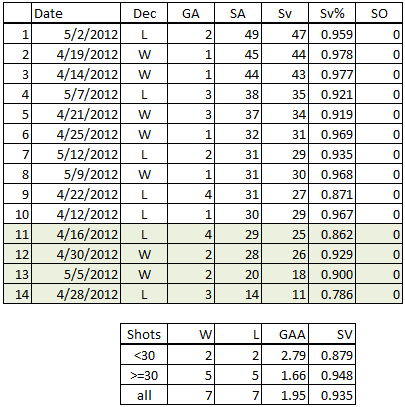 The differences here might be exacerbated by the different overtime format in the post-season – you play until someone scores, meaning that the longer goalies play past 60 minutes, it is all 1.000 save percentage as long as they do not give up a goal. But that brings us to a different look at Holtby’s performance thus far, his progression through games.

The playoffs are another story altogether. In his 14 postseason appearances Holtby has a sparkling .956 first period save percentage. However, this measure drops from one period to the next: to .942 in the second period, .912 in the third frame, and .907 in overtime. And it is not a function of shot volumes. In those 14 appearances Holtby faced 136 shots in the first period, 155 in the second, and 125 in the third. He faced 43 shots in overtime, which when applied against the minutes he played works out to approximately 139 shots over 14 20-minute periods. And, Holtby was 2-4 in overtime decisions.

Since 1980, 104 goalies have appeared in at least 250 career games. Of that group only four have a career save percentage above .920: Dominik Hasek, Tim Thomas, Henrik Lundqvist, and Pekka Rinne. Braden Holtby has a save percentage of .929 in his brief 21-game career. For those of you who think he will not regress toward a mean (and everyone’s “mean” is different), you are holding that belief up against the current of history. He will not sustain that level of efficiency. This is not to say that he cannot be, from time to time, a goalie with a .920 level of efficiency. He could do that and maintain a low goals against-average (it is 2.02 through 21 regular season games). To do that the team around him is going to have to limit shots; he would have to face 25.4 shots per game to maintain that GAA at a .920 save percentage as opposed to the 28.7 he has faced so far. But more than that, he is going to have to develop, nurture, and maintain one of the most elusive qualities anyone in any pursuit must have to be successful – focus.


photo: Reuters
Posted by The Peerless at 8:45 PM No comments: