The Peerless Prognosticator is ON THE AIR!!! -- Game 44: Senators at Capitals, January 7th

The Washington Capitals return to the Capital One Arena ice sheet on Tuesday night to host the Ottawa Senators.  On paper, this looks like a mismatch, the Caps on top of the league standings, and the Senators 14th in the 16-team Eastern Conference and losers of four in a row.  But these kinds of games pose special challenges, even to talented teams like the Caps. 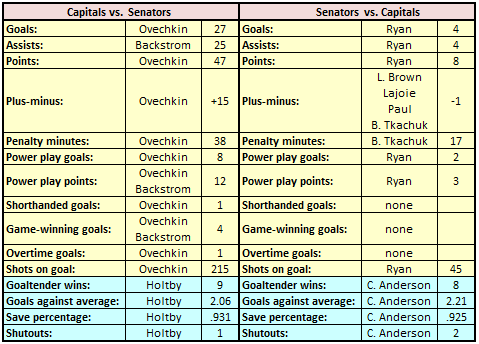 It seems that teams have are having troubles often have outliers on the positive side of things.  Sometimes it is a goal scorer, sometimes it is a goalie with a save percentage that outperforms his records.  With the Ottawa Senators, it is a player with a noteworthy plus-minus number.  The Senators have dressed only six skaters this season who carry a positive plus-minus rating into this game, and six of them are plus-7 or worse.  The outlier is forward Jean-Gabriel Pageau, who is a plus-16 on a poor team.  That is tied for 15th in the league.  The next best Senator in this category, Dylan DeMelo, is tied for 91st at plus-7.  Plus-minus has its limits as a statistic, but outliers serve to illustrate that there are good overall performances are being had from players, even on a team that struggles.

Not that Pageau lags in other statistical categories for the Senators.  He is second in goals (19), second in points (30) and is a team best 19.2 percent shooting among players dressing for at least five games.  Those 19 goals have already tied the career high he set in 2015-2016, and his 59-point pace would leave far behind his career best to date, 43 points in that 2015-2016 season.  Pageau also happens to be second among Ottawa forwards in average shorthanded ice time (2:33 per game), an illustration of his responsibilities on the defensive side of the puck.  The Senators depend heavily on his contributions, the team posting a 3-13-3 record in the 19 games in which he failed to record a point.  What he has yet to do in his career is record a point against the Caps.  He is without on, and is a minus-9, in 16 career games against Washington.

Ottawa has already dressed 11 defensemen this season.  Only two of them have dressed for all 42 games played by the Senators going into their game with the Caps.  They are very different types of defensemen, too.  Thomas Chabot is the “offensive” type, leading the Ottawa blueliners in assists (21),  points (25), and shots on goal (113); and serving as the triggerman on the Senators’ power play (seven points, all assists).  He is also the minutes eater for the club, averaging 26:22 per game, almost four minutes more than any other defenseman (Nikita Zaitsev: 22:31).  Nevertheless, he is lagging from the performance pace he set last year, establishing career bests in goals (14), assists (41), and points (55) despite skating for two more minutes per game than he did last season (24:17).  His ice time reflects some of the frustration the Senators have faced this season.  A struggling team often needs its offensive weapons to log higher ice times to keep them in or help them come back in games.  However, in 23 games in which Chabot skated more than 26 minutes (most in the league), the Senators are just 7-11-5.  On the other hand, they have not lost when he skated less than 22:30 in a game this season (6-0-0).  In four career regular season games against the Caps, Chabot is 0-1-1, minus-4.

The other defenseman to dress for all 42 games this season for Ottawa is Mark Borowiecki.  He is not a subtle player.  Over the last six seasons, including this one, no defenseman has amassed more penalty minutes than Borowiecki (575) and is fifth overall.  That penalty minute total would be much higher had he not missed 59 games over the previous two seasons to a variety of injuries and two suspensions.  This season has been a bit different for Borowiecki, though.  He has five goals already, a career high and matching the total he scored in 175 games over the previous three seasons.  He has 11 assists, another career high, as are his 16 points.  If his game hasn’t mellowed, the improvements on offense have come with a moderation in his play outside the rules.  He has 54 penalty minutes in 42 games, the 1.29 penalty minutes per game being the second lowest for a full season in his career (1.23 minutes per game in 52 games in 2017-2018).  Borowiecki has dialed it down even more in terms of games in which he has been penalized.  He logged penalty minutes in only 11 of 41 games to date, although the Senators have not suffered much for it, relative to their performance overall.  They are 5-6-0 in those 11 games Borowiecki spent time in the box.  Meanwhile, Ottawa is 7-5-2 in the 14 games in which he recorded a point.  Borowiecki is looking for his first career point against the Caps, having played 12 games against them with a minus-4 rating. 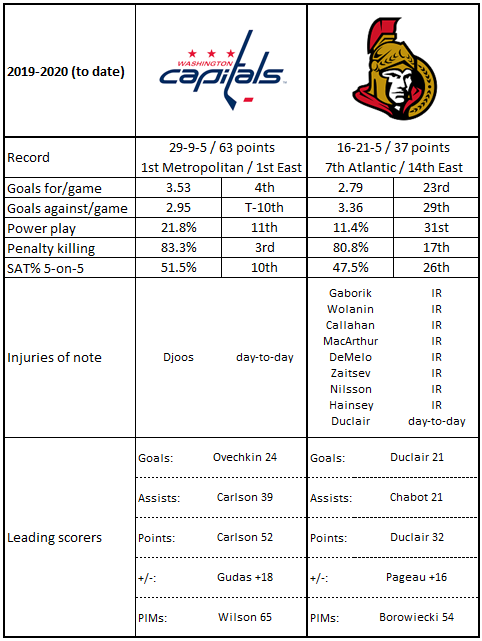 1.  Ottawa does not have a power play goal from a defenseman this season.

4.  In that same vein, no team has fewer first period goals scored on the road than Ottawa.  Their 11 goals are tied with Dallas for fewest in the league, but the Stars have played three fewer road games.

5.  Ottawa has allowed the fourth-highest number of goals on the road this season (83), and they have been consistent about it over the course of games – 28 in the first period, 27 in the second period, and 26 in the third period, with two more in overtime to reach the total.

2.  The Caps have scored six goals at 6-on-5 this season on home ice, twice as many as the teams with the second-most (Calgary and Tampa Bay).

3.  Only Boston has more wins on home ice this season when trailing after two periods (four) than the Caps (three, tied with three other teams).

4.  No team in the Eastern Conference averages more penalty minutes per game on home ice than the Caps (10:24); only Anaheim averages more overall (11:31).

5.  Through 43 games, 19 different Capitals have hit a post or a crossbar at least once.  All of last season the team had 20 players hitting iron at least once.  Jakub Vrana leads the team with eight misses of the hitting pipe sort (all hit posts).  Radko Gudas is the only one of 19 skaters playing in at least 20 games so far (including the departed Chandler Stephenson) not to have hit iron once.

At age 38, he is on the home stretch of his career, and one concession being made to that is a lighter workload.  Part of that this season is his having missed time to a lower body injury, but he still has started one fewer game (18) than Anders Nilsson (19), who himself has had to deal with injury, absent from the lineup with a concussion since mid-December.  Anderson has performed admirably in Nilsson’s absence, going 3-3-1 (one no-decision), 2.83, .910 in eight appearances.  However, he has spun out recently, losing his last three decisions (0-2-1) while stopping just 78 of 91 shots (.857 save percentage).  If Anderson gets the call in this game, it will be an odd departure of sorts.  He has logged only 66:49 in ice time on the road since Thanksgiving, none of it since December 7th.  That is largely due to Ottawa having a home-heavy schedule since December 7th (eight of 12 games), but it will be something to watch.  Anderson is 11-8-2, 2.46, .918, with two shutouts in 22 career appearances against the Caps.

Well, Caps fans, how do you like him now?  Having arrived in Washington with something of a “bad boy” reputation, Radko Gudas has been reliable and consistent, if not entirely rid of his edgy ways.  Yes, he leads all Caps defensemen in penalty minutes (34), but he is one of four Caps defensemen in double digits in points (13) and is on a pace to set a career high in that category (25) that would eclipse the 23 points he recorded with Philadelphia in 2016-2017.  The Caps have only lost twice in regulation in which he logged more than 18 minutes in ice time (10-2-2).

His physicality within the rules has been a feature of wins, the Caps going 18-4-2 in the 24 games in which he was credited with three or more hits.  They are 12-2-1 in games in which he recorded two or more blocked shots.  And on those occasions in which he has not been engaged in the offensive end, at least as measured in shots on goal, the Caps have still flourished, going 7-1-2 in the ten games in which he did not record a shot on goal.  He has picked up that offense of late, going 1-5-6, plus-6, over his last ten games.  Gudas is 1-6-7, plus-1, in 20 career games against Ottawa.

A weeknight game against a weak team, following up on a thrilling, historic come-from-behind win in overtime.  Gee, what could go wrong?  This is the very definition of a “trap” game, the Caps coming off that big win against San Jose on Sunday to face a team that is playing better than the prognosticators thought they might before the season started.  It is the sort of game that tests a team’s discipline and maturity.  The Caps have displayed a considerable amount of the latter, something to be expected from a veteran team.  It is the former – discipline – that has been the challenge.  It is the lack of discipline – the penalties taken, the wandering focus from time to time – that could allow the Senators a path to victory.  We like the Caps’ chances of blocking that path.