Alex Ovechkin
Theme: “Today you are You, that is truer than true. There is no one alive who is Youer than You.”
-- Dr. Seuss

But despite the fine numbers over five seasons, and the excellent numbers of the 2009-2010 season, that 2009-2010 season held the tell-tale signs of what might be a letdown. Behind the numbers were the pair of suspensions for overly aggressive play, the Olympic Games disappointment, the Stanley Cup playoff debacle, and generally a hit to Ovechkin’s reputation as the happy-go-lucky world-class talent with the gap-toothed smile.

Even in the numbers was the fact that despite 50 goals he would relinquish the Richard Trophy as top goal scorer to Steven Stamkos and Sidney Crosby – a product of scoring only eight goals in his last 21 games – and his Hart Trophy streak as league MVP would end at two. Ovechkin would win the Ted Lindsay Award for the third straight time and would be named to the first NHL All-Star team for the fifth consecutive year at left wing, but it was clear that he slipped a rung on his career ladder.

Which brings us to 2010-2011. From the looks of the start of the season, Ovechkin had put his 2009-2010 problems behind him. Ten goals – three of them game-winners – 25 points (ten coming on the power play), and plus-5 in his first 18 games. Another 100-point season seemed in the offing. And given that the Caps were 13-4-1 in those first 18 games, it looked like the team had set aside its disappointing finish of the previous spring.

But then the goals stopped coming. In his next 19 games Ovechkin managed only a pair of goals, 14 total points, and was “only” plus-2. The Caps were a lackluster 7-8-4 over that stretch, including the 0-6-2 streak that received such attention from HBO in the series running up to the Winter Classic.

The Caps broke out of that 0-6-2 stretch and righted their season with a new style of play that emphasized defense. But Ovechkin’s offensive output remained somewhat depressed, if not to the extent of that 19-game stretch in which he was only 2-12-14, plus-2. What was especially noteworthy was the absence of any production on the power play. After scoring two power play goals in Calgary in a 7-2- win on October 30th, Ovechkin would go 41 games without one, recording ten power play assists along the way.

Ovechkin recovered to go 13-21-34, plus-10 in his last 27 games, including five power play goals, but the mid-season valley in production left him with a season that by mortal standards was still productive. His ten-game splits look like this:

However, 85-points is not something fans have come to expect from Ovechkin, and the seven power play goals was barely half of his previous career low (ominously, a number he posted in the previous season). Given his own standard of production over his first five years, a tick better than a point-a-game season could only be considered disappointing. Here is how he compared to last season: 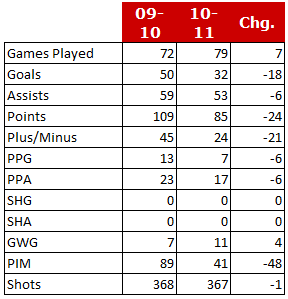 For a player with a history of big offensive numbers, a drop in production might be more palatable if, when the team he plays for adopts a more defensive style, that his other numbers reflect that. Well, at 5-on-5, Ovechkin averaged 2.03 goals against per 60 minutes (numbers from behindthenet.ca). At first blush, not bad. But that was good only for seventh among 13 Caps forwards who played in at least 20 games. And he was ninth in quality of completion faced in such situations. Couple that with the fact that he: a) skated with the third highest quality of teammates, and b) took 51.6 percent of his 5-on-5 starts in the offensive zone, and his defense could be fairly said to be “improved,” but not so much that he became a “two-way” forward on a team that had broader defensive improvement.

Odd Ovechkin Fact… In 2009-2010, Ovechkin racked up three major penalties (kneeing, two boarding) and three game misconducts on his way to his highest career penalty minute total (89 minutes). This past season, he would have finished under his lowest career penalty minute total (40, in 2007-2008), if not for his lone fight of the season (also his only major penalty), against the Rangers’ Brandon Dubinsky in a 7-0 loss on December 12th. He finished with 41 minutes.

Game to Remember… February 4, 2011. Having gone 41 games without a power play goal, Ovechkin finally recorded one at the 8:25 mark of the second period in a 5-2 win over Tampa Bay. In addition to the power play goal – the game-winner as it turned out – he had three assists, ten shots on goal (17 attempts) and four hits in 22:22 of ice time.

Game to Forget… December 12, 2010. In a 7-0 pasting at the hand of the New York Rangers, Ovechkin was the picture of frustration. Not only did a Caps losing streak hit six games, but Ovechkin failed to convert on ten shot attempts (four on goal) and tried – without success – to light a fire under his teammates with seven hits and by fighting Brandon Dubinsky after delivering a hip check to a Ranger. Things got so out of hand that he skated less than three minutes of the last period in the loss.

Post Season… Hard to see an obvious problem in terms of production. Ovechkin was 5-5-10, minus-1 in nine games. Even the minus-1 is a bit deceptive. He was on the ice for only seven of the 24 goals scored by the New York Rangers and Tampa Bay Lightning, and he was on the ice for only three of the 16 goals scored by the Lightning in the second round Tampa Bay sweep. One could say he needed to produce more at even strength (he was 4-1-5 in the nine games at even strength), but in the larger scheme of things, he was down the list of problems the Caps had.

In the end, despite decent numbers, another Eastern Conference top-seed, and another point-plus-per-game performance in the playoffs, the season was another one of disappointment. And when you are the captain, not to mention one of the top players in the sport, disappointment is the way you can become defined, even if hockey is a team sport, win or lose. It will still make things interesting to see how Ovechkin’s game evolves so that the label of “disappointing” doesn’t become “truer than true.”


Grade: B
(Photo: Jamie Sabau/Getty Images North America)
Posted by The Peerless at 10:59 PM No comments: